SPRING Is Sprung For U.S. Distribution By Drafthouse Films And FilmBuff 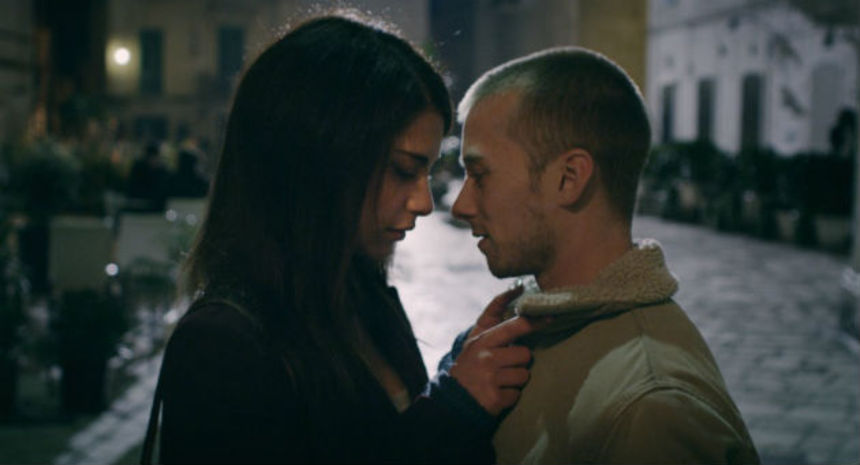 A mesmerizing picture that played very well in the heart of Texas at Fantastic Fest, Spring has been sprung for U.S. distribution by Drafthouse Films and FilmBuff.
Directed by Justin Benson and Aaron Moorehead (Resolution), the film follows a young man (Lou Taylor Pucci) who flees to Italy to get away from problems both personal and legal. There he catches the eye of an Italian woman (Nadia Hilker); sparks fly, and everything should be peachy keen, except for the dark secret she's harboring in her body.
The film enjoyed its world premiere at the Toronto International Film Festival earlier this month, where our own Kurt Halfyard issued his verdict:

By merging two wildly disparate types, the seductive monster film with the budding travel romance, Spring creates a something fresh, intimate and icky (seductive but baggage-laden) that overcomes the familiarity of either genre in increasingly satisfying ways.

Mr. Halfyard's review has more spoilers than I realized, but it's linked below if you are not adverse to such things. I saw it here at Fantastic Fest the other night, and found it increasingly compelling and not at all what I expected. It's a very satisfying movie to watch, and leaves behind a thoughtful residue. (That's not icky, right?)
Specific distribution plans have yet to be revealed. In a press release, Steven Beckman, Head of Content at FilmBuff, stated. "We have always been fans of Drafthouse Films and we are thrilled to be partnering together to connect the film with genre, art house, and broader audiences."
(Full disclosure: XYZ Films, in which ScreenAnarchy founder and editor Todd Brown is a partner, is involved in Spring. However, Mr. Brown was not involved in the writing or editing of this story.)
Sign-In to Vote
Tweet 0 Submit

Do you feel this content is inappropriate or infringes upon your rights? Click here to report it, or see our DMCA policy.
Aaron MoorheadDrafthouse FilmsFilmBuffJustin BensonLou Taylor PucciNadia Hilker

In terms of Spoilers in the review. It's a tricky film to review without saying SOMETHING, but rest assured the film executes both what one expects, and more importantly, what one doesn't expect, in equal measure....I don't think I spoiled the 'doesn't expect' part...

Also note that Canadian distro is the ever-growing RAVENSBANNER imprint! As well as other territories also have distribution: U.K. (Metrodome), the Middle East (Falcon), and Japan (AT Entertainment).

Loved this film. These guys have a great, unique sensibility.