Destroy All Monsters: Don't Leave Me Alone In GAME OF THRONES' World 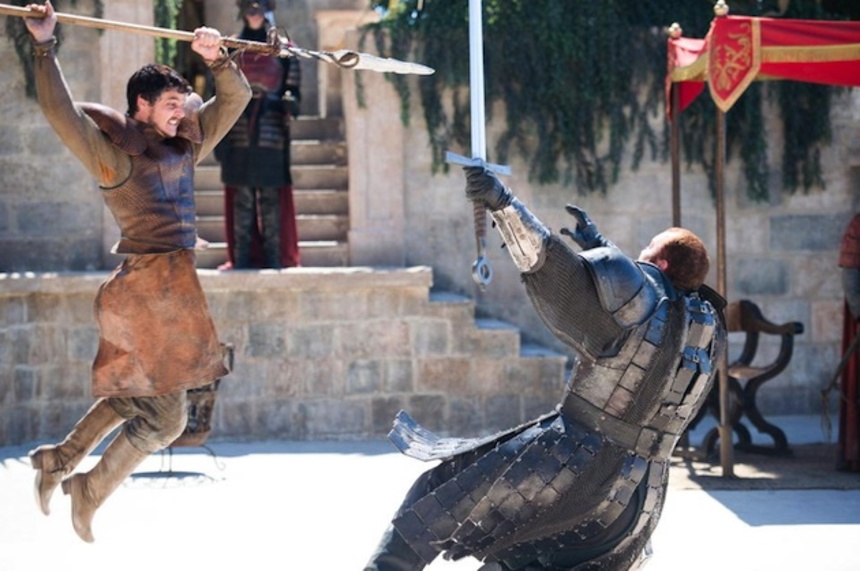 Spoilers for the latest episode of Game of Thrones.

At two points in "The Mountain and the Viper," the 8th episode of this season of HBO's Game of Thrones, characters express a kind of revulsion at the idea of remaining in the world they inhabit. This, based on all we've seen, is understandable. For all its talk of various gods, it's unclear whether any benign force governs the Thrones world at all. If the only true god of Westeros is George R.R. Martin, he is a malign one.

"Whoever dies last, be a good lad and burn the rest of us," Dolorous Edd Tollett intones when contemplating the imminent sacking of the Wall by the forces of Mance Rayder. "Once I am done with this world, I don't want to come back." He is speaking of the White Walkers and the seeming power beyond the Wall to create ice zombies of those left behind, but the performance and the tone suggest a deeper, nearly depressive, distaste for life in Westeros.

It's inescapable in Season Four of GoT, underlined by striking visual and contextual moments throughout the year so far, from the final shot in the season's first episode (in which Arya and the Hound begin their journey across a burned and wasted countryside, the aftermath of the War of the Five Kings) to the rightly-criticized frenzy of rape and carnage at Craster's compound under the turncoats' regime.

"Don't leave me alone in this world," Ellaria Sand implores her lover, Oberyn Martell, before he faces the Mountain in single combat at the episode's climax. She seems to be taking a page from Edd's book, expressing less a concern for the potential loss of her paramour (though she certainly feels that, as well) than simply the horror at being stuck here - in King's Landing, in Westeros, in life itself - without him.

I don't blame her. Martell, brilliantly enlivened by Pedro Pascal, has been the highlight of Season Four. His head popped like a ripe grape mere minutes later, I find myself wondering why I'd bother continuing with Game of Thrones' machinations at all. Westeros is fast becoming a land absent its most scintillating personalities.

Martell's death is, far and away, the most spectacular and gruesome moment of earthy violence in the series so far, even at its most operatic. It is a triumph of measured tone on the part of Alex Graves, the episode's director. Graves stages the majority of "The Mountain and the Viper" in shadows and whispers as we move through the rest of our narrative collateral, and then arrives in the arena for the episode's final scene with the straight visual relief of a sudden, enormous burst of colour and light.

There is more ambient noise. There is an explosion of onscreen movement as Martell whirls through the air like a sprite. And then, in a truly excruciating coup de grace, there's a turn-it-up-to-twelve amplification of body horror as the Mountain grabs the Viper, sticks his thumbs in his eye sockets, and sends a nimbus of blood and shattered bone spraying outward from around the shrieking Viper's skull.

The subsequent shot, as Clegane falls away from Martell's mutilated body while a nimbus of dark blood spreads above the Dornishman's neck, is as breathlessly painterly as it is comically grotesque, and it's Game of Thrones' darkening worldview in a single, horrifying beat.

The series has begun to feel like the conveyor belt in Toy Story 3, bearing all of its characters to inescapable, fiery doom. That Martin (and his proxies, showrunners David Benioff and D.B. Weiss) are content to remove players from the game board at any given moment has long since been established. That there might be anyone left in whom we have the smallest amount of emotional interest by the time the story's climax arrives, however, remains up in the air.

It's the darker side of Angel's most sublime joke, in which David Boreanaz's undead investigator asked to be taken to Hell and was brought, instead, to the ground floor of his office building - because (in the Whedonverse's view) the infernal afterlife is where we're living now, if you choose to look at it that way.

In Game of Thrones, though, there's no choice in viewpoint; there are simply those who recognize their world for the unredeemable mess of human failings that it is, and those too naïve to yet see it.

This is not a world with gods or afterlives. It is the horror of a truly atheist fantasyland. Perhaps that's why there are dragons and sex (consolation prizes), and nary a single unpunished good deed.

I reiterate my contention from last season: the series is better than the books, and Season Four is the best example thus far, and "The Mountain and the Viper" is the best example among the examples. Hovering at the knife's-edge between the content Martin has previously written and the story area that Benioff and Weiss will need to work through on their own, the series has finally learned the value of owning its own reality.

The series feels lived-in, and scarcely feels like an adaptation any more at all. Episodes this year have all been made up of scenes that feel as though they would have occurred naturally to the showrunners with or without Martin's map (and some of the better ones, of course, have been wholesale inventions).

Another contention: Martin will never publish another one of these books, and the next, last three seasons of Game of Thrones will be a complex and fascinating process of seeing how much Benioff and Weiss will take away from their source material, as they drive towards their own, very dark ends. I do not think Westeros is a land that will bear any happy endings.

Do you feel this content is inappropriate or infringes upon your rights? Click here to report it, or see our DMCA policy.
Game of ThronesGeorge RR MartinOberyn Martell