Destroy All Monsters: Dance, Clones! It's All Television Now 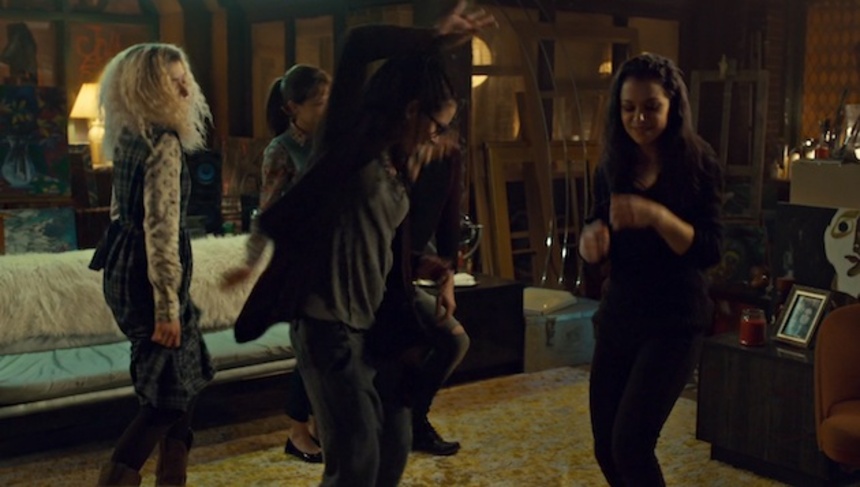 Movies are imagery, and the best of them supply the images by which we contextualize our lives; and if this is so, 2014 is fast becoming the year those images came more from the small screen than from the big. Your line in the sand on this may vary, but TV is becoming pop culture's standard-bearer. The movies are adapting to keep up.

Hannibal Lecter turning his face skyward to bathe in newly falling rain. Ray Harryhausen skeletons attacking Bran and company on a frozen lake, the first time in Game of Thrones history that a Bran scene was the highlight of an episode. Sarah and Helena, the clone twins of Orphan Black, going on a road trip, singing "Sugar Sugar." Rosa, mowing down Vee in her getaway van, before driving free and transforming onscreen into her younger self in the last episode of Orange is the New Black. Hell, even the dick joke in the Silicon Valley finale, hastily scribbled on a white board, will follow this culture around for a year. This has been our 2014, and it's not yet half over.

Lush and unabashedly lustful, Hannibal exited its sophomore year by leaving the majority of its principal cast near death after an exquisite showdown in the home of the eponymous character. As with all things Hannibal, it was an art crime of constructed selves. The principal soul hanging in the balance was, as always, Hugh Dancy's aching Will Graham - a man with an empathy disorder who can profile psychopaths just fine, thank you, but never without risk of empathizing so closely as to become one himself. The Machiavellian endgame for Season Two saw Will arrive, in "Mizumono," at a true sense of self - but at the cost that only Hannibal can extract.

In a season whose high point saw the character (via some dreamily logical montage editing) seem to partake in a half-imagined sexual threesome with his bromantic other, Hannibal Lecter, the finale snapped all the lines of force that have been accumulating till now - even the season-long runner of Jack and Hannibal's flash-forward knife fight - and revealed, at last, something like a true slice of Dr. Lecter's soul. "I let you see me," Hannibal admits to the man with the empathy disorder. "I gave you a rare gift, but you didn't want it." As a series, Hannibal played coy with its own empathic frame, but only to underline its main point: the instability of the self. It's a richer idea, by half, than anything in the movies (or the books).

If, as Roger Ebert claimed, film is an empathy machine, then television is rapidly taking over the gears. The AV Club rightly points out that the key strength of Orange is the New Black's weighty second season was its empathic focus, allowing no character's point of view to fall below its moral attention.

It might have taken Orange longer to find its legs than many of its proponents will admit, but when it got there, it really got there. The second season is a vivid portrait of an ecosystem under threat, all thanks to the arrival of Vee (the fascinating, lizard-lipped Lorraine Toussaint). She is the unstable reagent who gets introduced to the chemistry at the beginning of the season, and proceeds to fuck literally everything up.

With the exception of two, brilliant offside runners - the Morello-is-a-stalker reveal, and the entirety of Rosa's subplot, which is nothing shot of sublime - everything that makes Season Two work comes as a result of the instability that Vee's presence introduces into the prison. The gang war between white, black, and Hispanic factions might seem like an obvious plot device for a prison show, but it is faithfully, absorbingly drawn from - and driven by - character. It therefore achieves what the first season never could: it perfectly delineates all of the members of OITNB's outsize roster, and gives reasons to connect and empathize with all of them.

Tastee and Poussey's falling out and reunion, Piper and Larry and Polly and Alex's weirdly affecting love quadrangle, Healy and Pennsatucky's support group, Red's new approach to family, Caputo's horrifically lewd blow job "joke," even the finale's "Nuns - Run!" line... these gradual setups and payoffs, co-minglings and corrosions, are the stuff that make great television great. It's longform at its finest, using the scope and reach of hours of serial drama to delve into, and enrich, thematic weight.

But the best show on television, the show that makes me believe that this golden era of the medium is still only approaching its zenith, comes with a flash of hometown pride: it's Toronto's own Orphan Black, and its twenty episodes thus far are all the evidence you need of an art form ascendant.

A semi-sci fi, semi-procedural thrill ride through a kind of infernal version of Toronto's permanent onscreen namelessness - even the CN Tower gets castrated in any shot it is unlucky enough to appear in - Orphan Black is dizzyingly enjoyable as a mystery series on its own terms. When considered against its basic production realities, however (like, for example, the fact that its tale of cloned women means that high-performance super-actress Tatiana Maslany plays better than half the principal characters), Orphan Black becomes something like a form-defining achievement in television.

The series' second season finale aired this weekend, opening with a sequence that made chewy text out of much of the series' understated subtext, as main clone Sarah was taken into the Dyad Institute and hailstormed with questions about her sexual and reproductive history - control of her body literally signed over to bureaucratic others in her efforts to retrieve her biological daughter from the week's latest snare. As is usually the case with Orphan Black, "By Means Which Have Never Yet Been Tried" demonstrated that the series' weekly millennial intrigues are one thing, but its graceful dips into thematic quandaries around a woman's right to maintain jurisdiction over her own body inevitably drive its much more unsettling weight.

As usual with the best longform stories, though, both of these elements are trumped by Orphan Black's simple ability to get inside the heads of all of its characters (clone and non-clone alike), weaving their lines of connection across one another into the finest of tapestries. The series is endlessly inventive with the potential of its core concept. Having featured, earlier in the season, a sequence in which crazy clone Helena joined her twin sister (sorry, saestra) Sarah on a road trip / fact-finding mission - a perversely sweet and abjectly hilarious aside for a series which only seemed to be beginning to muster its core strength as a storytelling engine - this weekend's season finale upped the genetic ante considerably, via the clone dance.

It was a sequence in which four of Orphan Black's five main clones (plus the kid, plus the saestra-brother) hung out together and partied, and it wasn't the visual effects proficiency that made the scene (and the episode) sail clear to the top of the series' achievements. It was the complex and faithful delivery of each character's season-long beats into something that played onscreen like visual music, via the rhythm of that dance. Maslany has said that she uses dancing to get into the heads of each of her lead performances before going onstage; now, vividly onscreen, we see what she means.

Orphan Black is virtuoso storytelling of the highest order, a clever high concept which the producers are now elaborating so finely as to extract every single drop of meaningful juice out of an already meaningful idea. There is no better example of this than the Helena character, the crazy Ukrainian clone raised by Eastern European religious fanatics. Over the course of the second season, Helena has become proof that the character you hate and fear the most in the first season (in which she served as the principal villain) can become the one you'll be crying for by the end of the next evolution of the story.

When Helena arrives at Clone Club and has painstakingly heartfelt first encounters with two of her clone saestras, the precision of the architecture by which performance (entirely by Maslany), direction (by series co-creator John Fawcett) and writing (by other series co-creator Graeme Manson) overlap is stunning. All of the components work together, over the course of the minutes that follow to play the richest chords of a very rich series. Helena is a sad, frightening, hilarious, wonderful creation, and that she is just as capable as any of Orphan's large and varied cast of holding the center of our emotional engagement is a testament to the size of the production team's accomplishment.

(Maslany's achievement can't be understated here. She isn't just playing the most complex female character on television, she's playing several of them - and a transsexual male, for kicks.)

The paradigm as a whole seems to be tilting increasingly towards these layers of longform depth, on television and the big screen. There isn't a single thing happening on TV that isn't being aped, albeit rudimentarily, by the ruling film franchises of the day. How To Train Your Dragon pitches its multiplex tentpoles four years apart and runs a line of television episodes in between to carry the ballast; so does the even more complicated multi-platform interplay of the Marvel Cinematic Universe and, one imagines, the forthcoming Star Wars reframe. If Dawn of the Planet of the Apes proves anything (or, if it ever gets made, Ghostbusters 3), it's that franchises no longer have finite limits; they can continue to extend and regurgitate themselves forever in an ultra-longform story that never ends.

None of these big-screen series, though, can achieve (yet) what these boutique television shows - each running roughly a dozen episodes per season, conceived and written en masse for better thematic cohesion - have accomplished on the small screen. As moviegoing splits down the center between the mega-budget mega-franchises and what used to be called "art films," television is striding confidently up the middle with ever more finely-wrought storytelling. The big screen will learn by its example, or fall.