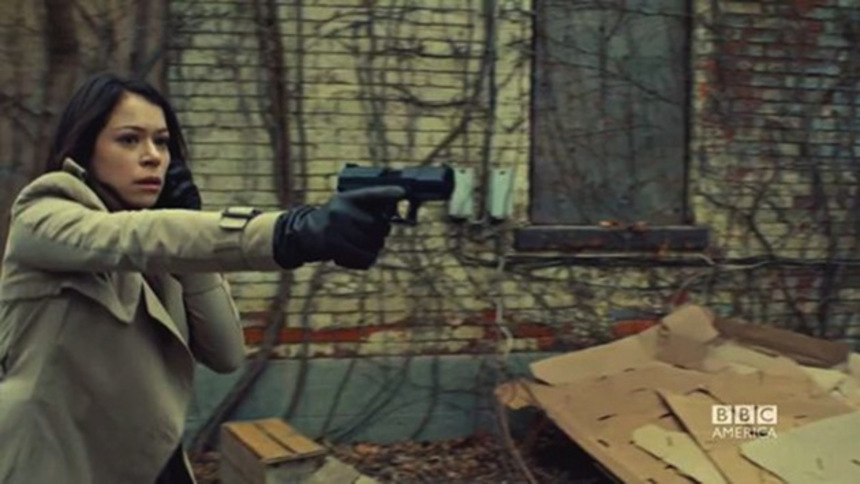 After a strong debut and a second effort that dipped a bit while retaining a sense of what made the launch so appealing, episode three of Orphan Black spends the first two thirds of its running time pretty much completely off the rails. Were you to have made a list of danger zones for this show based from the premise alone this episode pretty much hits them all. It was more than a little wobble, it was just plain bad, and yet somehow the final act managed to regain footing and end as strong as anything the show has shown so far.

So where were the issues?

Clones Alison and Cosima have failed to develop one iota as characters and both are wafer thin 'types' far more than actual believable people, dropped into the action seemingly purely to spout exposition at Sarah and give her the information she needs. They're not characters, they're narrative conveniences and that's a problem.

And speaking of convenience it must be said that - at least for the first two thirds - the crazy balancing act of Sarah trying desperately to maintain her bluff and convince people that she is Beth was tossed entirely out the window in favor of jaw droppingly ridiculous quick solutions that stretch any sort of credibility. "Hey, IT guy! How about you do my entire job for me and don't tell anybody?! Good? Awesome!" Really? Really?

And - again, first chunk only - Felix is reduced to stereotyped gay jokes. Beh.

Part of the frustration, honestly, comes from the frustration of seeing such incompetence - let's call it what it is - squander an amazing premise that should have played out so much better than it does. This week we start up with Sarah-As-Beth being reinstated to the police force where her first assignment is investigating the mangled body of a young woman discovered in a quarry. Yup. It's Katja, shot-through-the-head clone who Sarah buried in what she thought was a remote patch of woods but was actually the edge of an active quarry. And let's just ignore the fact that she FAILED TO NOTICE THE ENORMOUS QUARRY right next to her as she buried the body in the first place. Actually, let's not. That's pretty inexcusable.

Anyway, great start. And given that the killer who took out Katja starts calling in to taunt the police, well, it should be getting even better. But it doesn't because this one just keeps dropping the ball at every available opportunity, something that lies right at the feet of director David Frazee and writer Graeme Manson. It's just not good and I don't understand how everyone failed to notice. And it continues to be not good right up until the point that Sarah-As-Beth and cop partner Art manage to track down the mysterious shooter incredibly easily because said shooter - remember, a crack shot who laid in wait to snipe from a distance - was stupid enough to do the deed on a stolen motorcycle and then park said stolen bike directly outside their own door. Because, clearly, this is the sort of thing that killers do when they don't want the police to find them. Grr.

It's pretty awful and only the strength of the pilot kept me from shutting down at that point, honestly, and then ... bam! Suddenly things get good. Like, real good. Sarah is thrust into the middle of a live crime scene with a dangerous opponent, forced to go forward despite a complete lack of training and inclination to do so if she's going to maintain her cover, and Tatiana Maslany plays that moment perfectly, the conflicting urges and emotions playing out on her face and through her body as Art comes under fire and she's forced to give chase to her unknown assailant. And then there's the reveal on the actual killer. Should've seen it coming. Didn't. And it completely alters the understanding of what's really going on here, who has been tracking the clones down, and why.

So. Big peak. Lots of valleys. Direction next week is back in the hands of series co-creator John Fawcett, here's hoping he gets it back to the level of the earlier episodes.