Review: ORPHAN BLACK S1E04, EFFECTS OF EXTERNAL CONDITIONS (Or, Someone Call The Dermotologist) 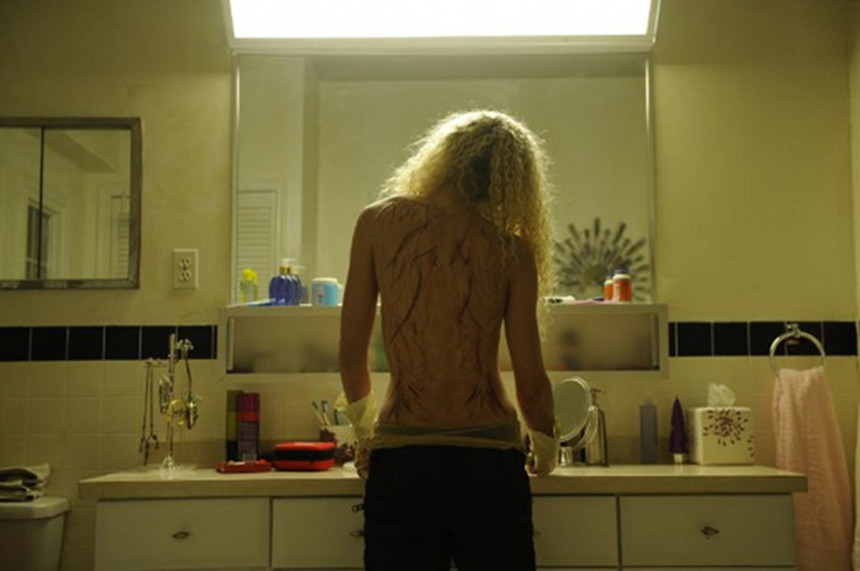 Right. Having gotten through the breakneck premiere (excellent), the rule setting second episode (solid), and then through the transitional third episode, taking us away from premise and into the format and story arc that will presumably drive the rest of the show (horrible start, excellent finish) we have now reached the meat of Orphan Black, the point of the series where we are over the suspension-of-disbelief hump, we've got a feel for the principal characters, and the time has come for the show to settle into a rhythm and simply be what it is and tell its story as well as possible through until the end of the season and possibly beyond. And if episode four shows us what we've got in store from here on out then what we've got is something really quite strong. the transition was rocky but now that we've arrived it would appear we're in for a pretty entertaining ride.

So where are we at? For one, we appear to be at an end - at least for the immediate future - of introducing new clones. The four we've got - Sarah, Alison, Cosima and Helena - will most likely be what carries us through until the end. We've also gotten rid of many of the side distractions for Sarah: No more plans to bolt at the first opportunity, no more scrambling to get the money back from Art. Instead we have a character invested in the story playing out around her, trying to do her best to sort out what's happening and become a worthwhile parent to her daughter while the show also drops hints there may be something rather unusual about that daughter which will play out in the future. This is all addition by subtraction, the elimination of distractions that allows the show to focus on doing what it does well and bolstering what it has done poorly thus far.

On the bolstering front Alison is finally becoming an actual character as opposed to an information dispensing stereotype. She's got a ways to go, yet, but she's gaining a bit of depth. Cosima is still there just to spout the occasional bit of information but her presence is also greatly reduced overall so it doesn't stick quite as badly with her. Felix is still played a touch broad - the naked painting scene stands out on that front - but is also showing greater depth as an emotional resource for his sister. And these are all good things ...

As for improving what it already does well? Well, for that you need a touch of the story.

We begin with Killer Clone - later identified as Helena - performing surgery on herself to repair the damage done by Sarah and her well placed bit of rebar in what proves to be the bathroom of a house she has broken into, a fact we learn when the young boy who lives there wanders through her blood for a late night toilet break. The meeting doesn't prove tragic but does lead to a game of cat and mouse in which Helena arranges for a meeting with Sarah, who she believes is somehow different than the other clones.

Helena is a strange, magnetic beast - a religious fanatic with a direct tie to the women killed by Beth prior to the series starting up. She's also clearly part of a larger organization - identified by a fish symbol engraved on the hilt of her knife and branded on the back of dead-woman Maggie's neck. Why she is obsessed with Sarah is not quite clear, though Alison's reaction to learning Sarah is able to have children may provide a significant clue.

So here's where Orphan Black really excels and what it did remarkably well in this episode. It all comes down to star Tatiana Maslany's ability to not only take on a multitude of characters but also to convincingly portray one of these characters impersonating another. This particular episode features Sarah-Being-Beth, Helena-Being-Beth and Alison-Being-Sarah, a scenario that should be hopelessly confusing but amazingly is not with the distinct personalities of each coming through. It's developing into a nicely twisty conspiracy thriller, too, which is certainly a good thing but the show begins and ends with Maslany, really, and two of the personas she is now playing - Sarah and Helena - are already immensely interesting with a third - Alison - starting to move into some stronger territory as well. The plotting here was tight, the reveals teased out well, the forays into questions of identity interesting and the performances strong.

If you've not started into Orphan Black yet I do recommend going back and catching the earlier episodes to give it a try. Forgive the initial clumsiness of episode three and I think you'll be well rewarded. And for those who are watching: Am I the only one whose immediate reaction to the person scooping up the fallen Helena and loading her into the van was "Oh, that's Paul"? Time to start keeping an eye open for jewelry ...