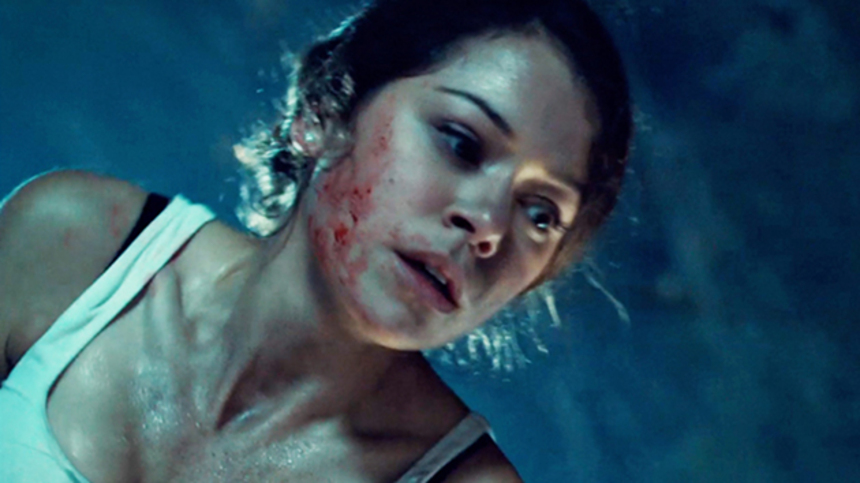 While it is true enough to say that the second episode of fledgling BBC America hit Orphan Black is somewhat calmer than the hyperkinetic pilot it is important to note that 'calmer' is an entirely relative term. And in the world of Orphan Black 'calmer' entails an episode kicking off our leading character Sarah (Tatiana Maslany) frantically driving a car owned by the dead Beth (also Tatiana Maslany) out of harm's way while taking gunfire and talking on the phone with Alison (also Tatiana Maslany) with the recently deceased Katja (also Tatiana Maslany) slumped across the back seat with her blood and brains spattered all over the interior of the vehicle due to the aforementioned gunfire.

For those keeping score that's two dead Maslanys and two live Maslanys within the first sixty minutes of the series, and there are more coming. Live, for the time being, but some will no doubt soon join the ranks of the dead.

Having hurtled full tilt into the chaos of Sarah stumbling into the midst of a strange and deadly mystery in episode one, episode two is where it comes time for Sarah to unravel things a bit. Yes, she's still intent on grabbing Beth's cash and running but with things proving difficult on that front - Beth's justifiably suspicious partner has grabbed the bag of cash and is keeping a close eye on it - and the fact that someone has just shot her identical duplicate in the head, Sarah has both the time and incentive to work out at least a little bit of what's going on.

And here's where we can get the first elephant out of the room, or at least make explicit what has so far been implied and assumed. These are not twins separated at birth, these are clones - deliberately created and now being eliminated, presumably by the people responsible for them in the first place. The dead Katja had a briefcase full of documents and blood samples in her possession pointing to a handful more than the trio Beth had already dug up while also having the street address of Alison, whom Sarah was already aware of via Beth's own research.

What's clear about Orphan Black thus far is that the success rate of the show from episode to episode is going to be highly dependent on its ability to edge up as close as possible to the line between camp and believability without crossing over. The pace of the first and Maslany's commanding performance kept the premiere firmly on the right side but things here are a bit more touch and go. Sarah's drug dealer boyfriend Vic is in this episode far less than the first - a good thing - but has less purpose, which makes him stand out more as a negative. Felix is less overtly camp than in the premiere, which you would think would be a good thing for the tone but the campness was so far over the top at first that it was actually a perverse sort of positive while now he has a bit more nuance - good - but less 'Did he really just do that?' - bad - and more 'Why isn't he pressing his sister a wee bit more about the BIG SMEAR OF BLOOD across her face?' - also bad. And while Maslany remains remarkably strong as both Sarah and Sarah-Being-Beth her performance as Alison - an uptight soccer mom - feels a bit shrill.

As should have been expected the weaker or more difficult elements of Orphan Black have become a bit more evident now that the show is slowing down into a more story oriented mode after the frantic action of the debut, but along with the wobbly bits it is also showing some interesting developments within the storyline itself and some positive developments in key characters, including positive developments for Felix and Beth's police officer partner Art. So while episode two is not a knockout it remains easily enough to fuel continued interest and curiosity about where this is all going and how many characters Maslany can possibly play simultaneously.