Despite its massive cost-overruns and being sniggered at by the press upon its release, World War Z was actually profitable, doing decent business across the globe. Me, I like the film, even though it still seems unfinished, and the design materials only point out how much epic potential has been missed. But it has a couple of great moments, and the unrated version actually provides just enough gore to qualify for the genre. So I wanted to buy the Blu-ray for my collection.

Now when I buy a film on Blu-ray these days, I always go for the 3D option when given half the chance. I mean, if it's THERE, why not? In the case of World War Z this proved problematic as the Dutch 3D version was gone from shops in no time. Oh well, since it's a Warner Brother film, any of the nearby countries was a safe bet to find the exact same disc, and therefore I started looking around Europe. Which is how I came across the French Limited Edition, and had to do a double-take.

Apparently the French liked the film better than most people did. Either that, or they are genetically incapable of NOT giving a film a great-looking release? 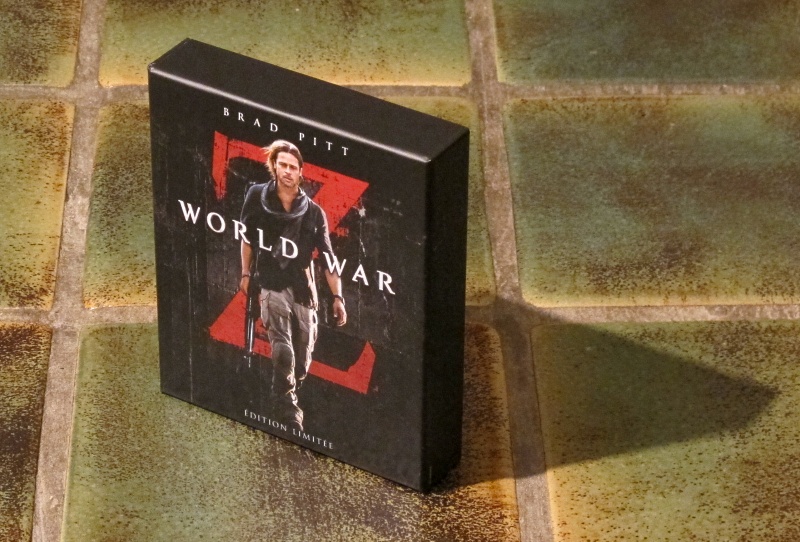 Here it is: a sturdy cardboard box, looking scuffed on purpose. The Walking Brad is on the front...(continued on next slide) 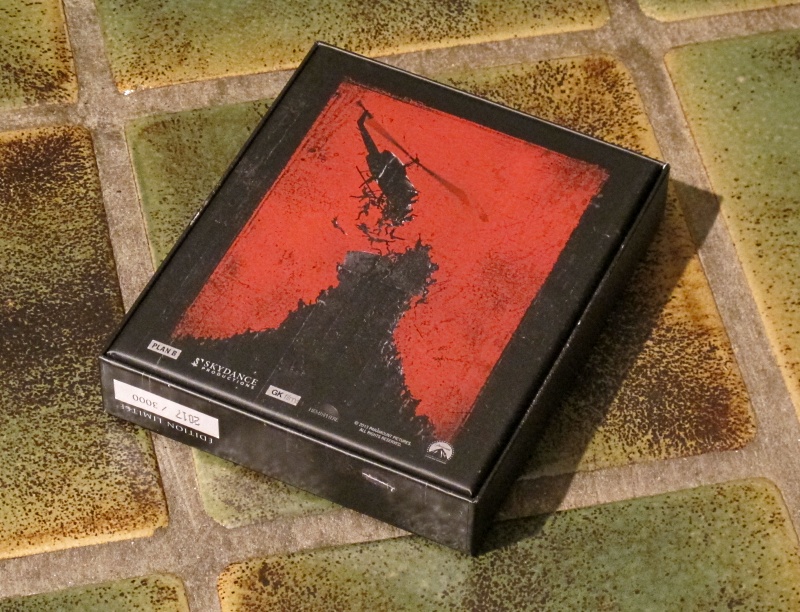 (continued from last slide) ... and "helicopter versus Jenga zombies" is on the back!

Me, I probably would have switched the two images, but hey. The French love them some Brad. 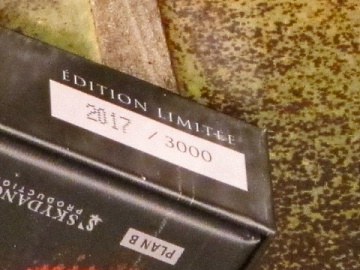 They're not fooling around with that whole "Limited Edition" thing: there are only 3000 of these. I've noticed the online price for this is going up as well. The current amount sure is not what I paid for it. 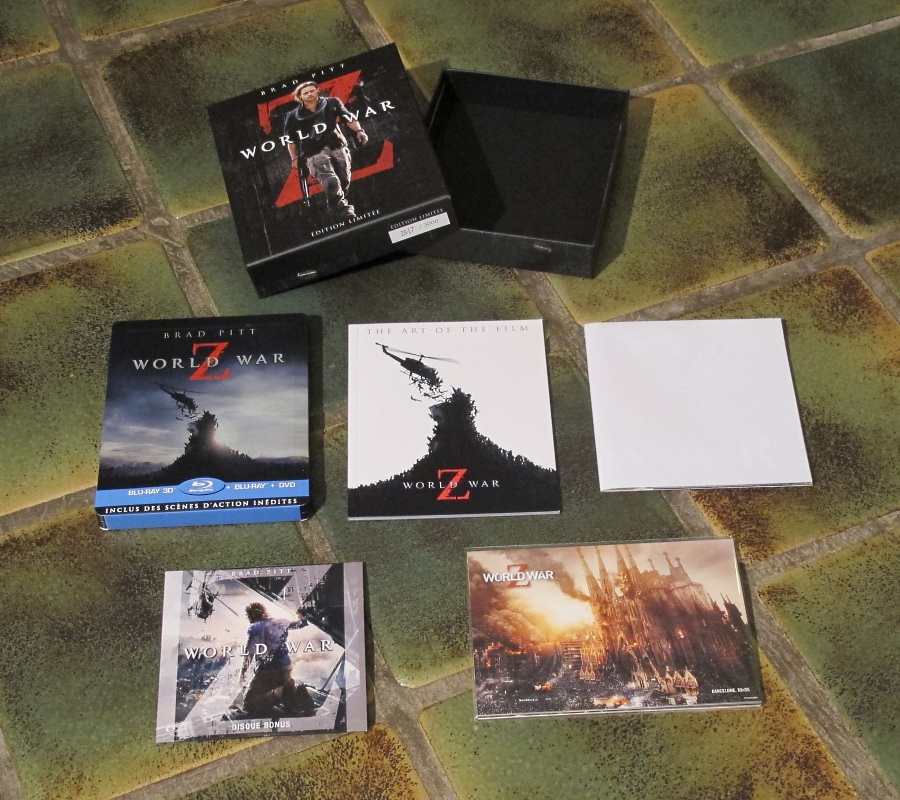 "What's in the box?!!" I hear Brad Pitt yell in my mind. Well, there is the steelbook of the film in 3D and 2D Blu-ray, the (2D) DVD, and these are all regionfree, with a wide selection of subtitles (remember that Warner Brothers, the world's largest distributor, does NOT believe in regioncoding as a valid method against piracy, and refuses to use it). There is also a very amusing DVD showing a long on-stage discussion between zombie experts, Max Brooks and George Romero stealing the show for an hour.

The physical extras are: a set of cards, a 48-page design booklet, and a poster. 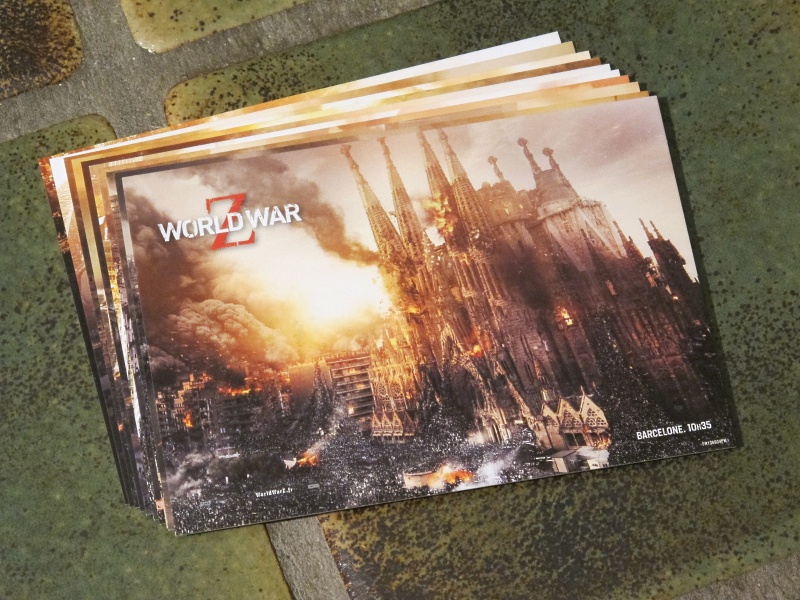 Those cards look really good by the way, and there are plenty of them. If only most of these images had actually made it into the movie... 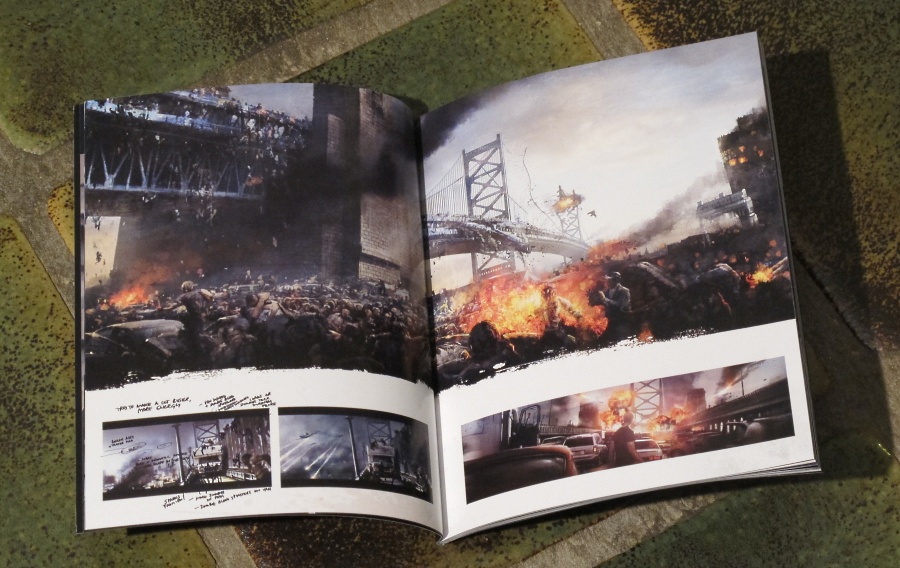 The booklet is really nice as well, an excerpt of the bigger art-book you can buy separately. But again, there are many images in here for which you'll think: they made a 200 million dollar zombie film, and they left this out?! It almost makes me hope for a sequel... 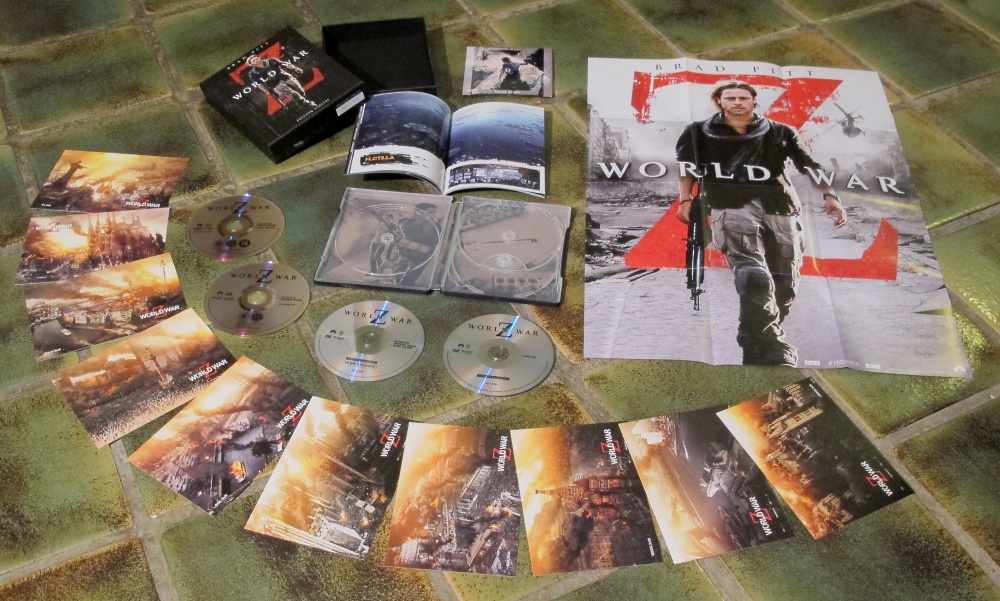 The whole shebang! Flawed film and all, I truly like this edition a lot.