TTTT: WORLD WAR Z As A Taut Thriller; THE BLING RING As The Right Movie At The Right Time

It's the end of the world as we know it, and Brad Pitt does not feel fine. He's separated from his idyllic family, mindless automatons are quickly devouring the known world, and he's sporting his worst haircut yet.

But worse than any of that, his movie about all of that has gone wildly over budget and out of control, leading to a now-ingrained legacy of bad press. Indeed, it does seem like we've been hearing the horror stories of the trouble-filled making of World War Z since George Romero last made a zombie picture of his own. News of massive plot revisions, entire filmed sequences being excised, and all manner of inflated production woes have lent bloody credence to speculation that Pitt (who just previously wrestled the production-troubled Moneyball to a decent finish) may be spearheading and starring in the new Most Expensive Movie Ever Made.

Of course, that was also the story with Titanic back in the mid-1990s. The fact that Cameron's massive endeavor proved to be an engaging, sweeping experience quickly sunk all the pre-release skepticism and ill-will. Can the same possibly be true of World War Z? (Unlike Titanic, WWZ is a horror-thriller as opposed to a historical romance with a widely known ending. But like Titanic, both niches sound equally unlikely to achieve "megahit" status. Also, both are faux reality.)

In his review, ScreenAnarchy's Kwenton Bellette expressed his negative opinions about the movie, noting among other things: "This is the kind of movie that assumes the audience are morons." My opinion was far less harsh; though the movie fails to be a total home run -- it's closer to a triple, in baseball terms -- it is otherwise altogether satisfying, part George Romero, part Contagion.

Director Marc Forster (The Kite Runner, Machine Gun Preacher) is an unlikely a choice as any to helm a tense apocalyptic zombie movie, but he steers a surprisingly impressive completed package into the dock. While I have some issues with the ending, which feels quite abrupt, it didn't bug me all that much because everything that came before it is as taut as taut could be.

With Brad Pitt in the lead role, it's no surprise that World War Z operates as a tightly-engineered Big Fat Movie Star Vehicle, although such an approach does deviate a bit from Marc Forster's earlier career methodology. (Did anyone EVER look that good during Monster's Ball?) But then again, Forster also made a Bond movie (Quantum of Solace), itself an even more glaringly odd entry on his otherwise harsh-reality driven filmography.

Still, he brings a lot of his established harsh reality tropes into WWZ, which are utilized effectively to sell a certain immediacy and even authenticity in the storytelling. This being the largest-scale zombie apocalypse ever brought to the screen, there should be an audience expectation for accordingly heightened chaos and urgency. Forster fully delivers on this front. 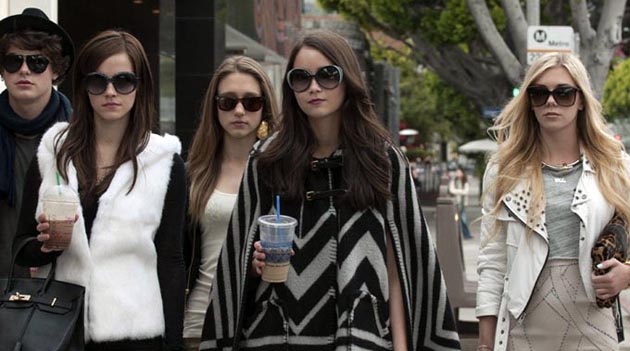 Even more successful in terms of delivering on audience expectations -- at least mine -- is Sophia Coppola's The Bling Ring, which is now playing in wider release.

Our own Ryland Aldrich had real problems with the movie, feeling that Coppola "just takes us on a 90-minute vacation into their fun-filled lives of coke-fueled clubbing and slo-mo selfies," rather than providing any conflict or using character development "to teach the audience what went wrong with these kids (or, say, generation)."

I found it to be the right film at exactly the right time. Through its obliqueness, it is one of the year's most accomplished, thought provoking, and vital films to date.

It's based on a bizarre true story from 2008 (later chronicled by Nancy Jo Sales in a Vanity Fair article) in which a pack of upper-crust L.A. teens effortlessly got into the homes of Rachel Bilson, Lindsey Lohan, Paris Hilton, Orlando Bloom, and other travelling rich and famous individuals, then pillaged and pilfered to their hearts' content. These girls (played by Katie Chang, Claire Julien, Taissa Farmiga, and Emma Watson) are on a first name basis with the celebs they rob. Completely vicariously, but a first name basis nonetheless.

There's a very odd, mutual false invincibility shared between the thieves and victims. The wealthy (victims) enable such theft by clearly not investing in any kind of sensible home security (not even an imposing dog - the only pooch seen is one of Hilton's prop pups, itself nearly pilfered along with the untold gobs of jewelry, shoes and whatever else was so lustfully trotted out throughout a recent documentary on Bergdorf's, this film's empty and wrong-headed counterpoint.

The girls, meanwhile, never stop to question their actions, as the ubiquitous fame of these ever-present media darlings have concocted some sort of implied mi casa su casa assumption. Like a two year old who watches a Batman cartoon and then spends the rest of the week wearing a cape and screaming "I'M BATMAN!!!!," so too is the case with the Bling Ring participants.

Conformity, sameness, attention and imperviousness - these are the drugs they crave, and the world is just crazy enough to grant them their conflict-ridden desires. At least, for a while. The whys and what-fors of their fixations are revealed only visually. Consider the unspeakably fancy sports car they at one point swipe. It occupies its frame as though it suddenly exists in a magazine ad, one of those double page spreads with the car in balanced profile, a perfect object of vehicular desire. They, of course, take it like it's nothing.

But there is also a boy in the mix, Marc, played by Israel Broussard. Marc is unique in all the film for being the singular character that Coppola, and by extension the audience, has any sympathy for. Although he repeatedly enables the gang by Googling their targets homes and tagging along on the raids, he's never not worried about getting caught. His perpetual fear is trumped only by his blissed-out allure to the chic belongings: "Oh wow... Oh wow... Oh wow..." is his wide-eyed groove-skipping verbalization early into his first robbery. The pink pair of pumps he gets out of the deal does apparently little to help him rectify his teenage gender confusion issues, but eventually he just has to give them back anyway.

Indeed, even in final apology, which is perhaps even sincere, the girls come off as contemporary empty selves. If mom (played by the indomitable Leslie Mann), with her ineffectual home schooling fueled by "The Secret," believes any of the espoused remorse, she might be the only one. But then again, this courtroom media attention equals fame, and that alone equals a happy ending for the members of the Bling Ring.

Likewise, viewers hungry for an uneasy and filmicly mysterious glimpse into modern entitlement, fame imprinting, and Paris Hilton's actual house - i.e., a subtly confrontational work with both ideas and a sharp sense of self right down to its very genetics - will be happy to let The Bring Ring enter their residence.