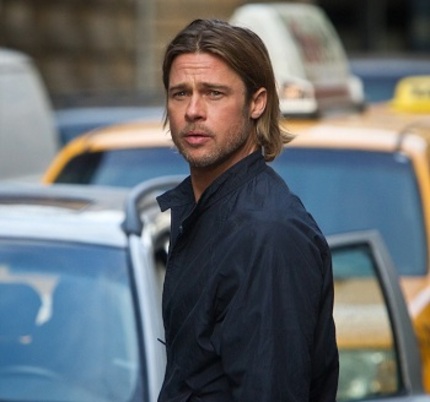 Will the problems never end for World War Z? The Wrap is reporting that they have been told exclusively by a Paramount Executive that they will be re-cutting their $175 million Brad Pitt vehicle to avoid offending Chinese audiences.
In Marc Forster's adaptation of the cult novel by Max Brooks, China is cited as the source of a zombie outbreak that subsequently consumes the entire planet. This is clearly a throwback to 2003's SARS epidemic and subsequent bird & pig flu scares that have shaken the region, and as a result makes sense as a believable epicentre within the context of the story.
However, with China now the fastest growing film-going market in the world, and set to overtake the USA and clinch the number one spot within the next decade, studios are doing whatever they can to help their films succeed there. As a result, executives are reportedly taking the preemptive measure of relocating the source of the film's outbreak away from China.
That a local market might demand cuts before exhibiting a film is hardly news, but China is proving a special case. With no published censorship guide, filmmakers are at the mercy of China's censorship body, SARFT, and each film can be cut or refused a release for almost any reason they choose. We have also seen a number of big budget Hollywood productions, co-funded by Chinese money, developing separate versions of their films for the China market. Shane Black's Iron Man 3 and Rian Johnson's Looper are just two examples of this growing phenomenon.
What Paramount is apparently doing with World War Z, however, is more worrying still. By attempting to preempt SARFT (there is no guarantee this strategy will work) and remove any potentially offensive material ahead of release, China is essentially imposing its own censorship on everyone. It may well be deemed the most cost-effective strategy going forward for studios to make their films China-friendly and have that be the default version for the whole world. After all, it is already looking mighty confusing out there in the marketplace with so many different cuts of each film floating around. It will be much simpler for audiences, studios and censors if there is only one version of any particular film available. And with China generating US$2.7 billion in box office revenue last year alone, that's a pretty strong argument to blame Thailand for the zombie apocalypse instead.
Sign-In to Vote
Tweet 0 Submit

Let me guess... Instead it'll be Japan.

With the changes made with Red Dawn, my bets on North Korea too.
But seriously though, this situation is pretty messed up. Like wasn't it only 2 years ago we had a movie called Contagion that basically had the same thing going for China, so why does this movie get the red-light?

Because that one was reference to the sars outbreak. world war z seems to implicate that the chinese genetically engineer a virus which makes humans into ruthless monsters. completely different

While I agree North Korea is the obvious choice as "Enemy No.1", from a narrative point of view it's not so easy to show an epidemic spreading quickly from there, due to its closed borders. Sure, we might see zombies charging over the borders into South Korea, but it might be easier to have it originate somewhere with open borders where it can spread globally much faster. (But I haven't read the book so don't know how it's meant to have been started).

Hold on if they blame North Korea will they retaliate and launch their slingshot nuke(s)?

World War Z is already so compromised, I am not particularly concerned by news of this cut.
Seems extra appropriate for this movie considering it's production.

The zombies would have a much easier time crossing into China than South Korea, realistically. The boarder between North and South Korea is the most heavily militarized and guarded in the world.

They should just go back to vilifying Russia again.

any asian looking enemy will do.

Sad, really. Guess we know who's in charge.