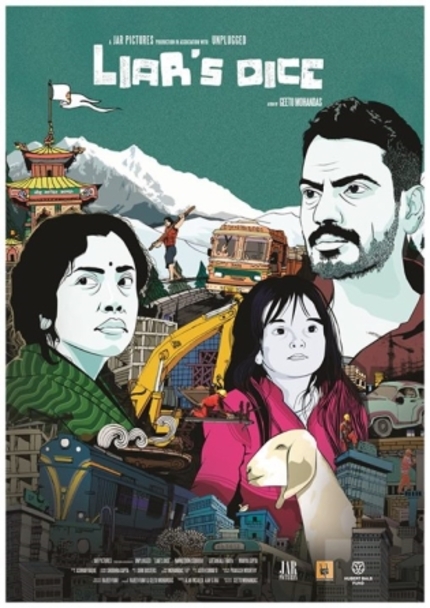 Indian independent cinema has been on the rise for the last couple of years. A rapid increase in visibility and growing interest in the biggest film industry in the world have fed this sudden surge in homespun tales of life in one of the world's most booming economies. This new wave of serious minded filmmakers and performers has more than its fair share of heroes, but perhaps none as ubiquitous as the sudden star of the silver screen, Nawazuddin Siddiqui.

It's difficult to talk about Geetu Mohan Das's debut feature, Liar's Dice, without approaching the film from a Nawaz-centric perspective. This film, a tale of a woman on a desperate hunt to find the husband who left to find work in the big city, is not unusual. There are a number of recent eerily similar Indian exports, and Liar's Dice manages to be the most opaque of them all. The hunt for lost family members is such a familiar trope these days, it's difficult not to take any new attempt as satire. With films such as Sujoy Ghosh's Kahaani (the tale of a pregnant woman searching for her lost husband in Kolkata), Richie Mehta's Siddharth (the story of a father looking for his possibly kidnapped son), and Anurag Kashyap's Ugly (the story of everyone and their mother looking for a missing girl in what appears to be a cesspool of corruption), Liar's Dice joins a group of similarly themed films grasping for Western attention.

Finding ways to differentiate this film from that spate is somewhat difficult. Liar's Dice separates itself by focusing on the disparate cultures of rural and urban India, in this case from wife Kamla's home in Chitkul in far Northern India to the bustle and corruption of Delhi. Kamla, after five months without a word from her husband, decides to take her daughter, Manya, on the journey to find out what has happened. Along the way they meet an army deserter named Nawazuddin (Siddiqui), who acts as their guide/protector/tormentor in the search. Kamla and Nawazuddin share an unspoken understanding of the futility of their hunt, but as long as Kamla pays, Nawaz plays and the journey takes many unexpected turns on route to its inevitable climax.

One of the most glaring characteristics of new Indian independent cinema is its 180 degree about-face from Bollywood convention. Where Bollywood sings and dances, this new cinema sits and stares, and nowhere is that bombast more subdued than Liar's Dice. With a spare but haunting score from newcomer John Bosters, the film plays with such subtlety that it very nearly lulls the viewer away from what's going on. However, you can leave it to Siddiqui to turn up the heat at just the right moments.

Nawazuddin Siddiqui has appeared in something like twenty films over the past three years. Everything from rejected Oscar hopeful The Lunchbox and avant-garde horror/docudrama Miss Lovely to 2012 Bollywood blockbuster Talaash has received the blessings of Nawaz's unique skill set. As I mentioned in my 2012 top ten Indian films list, "no one plays tortured souls like Nawaz, and if he's in a movie, chances are that there is a lot to recommend." It's his performance as the slowly melting freeloader-turned-guardian-turned-something else entirely that will keep audiences rapt. His co-star, Gheetanjali Thapa (Monsoon Shootout, also starring Nawazuddin Siddiqui) as the lovelorn and abandoned Kamla plays weepy quite well, but her range is not exactly tested in this film, whereas Siddiqui swings back and forth from charismatic conman to steely-eyed protector with an ease not often seen.

It's tough to wholeheartedly recommend a film like Liar's Dice without qualification. The film is contemplative, at times to point of disinterest; however it treats its audience with more respect than most filmmakers dare. If you're looking for a fun night out at the movies with your significant other, I might suggest avoiding this film. However, if you're looking for a film that assumes you're willing to work a little bit for your own satisfaction, Liar's Dice might just be the ticket. Strong central performances, gorgeous cinematography showcasing the rarely exhibited Himalayan region of India, and a conclusion that leaves the viewer to his own devices means that Liar's Dice is a perfect film for a festival like Sundance. While it's unlikely to find commercial success, it might just find its audience among the intellectual crowd, who'll surely dissect its meaning with little care to the cultural context from which a film like this has sprung. Needless to say, it deserves more care.