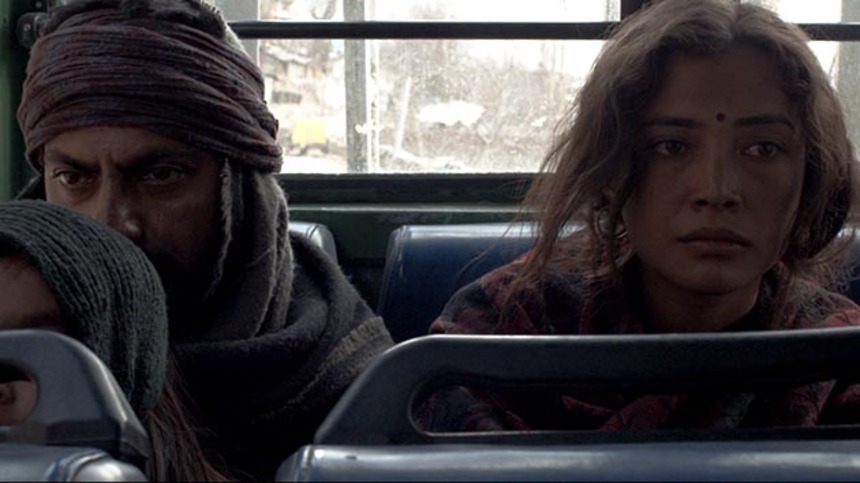 It is just the tiniest taste, but this teaser trailer for the Sundance World Dramatic Competition film Liar's Dice has whet our appetite for more. Directed by Geetu Mohandas, this tale of an Indian woman venturing to find her husband looks to have production value in spades from the snowy Himalaya to the bustling metropolis of Delhi. Here's a bit more about the film:

It's been five months since Kamala has heard from her husband, Harud, a construction worker at a dangerous and potentially corrupt urban worksite. Though others in their rural, snowbound village in Himachal Pradesh, India, know of men who started new families in the city and never returned, they urge Kamala to stay put and await his word. She refuses, stubbornly taking her young daughter, Manya, and her pet goat on a poorly conceived journey--to the regional capital, Shimla, and eventually Delhi--looking for her husband. Along the way, they encounter the mysterious Nawazuddin, who acts as a reluctant guide and protector to the pair for his own unclear motives.

Incorporating elements of road movies and slow-burn thrillers, established Indian actress Geetu Mohandas's atmospheric, feature directorial debut examines the ominous undercurrents in contemporary working-class India, allowing the locations themselves to play a key role in the story. Ambiguity abounds in the mother and the stranger's shifting intentions toward each other as Geetanjali Thapa and Nawazuddin Siddiqui's committed performances deepen the film's exploration of the various forms resilience can take.

Check out the trailer below and look for more on Liar's Dice and plenty more from Sundance when the festival kicks off tomorrow.