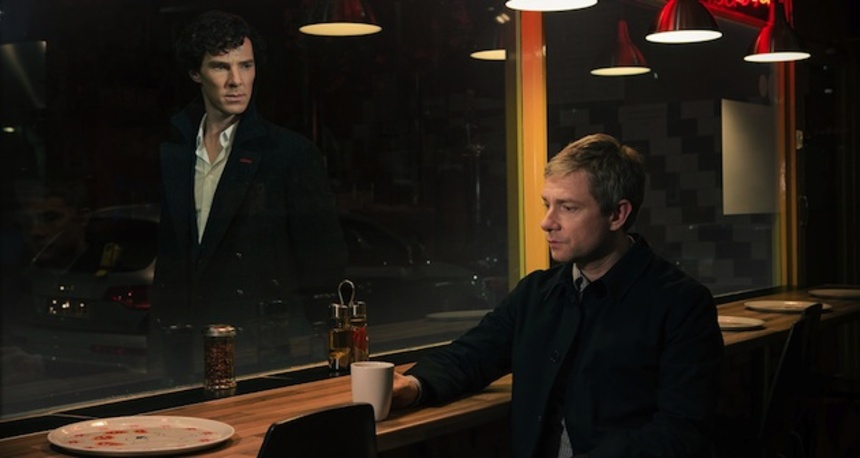 Early in "The Empty Hearse," the generally outstanding third-season premiere of the BBC's Sherlock series, John Watson (Martin Freeman) must explain at length to Mrs. Hudson (Una Stubbs, who has the best name on television) that he and the "late" Sherlock Holmes were not, in fact, lovers. "The Empty Hearse" is delightfully loaded-to-overflowing with metatextual jabs at the pop cultural conversation around Sherlock, and the nudge-nudge-wink-wink nature of Sherlock and John's all-boy living conditions was not, of course, immune.

(Read Todd's full review of "The Empty Hearse" here, and if you're just catching up with the series in its domestic run here in North America, beware of minor spoilers for Season Three below.)

Along the lines of sexuality on Sherlock, "The Empty Hearse" ran the gamut. It acknowledged - while refuting - the popular subtextual possibility that Sherlock and John are gay; it sent a thousand slash fiction pens a'scribbling with a fantasy sequence in which Sherlock and Moriarty start to make out; and it gave equal screen time to Sherlock's assured status as a thumping-red heterosexual fantasy date, when the lithe superdetective crashes through a window, musses his hair, and plants a big one on long-pining Molly in a single, deft motion.

The episode was exciting as hell, and the comprehensive conversation it had with the series' exterior mythology was the biggest part of the fun. But, of course, Sherlock and John aren't gay lovers. That would make a fascinating storytelling exercise within a Sherlock Holmes interpretation on its own terms, but in this case, it would also negate the fantastic cultural power that this Sherlock, particularly, has been accumulating - which is at least in part thanks to the fact that Sherlock and John are normal(ish), heterosexual men... who love each other.

I have a friend who goes titicaca every time a heterosexual male around her mentions even a passing interest in, or fondness for, babies. She's a lunatic, but I've always found the reaction abjectly fascinating. She's told me that seeing any man step outside his emotive gender norms, particularly expressing what we might typically call "maternal" feelings (although I'd argue they're just as much paternal feelings, in a world where parents are allowed to love their children equally), throws her into an emotional overload, because it's so rare.

It's sentiments like this that make me think quite a lot about bromance vs. our cultural conceptions of masculinity. Naturally, being a Sherlock fiend too, I think about Sherlock and John's bromance in particular quite a bit.

In a sense, there's nothing in Sherlock that exceeds the boundaries of any of twelve dozen buddy cop movies and TV series over the past fifty years. Sherlock and John initially don't like each other, because Sherlock is crazy (he's the Riggs), and John (who's too old for this shit) likes to protest in favour of standards of normal behaviour. "Odd," meet "Couple."

Sherlock and John's animosity immediately proves to be poppycock, of course, and not just because John is secretly a risk addict and Sherlock is secretly a human being, and working together therefore really solves a lot of their mutual problems. They like each other, is the immediate point, even if it takes them a year or so to get round to somewhat acknowledging it.

They also need each other, which deepens the onscreen chemistry beyond mere partnership or friendship and into a very serious form of co-dependence and love. John is plainly Sherlock's human credential, the single visible piece of evidence that Holmes is not, in fact, an irredeemable, reprehensible clod. (Even Sherlock figures this out at some point, as he incorporates a reference to it into his speech at John's wedding.)

But I like to think that Sherlock is John's human credential as well, in a less obvious way. John is so categorically repressed on an emotional level that Sherlock must legitimately conjure an apocalyptic bomb scare (in "The Empty Hearse") just to get John to admit that he likes him and is glad he's not dead. Whenever John's stiff-twittishness gets in the way of his ability to live a fully-realized human life - never more so than over the course of Sherlock's "death" and return, between the second season and the third - it's Sherlock who provides the (often exceptionally churlish) kick in the ass to get John's emotional mojo flowing again.

And this is why I think the Sherlock bromance has sounded such a staggering chord among the show's fan base. Here are two adult heterosexual men who are, in various ways, doing their absolute utmost to not deal with one another on an emotional level at all, who are simultaneously playing out one of the most completely emotionally supportive relationships on television. And because it's two highly emotionally-resistant males playing out the relationship in question, I think the Sherlock bromance shows up just how rare that sort of relationship actually is in popular culture.

Men and women (or men and men) (or women and women) relating romantically, or potentially romantically, has an ancient series of emotional codes and behaviours that we can access and understand with little effort. We all know a love story. That sort of relationship is everywhere, even where you don't want it (Mulder and Scully, anyone?).

Women are easily coded in media (and everywhere else) as the emotionally available and supportive half of the gender balance, so as long as a series or movie is willing to leapfrog over the Bechdel test long enough to let women have a relationship with one another, those kinds of friendships aren't too outside the norm, either.

Male friendships, though, seem to exist in a perpetual, hands-off assertion of emotional dudeness. Returning to the buddy cop model, that trope works because the men are a) professionally linked, which legitimizes the pairing for objective/non-emotional reasons, and b) able to wiseass their way past every other emotional element, from dislike to abiding love. (Wiseassery is a great shield against the emotional overshare, as I or any other male in my circle of friends will frequently demonstrate by responding to anything resembling a heartfelt compliment with a smartass joke.)

Or, on the more passively homophobic side of things, there's the whole presumption/subtext/joke that Sherlock and John are gay in the first place - because it's easier to assume (or joke) that there are sexual motives involved in their relationship than to think that they might, entirely asexually, have a deep and meaningful love for one another.

We are not, generally speaking, a culture that very much likes the idea of men as emotional creatures; or at least, not the "soft" emotions like love and affection. (Anger, jealousy, anything dominating or prepossessing? Sure. See The Wolf of Wall Street.) And yet when all the alphas have gone off to do whatever it is alphas do at night, I'd argue that there's still a gigantic audience of men and women who want and need to see emotional connections among men, played out in a language that makes sense to them.

And Sherlock and John are so good at it. They utterly adore one other without ever having to say that they do; they complete each other far more than Tom Cruise and Renee Zellweger ever did. If they ever get around to an explicit statement of their feelings about one another (as, again, in Sherlock's lengthy, devastating wedding speech for John), one can scarcely get to the internet fast enough to write "FEELS!" in block capital letters over every gif on Tumblr.

Indeed, the word "FEELS!," superimposed over two heterosexual men whose connection is unabashedly platonic, yet unabashedly heartfelt, is my point. It remains so rare in the zeitgeist that it calls capital-letter attention to itself, all on its own. Surely, then, we need more Sherlocks and Johns.