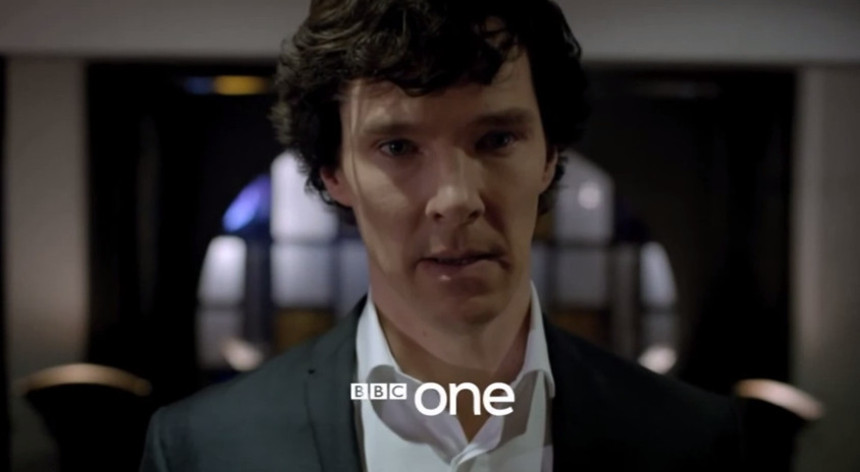 Two years on from plunging to his apparent death before the horrified eyes of his closest - and very nearly only - friend and compatriot John Watson the great Sherlock Holmes makes his return with BBC fave Sherlock hitting the airwaves in the UK last night with the debut of its third series. And, yes, it was very much worth the wait.

Having spent the interval between seasons traveling the globe rooting out the last vestiges of James Moriarty's criminal network in the employ of elder brother Mycroft - meaning, yes, there were others involved in the staging of Holmes' demise and Watson was very intentionally left out of the loop - Sherlock is summoned home at last to look into a mysterious terrorist organization planning an attack on London. Which should mean a joyous reunion with his former partner Watson except Watson isn't feeling very joyous at all.

Watson, you see, has been struggling to put himself back together after witnessing the 'death' of his friend. He's gone back to a mundane life as a practicing doctor, moved out of the duo's Baker Street apartment with nary a word to their loyal landlady and grown a mustache. Yes, where some people mark major trauma by cutting their hair Watson has chosen to instead grow some on his face. He's also chosen to get married, his relationship with his receptionist Mary Morstan (Amanda Abbington) seemingly the only bright spot in his post Holmes life. And when Watson realizes he has been left cruelly - and unnecessarily - uninformed about the truth behind Holmes' disappearance for two long years he is less than pleased.

Sherlock is one of those brilliant pieces of on screen alchemy, one of those rare moments when an ideal writer (Mark Gatiss) is matched with both ideal content and a perfectly suited cast. Yes, there is sleuthing going on here and we're teased out the very beginnings of what is obviously a much larger story yet to come the real joy is in seeing Martin Freeman and Benedict Cumberbatch slip back into the roles and relationships that fit both like a second skin. Gatiss and co-creator Steven Moffat trust in their audience enough to pick things up where they left off with minimal recap and trust their characters enough to have let them grow and develop in the interval. The support players remain remarkably textured - with Mary being a strong addition - but this is really one hundred percent about the interplay between Holmes and Watson.

Cumberbatch's Holmes remains a sort of benign sociopath, a brilliant man almost entirely devoid of any sort of human empathy and yet fascinated by the people whose behavior he can dissect with astounding accuracy with the fascination perhaps stemming from the fact that he relates to so little of the motivation behind those behaviors. Sherlock himself is the brains of the outfit and the flashy hook that draws attention to the show and Cumberbatch remains as strong as ever in the part but it's Martin Freeman as John Watson who supplies all the soul and is the real key to its lasting success and popularity. Watson provides the humanity that Holmes lacks and Freeman's performance as a man still struggling to cope with a loss that he can barely express years after the fact, only to discover that the loss itself - and the years of subsequent pain - were all an elaborate fraud is as elegant and nuanced a piece of work as you're likely to see on screen all year.

Where this return episode stumbles - and thankfully it's a minor stumble and one that shouldn't repeat as the series progresses - is in its mucking about with the whole 'how did he do it' issue. The why's are made clear - as they should be - but, like a great stage magician, Holmes has no particular interest in explaining how he pulled the trick off and so that question is left to minor characters to hypothesize on in a clear bit of pandering to the show's cult fanbase. Well, the reason that the show has that fanbase in the first place is that it generally doesn't pander and the attempt to do so here is clumsy and silly and tonally completely out of place with the rest of the show. Happily it's also relatively brief.

In Fear helmer Jeremy Lovering turns in very solid work - Outcast's Colm McCarthy and Undertaking Betty director Nick Hurran take over for the remaining episodes of the season - neatly balancing out the character and plot notes for what, on the whole, is an excellent return of a highly anticipated favorite.

Do you feel this content is inappropriate or infringes upon your rights? Click here to report it, or see our DMCA policy.
benedict cumberbatchempty hearsemartin freemanreviewsherlock