Destroy All Monsters: Thinking Better Of The Wolves

I still don't know exactly where to come down on The Wolf of Wall Street. In the first part I don't think it's a particularly great movie, though of course being a Martin Scorsese picture, it's a hell of a lot better than most.

Is it just warmed-over Goodfellas (or rather, warmed-over Casino, which was warmed-over Goodfellas)? I don't know, but Wolf does feel repetitive. The scenes are new (the extended sequence of a Quaalude-paralyzed Jordan trying to get into his Lamborghini like an angry puppet with its puppeteer on a smoke break is among the funniest things I've seen all year), but the rhythm is the same.

We could deduct a lot, I suppose, from the fact that in the Scorsese canon, the wolves of Wall Street have replaced gangsters in his rogues' gallery; Wolf even underlines the point by having Jordan, in the first 10 or 15 minutes, ape Ray Liotta's memorable line from the opening of Goodfellas by saying "All my life, I always wanted to be rich." That's the crux of the thing, isn't it -- all the gangsters ever wanted, and all Jordan and his idiot friends want too. They're looking for the shortcut around, to an unimaginably decadent lifestyle.

Plus, of course, the omnipresent license to be a dick, which maybe is more to the point anyway. Money might be the goal, but the lifestyle is about not having to give a fuck. Per the predictable rise-and-fall metrics of this sort of movie, they do indeed get there; and then it all goes to hell.

Wolf is decadent in its efforts. It's a three-hour movie that drips by at a snail's pace because its denizens' shenanigans, while spirited and inventive at times, are telegraphed from frame one. The most interesting (or at least unusual) thing about Wolf, from a Scorsese perspective, is the sheer quantity of sex.

Scorsese has traditionally adopted a less-is-more approach to onscreen sexual excess, and a no-fucking-way approach to actual, emotion-driven love scenes. Here, though, he opens an early sequence with a confusing shot of a pair of flesh-coloured globes which, after a moment or two, resolve into the twin ass cheeks of a hooker in the "face down, ass up" position, while Jordan either does lines of coke out of her asshole, or drinks from her vagina with a straw, or something. I don't remember. Honestly, it was a lot of sex.

It got a bit muddled in my head after a while, having been force-fed a ceaseless three-hour parade of the 1990s gold standard of Playboy-quality tits, ass, and, more often than not, freshly-waxed pussy. Jordan and his father's one true heart-to-heart in the film concerns, in part, the relative merits of a bald pubis vs. the pleasures of good old-fashioned pubic hair.

The film might even be aware of it, too: when Jordan's right-hand man and all-around jerk-off Donnie Azoff (Jonah Hill) first lays eyes on Jordan's spectacular soon-to-be second wife (Margot Robbie), he literally pulls his prick out of his pants and starts beating off right in front of her. He's stoned at the time, but the movie doesn't split hairs on this; everyone's stoned all the time. Hill's floppy rubber dickie (Hill has had a big year with rubber dicks) is a stand-in for the hot-wired sexual urges of the whole audience's worth of voyeurs. Just wait till you get this on Netflix, fellas. 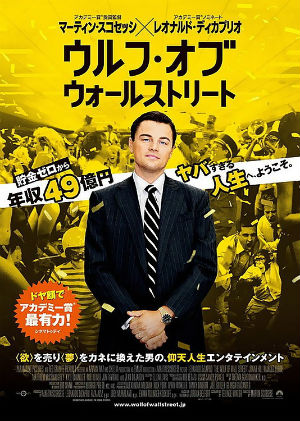 The question of the movie's thematic intent has been raised repeatedly since its release, and rightly so; there are a lot of real-world tangents and consequences that the movie involves (for example, the metric ton of money the real Jordan Belfort is going to make as a direct, and indirect, result of this exposure).

Say we are to give Scorsese and DiCaprio the benefit of the doubt, and assume that they created The Wolf of Wall Street as a full-on critique of every single element of a person like Jordan Belfort and the society that created him. The film is not without its protracted portion of comeuppance, as I've said, though even here, the real-life consequences of Jordan's actions are shown to be so frivolous that they're little more than a hearty indictment of just how insane the United States' treatment of its financial criminals has been, and remains. Fair point.

So let's continue to presume the best of intentions from the filmmakers, who wanted to use Belfort's story to expose and critique the toxic masculinity and systemic malfeasance that creates Jordan Belforts and then lets them retire on self-help book revenue. Here, at least, the sexual excess makes a kind of relevant thematic point, Wolf's women turned into literal pornography in lieu of being seen or treated as actual humans by any of the film's characters (or filmmakers).

Some critics have even praised Wolf's unwillingness to level a moral gaze upon Jordan and his gang, but I fear the Scarface problem here. Playing to a white liberal middle-class audience, The Wolf of Wall Street might indeed be read as satire. Playing to an audience who has no idea it's satire and wouldn't give much of a fuck if they did, Wolf, like Scarface, like Goodfellas, like the other Wall Street, is a 3-hour infomercial for 1-888-CRIME-PAYS.

The problem with issuing a send-up of toxic masculinity is how quickly and completely it can be interpreted as the inverse by the very toxic males it is describing. As such, The Wolf of Wall Street is just another alpha male propaganda piece in a pop culture that is heartily over-saturated with them. (Again: we already have Michael Bay. Who at least had the unhypocritical clarity of mind to call his film Pain and Gain.)

Even the "disasters" that befall Jordan Belfort on his way down seem more like the gags from a Farrelly Brothers movie than actual rejoinders to his hellish lifestyle. I already called the Quaalude car scene one of the funniest of the year; but there's also the Grand Guignol sinking of Jordan's yacht, or Donnie pissing on various subpoenas and kicking the urine bucket at his employees, or any number of other enviable "rich people problems" right down to, and including, Jordan's 22-month prison sentence in a minimum-security facility, where - horrors! - he has to play tennis.

These scenes are also, notably, the only two times that a woman, even temporarily, gets the better of our proud piece of walking testosterone. And they don't last long.

A fellow critic recently described one of the merits of 12 Years a Slave as its having been "responsibly directed." That thought has been on my mind of late. There's an outer ring of artistic responsibility that a movie like The Wolf of Wall Street ignores, which is to consider, while not bowing to, the ways in which the work might or might not be interpreted.

For all its drudgery, the word that best describes Wolf's approach to its debauchery is "gleeful." Perhaps the filmmakers really did approach the story with a "holy crap, look what this guy did!" mentality and let the chips fall where they may, but in the era in which the film has been released, with many of its criminals paying no real price for their crimes, and with the shadow of a much harsher economic reality dividing the United States into two vastly unequal halves, The Wolf of Wall Street seems crass, unconsidered, and brutish. Just like Jordan himself.

Do you feel this content is inappropriate or infringes upon your rights? Click here to report it, or see our DMCA policy.
Leonardo DiCaprioMartin ScorseseThe Wolf of Wall Streettoxic masculinity