New-School SHERLOCK Gets An Old-School Special. Take A Look At The First Scene! 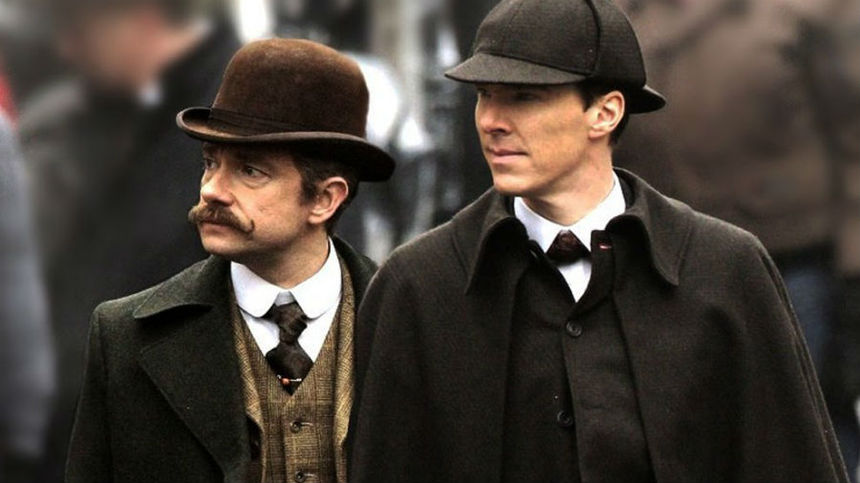 It's tough times at the BBC these days, with major budget cuts leading to a thousand person layoff and rumblings of more changes in the works. And so, perhaps in the name of generating some positive attention for a change, the venerable broadcaster has trotted out the first footage to be seen from the upcoming Christmas special of their hugely popular Sherlock.

Benedict Cumberbatch and Martin Freeman return as Sherlock Holmes and Doctor Watson, of course, but things get somewhat strange beyond that. Much of Sherlock's success has been built on the creative team's ability to take the classic characters and transpose them to a modern day setting. This is not your mom and dad's Sherlock, basically, though mom and dad seem to have flocked to it every bit as much as their kids, prompting huge viewership numbers. But now - for this one special, at least - it IS your mom and dad's Sherlock, with the setting moved back to Victorian times meaning this incarnation of Holmes now looks pretty much exactly like every other incarnation of Holmes ever. I'd be surprised if not for the fact that last season's writing made it pretty clear that nobody had much of an idea what to do with the character in the modern day once Moriarty was disposed of.

But enough of the griping ... the curiosity factor is going to lead to massive numbers for this one as well and should you feel a touch curious yourself you can find a full scene from the special below.

Do you feel this content is inappropriate or infringes upon your rights? Click here to report it, or see our DMCA policy.
bbcbenedict cumberbatchchristmas specialmartin freemansherlocktrailer