TV Beat: GETTING ON, HBO's Newest Brit Adaptation, Strains Too Hard For Humor 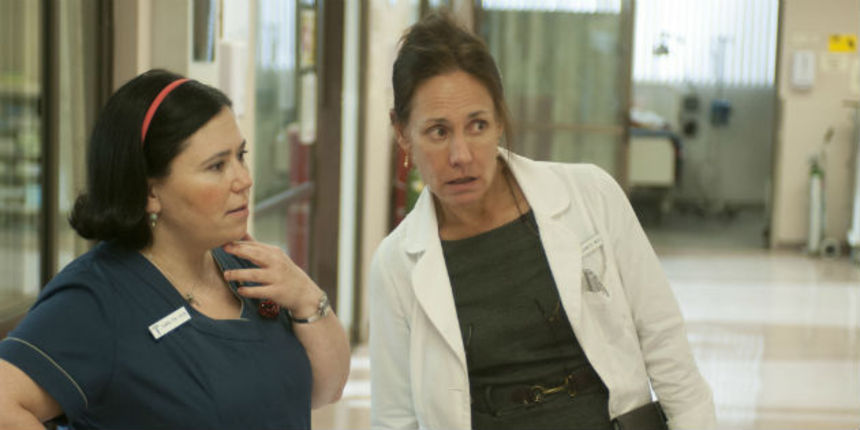 Right up front, Getting On, HBO's adaptation of the BBC series of the same name, establishes itself as something in which I have little to no interest. Poop humor is not my thing, and resurrecting calcified jokes about people speaking a language other than English -- in modern-day southern California, no less -- is simply not funny, putting aside any thoughts of political correctness.

The show is set in the extended care unit of a hospital in Long Beach, California, a facility that is under fire for not providing the level of service required. Much of the first episode revolves around Nurse Dawn (Alex Borstein), who is breaking in the experienced Nurse DiDi (Niecy Nash) on her first day in the unit. Dawn is under fire herself, her future employment in question due to rules violations, and appears to be caught between pleasing Dr. Jenna James (Laurie Metcalf), temporarily in charge of the unit, and Beverly, a no-nonsense supervising nurse (Telma Hopkins). The patients in the female-only unit are largely ignored and/or treated as revenue streams.

The American version was developed by Mark V. Olsen and Will Scheffer, who created HBO's Big Love, a show that strained quite hard for dramatic insights and, fairly quickly, drove me quite bonkers, despite the often-impressive performances. Laurie Metcalf will apparently have a larger role in the remaining five episodes of the first season of Getting On, which might reward viewers who are more patient and/or more in tune with the kind of humor on offer here.

HBO has made the first episode available for viewing on YouTube. Visit the official site for more information.

TV Beat is a column on shows designed for small screens.