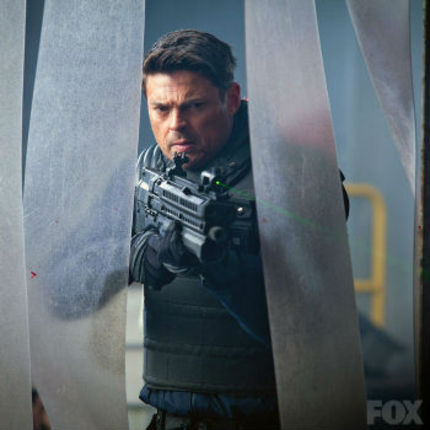 Whenever I watch a TV show set in the future, I split into two people. One is the kid who was drawn to science fiction in his early teens, dreaming about Big Ideas played out in far distant galaxies and alternative realities. The other is the middle-aged man who knows the difference between true speculative fiction and modern-day dramas dressed up with space-age visual effects.

On the scant basis of its pilot episode, Almost Human is a cop drama, wrapped in a blanket of computer-generated geegaws. Remove the visual effects, and it has the potential to develop into a traditional character study of a cop stuck in the past, one who doesn't deal well with changes. It's a story that's older than the movies, yet it resonates in every new generation, which is why the show contains the seeds it needs to blossom into something more than a police procedural, especially with Karl Urban in the lead.

As written by series creator J.H. Wyman (Fringe), John Kennex doesn't trust the future in which he's grown up. It's 2048, so the character would have been born about ... now ... but Kennex is a throw-back to cops of the 1950s, that golden era when criminal suspects could be viciously beaten while in custody so as to elicit a confession, without fear of official reprisal. He resists the robot cops that have been developed to assist a police force that is outmanned by more powerful criminal syndicates, preferring to work with a human partner.

The inciting incident is a case where Kennex's partner is mortally wounded, and a police robot leaves him for dead. Like any good human, Kennex refuses to leave his friend behind, and suffers the loss of his leg and two years in a coma as a result. He returns to service under the command of his superior, Maldonado (the always-welcome Lili Taylor), despite medical reports that indicate he is in no way fit for service (shades of Skyfall). He ends up partnered with an older model of robot, known as Dorian (Michael Ealy). 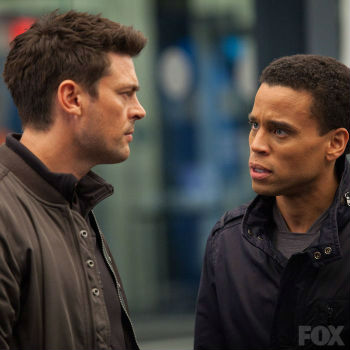 While the newest generation has been made entirely logic-based and rule-oriented, Dorian is from a line of machines that can draw conclusions from data, and also sympathize with human feelings. Dorian tells Kennex, "I was made to feel," and then proceeds to demonstrate his superiority to the latest models through deductive reasoning and empathetic actions. "Sometimes newer technology isn't better," he tells the surprised Kennex.

The series could just have easily been set in the 1970s, without the faux-robotic tech, but featuring the same central conflict. That's not entirely a knock, however, but a recognition that the show is not even close to ground-breaking. For all the clever visual touches, this is a future in which the hair styles, fashion, and standards of beauty are all the same as they are today; as is so often the case, the vagaries of human behavior are assumed to remain the same, 35 years in the future, as they are today.

Of course, this was just the opening salvo, and it's far too early to dismiss it out of hand. Urban is a charismatic presence, and he fills the brute, tough-guy role easily. Almost Human is set up as a buddy-cop show, and Ealy's range is limited by the premise, so it will be up to Urban to modulate his performance, which he's fully capable of doing. No one else in the cast, including Minka Kelly, makes any impression in the pilot episode.

Almost Human has yet to prove that it deserves to be called speculative fiction, but as a sci-fi cop show, it functions perfectly well as a cog in the assembly line of the network's lineup.

The show is broadcast on Fox in the U.S. It moves to its regular time slot tonight, Mondays at 8:00 p.m., 7:00 p.m. Central. Visit the official site for more information.

TV Beat is a column on current shows and developments in the small-screen industry.

Do you feel this content is inappropriate or infringes upon your rights? Click here to report it, or see our DMCA policy.
almost humanKarl UrbanMichael Ealyscience fictionTV