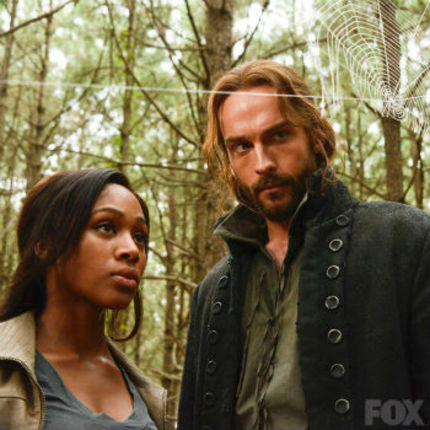 A headless horseman gallops out of a nightmare and into the modern day in Sleepy Hollow, a new series that returned to broadcast television last week with an even more apocalyptic vision.

In Washington Irving's short story "The Legend of Sleepy Hollow," first published in 1820, the secluded, upstate New York setting is known for its haunted atmosphere (according to Wikipedia), and the tale ends with "superstitious schoolmaster" Ichabod Crane ("a Yankee and an outsider"), who pines for the young Katrina Van Tassel, disappearing after a terrifying encounter with a headless horseman.

Sleepy Hollow refashions Crane into a British soldier during the Revolutionary War who defects to the side of the American patriots. During a fierce battle, he cuts the head off a mounted soldier before being felled himself. Blood from the two soldiers mixes on the battle ground, but both rise up again in the 21st century, Crane because his beloved and witchy Katrina cast a spell upon him, and the headless horseman because he's one of the biblical Four Horseman of the Apocalypse.

Last week's episode, "The Sin Eater," is a good jumping-on point. It's the sixth of 13 for the first season, and the first after a month-long break occasioned by Fox's commitment to sports. It catches up on most of the major plot points of the first five episodes, while setting things up for the balance of the season. For those who've been following the show, Crane's back story is fleshed out nicely.

The key relationship is between Crane (Tom Mison) and Lt. Abbey Mills (Nicole Beharie). Mison is new to me; he commands attention as a stranger in a strange land. Crane is not a born detective, yet he's intelligent and adaptable to his new circumstances. He keeps his confusion to himself, perhaps out of an instinctual desire not to appear overly foolish, which in itself is a welcome touch. That's balanced with a willingness to try new things that are out of his comfort zone, as exhibited in the episode when he and Abbey attend a baseball game. 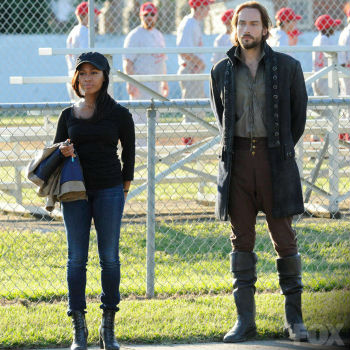 Beharie made a strong impression in Steve McQueen's Shame opposite Michael Fassbender, and she has shown herself capable of a wide range so far. At the beginning of the series, she had developed her law-enforcement skills under the mentorship of Sheriff Corbin (Clancy Brown) to the point where she'd been accepted to the FBI academy The sheriff leaves the picture, Abbey remains in town, and her past is exposed, including her estrangement from her sister Jenny (Lyndie Greenwood).

Crane and Abbey have moved quickly from mistrust to friendly banter to something deeper than a working relationship, which plays as a good counterpoint to the supernatural creatures and apocalyptic agonies that form the setting for their criminal investigations. Already the show is distinguishing itself from its influences, including The X-Files and Twin Peaks, and the addition of John Noble (Fringe) to the cast bodes well.

As well-detailed by Josef Adalian at Vulture, the show has an interesting pedigree, originating with an idea by Phillip Iscove, an assistant at a talent agency. He presented his idea to the production company run by Alex Kurtzman and Roberto Orci, blockbuster film specialists (Transformers, Star Trek) who are also television veterans, most recently known for Fringe. They brought on Len Wiseman (Underworld) to develop the idea into a series; Wiseman directed the pilot episode and set the spooky, action-packed tone.

The big task ahead is to to somehow balance all the disparate elements, including the humor and the horror, mix in new story ideas, and keep the momentum going. In its favor, the first season is limited to 13 episodes, which should ease the burden from a normal 22-episode run, and a second season has already been secured. The best-case scenario is that Sleepy Hollow continues to grow without feeling undue pressure to wrap everything up too quickly.

Sometimes, it's good to be open-ended, even if you don't have a head.

In the U.S., Sleepy Hollow airs on Fox, Monday nights at 9 p.m., 8 p.m. CST. Visit the official site for more information; U.S. visitors can also view full episodes there.. The show can also be watched via Hulu Plus.

TV Beat is a column about new shows and other developments on the small screen.

Do you feel this content is inappropriate or infringes upon your rights? Click here to report it, or see our DMCA policy.
Nicole BehaireSleepy HollowTelevisionTom Mison