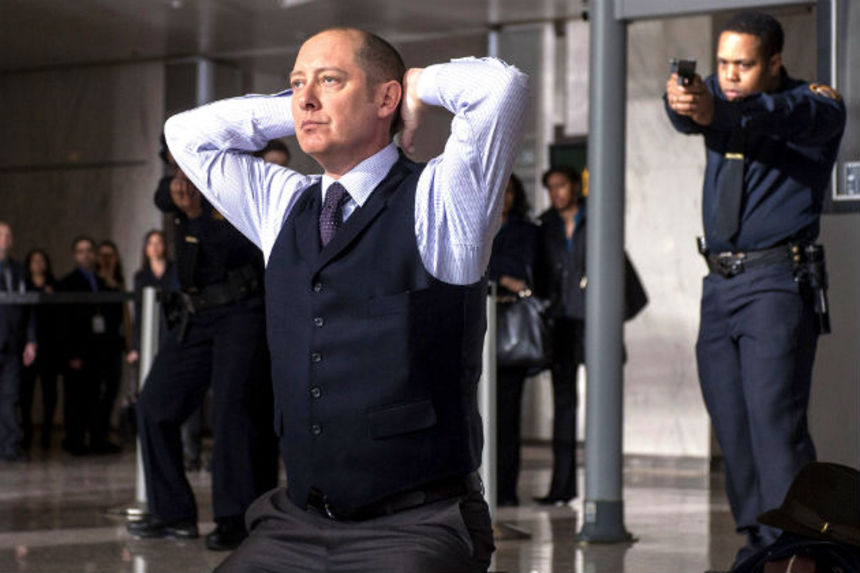 It was already a good show, one of the best new broadcast TV series of the year. And then Joe Carnahan blew up The Blacklist, directing and co-writing an episode that was bloodier, more urgent, and more painful than anything that had come before.

James Spader, who emerged in the mid-80s as a young, slick, oily, yupppie-in-training (Tuff Turf, Pretty in Pink), is the anchor and main selling point of the series. The character he plays, Raymond "Red" Reddington, is a former government agent who turned traitor, becoming a middle man available to broker deals for and in behalf of international criminals and rogue governments alike, to whoever can pay the highest price. In the first episode, he turns himself in to the FBI, with the single proviso that he will only talk to a rookie agent named Elizabeth "Liz" Keen (Megan Boone).

Reddington has a "blacklist" of criminals that he wants to help the FBI catch. The FBI is naturally suspicious; Reddington has his own agenda, but, as long as he delivers "most-wanted" criminals, the U.S. government will play along. Every episode features a trio of FBI agents, led by supervising agent Harold Cooper (Harold Lennix), bland-but-highly trained field agent Donald Ressler (Diego Klattenhoff), and ill-defined agent Meera Malik (Parminder Nagra). Meanwhile, Liz's husband Tom (Ryan Eggold) occasionally looks suspicious but mostly scowls like a discontent 1960s housewife.

With Liz set up as the series protagonist, doing the hard work of explaining how and why Raymond is needed, Raymond himself is free to float in and out of scenes as the catalyst of each and every episode. Raymond puts on a good show, enjoying the luxury of the good life, ostensibly so he can keep up his "cover," but mainly to demonstrate his superior intellect. His modus operandi is constructed around his intimate knowledge of intelligence agencies and criminal operations; he knows both how to catch criminals and how to avoid being caught.

Spader excels in the role, which blends his past experience as a lead actor (most notably on the TV series Boston Legal) with his instinct for fleshing out the most compelling nuances in supporting characters. On the surface, Raymond oozes charm and lazy charisma, acquiescing as needed to the demands of his FBI handlers, yet he becomes a take-charge personality when that is demanded by the situation. 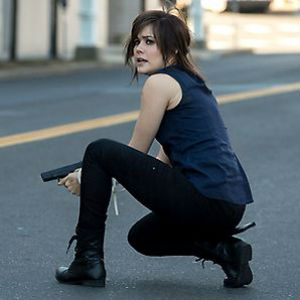 The driving force of the first nine episodes has been the question of Liz's paternity, with strong hints that Raymond is, in fact, her father, and that's why he insists on speaking only to her initially. It's a good hook, borrowed in spirit from The Silence of the Lambs, with Raymond a non-cannibalistic Anthony Hopkins and Liz a married Jodie Foster. Raymond has other motivations, though, which might include personal revenge (Episode 04, "The Stewmaker," involved the disposal of a serial killer played by Tom Noon) and possibly clarification on the real reasons why he stopped working as a government agent (the hints of turning traitor against the U.S. don't jibe with how he's conducted himself).

The hook and the sub-theme collided in last week's episode, "Anslo Garrick," in which the titular character leads a heavily-armed attack upon the secret FBI station that serves as a headquarters for the unit run by Harry Cooper. Raymond has been brought to the station in protective custody due to threat of an imminent death threat, but really it's been engineered by Garrick as part of his plan to kill Raymond.

I quickly lost track of the number of agents killed in the attack, but they were all faceless minions until the episode began winding up. (It's a two-part episode, with the conclusion, which also serves as the "fall finale," airing tonight.) Carnahan directs the action with berserk but controlled ferocity, massaging the bloody mayhem and body count to maximum effect. Carnahan directed the pilot episode, which was quite good and featured a similar breathless pace, yet here the stakes have been raised. 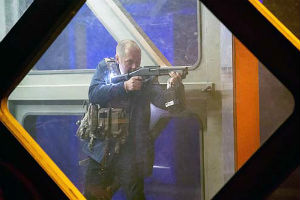 Agent Ressler has been blasted in the leg and is on the verge of bleeding out; Liz is grimy and dirty and has killed multiple bad guys in cold blood; Cooper and Malik have been captured; Cooper is following protocol and refuses to capitulate to the demands of Garrick, resulting in the death of at least one "innocent" so far. Raymond has locked Ressler and himself in a bulletproof windowed cage.

The ante has been raised because the relationship between Raymond and Liz has developed into something more than a criminal mentor of a law enforcement agent, or of a father and his long-lost daughter. Spader is the reason to watch the show, his intelligence and compassion pouring out of his veins, but Megan Boone is proving to be a more than competent partner, a woman who can doubt her husband and adore her adopted father and then go out and kill as many bad guys as needed.

With two strong characters, and plots that twist when I expect them to bend and bend when I'm positive they'll twist, The Blacklist has my full attention. The initial 13-episode run has been extended for an additional nine episodes, so I'm hoping the momentum and the ingenuity will not be flagging any time soon.

The Blacklist airs on NBC on Monday nights. Visit the official site for more information,

TV Beat is a column about television.