Review: IT'S ME, IT'S ME, A Surreal Farce On the Nature of Identity 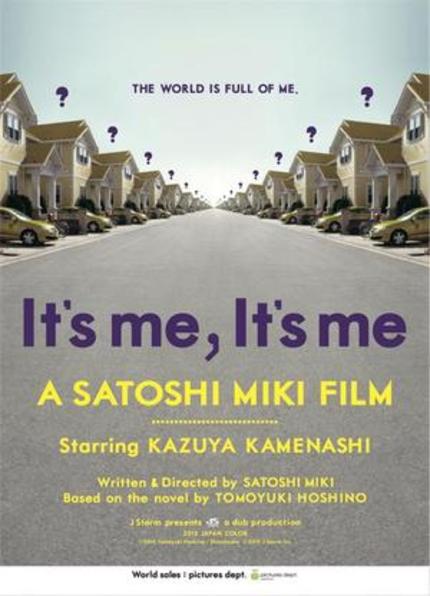 A comically surrealist farce on the nature of identity in the digital age, Miki Satoshi's latest film It's Me, It's Me features an impressively energetic and remarkably varied multiple performance by J-pop star Kamenashi Kazuya as the central character, or should I say, characters.

Imagine the John Malkovich multiplication scene in Spike Jonze and Charlie Kaufman's Being John Malkovich stretched to feature length, and you begin to get an idea of the rather freaky nature of this film. It's Me, It's Me starts out as broad, quirky comedy, but becomes gradually darker and more violent in the later passages as the implications of its premise are more deeply explored and the complications become literally murderous.

Hitoshi (Kamenashi Kazuya) is working a dead-end job at a big electronics store, having given up his dream of being a professional photographer and resigning himself to a life of mediocrity. He spends the days engaging in playful banter with his coworkers, and enduring the taunts of his creepy, tyrannical boss (Kase Ryo). One day, while having lunch at a fast-food joint, Hitoshi impulsively walks off with the cell phone accidentally left on his tray by a wheeler-dealer diner sitting next to him.

Faced with a rapidly depleting bank account, he pulls a popular scam, so common that the police regularly send out calls to people warning them against it. Hiroshi calls the person's mother (who has been incessantly calling the phone's owner), and inspired by a passerby, he poses as the woman's son with the words, "It's Me! It's Me!" With the fake story of a friend's car accident he caused, he is able to get 900,000 yen transferred to his bank account.

Almost immediately after, pangs of conscience begin to afflict Hiroshi, and he sets out to return the money. But thereafter begins Hiroshi's trip through the identity rabbit hole: when he meets the phone owner's mother, she recognizes him as her own son, calling him "Daiki," the name of the man who Hiroshi swiped the phone from. Even more bizarrely, when he tries to go back to his own home, Hiroshi's own mother thinks he is a stranger, and calls for the police. Another young man, who looks just like Hiroshi but answers to the name Daiki, has taken his place, and tells him of a third look-alike who has come around, claiming to be Hiroshi. Soon, the three get together and build a rapport, starting a small "Me Club," and filling in for each other at work and other places as the others need.

Things are rather fun and playful, as they go with the flow of this inexplicable occurrence. But things get more complicated, and much more serious, when suddenly more Hiroshi copies begin popping up (including at least one female version), and as the Hiroshi population increases, they begin to turn on one another, "deleting," that is, murdering one another to find the original (if such a thing exists). Thrown into the mix is a romance Hiroshi embarks on with a beautiful married woman (Uchida Yuki), he meets at the store; her gangster husband and crew don't take too kindly to Hiroshi's attentions toward his wife.

Kamenashi's performance as the multiple Hiroshis is the central attraction, as he adeptly pulls off the many personalities he is called on to portray, like a latter-day version of Peter Sellers or Alec Guinness. The film he is in, based on a novel by Hoshino Tomoyuki, impressively takes advantage of digital video technology, and its ability to convincingly create copies of itself, to comment on the very nature of this medium. Miki, beyond the wild comedic scenario he has created, also offers a fascinating exploration of the themes of identity theft and our increasingly digitalized existence, represented by the many avatars of his protagonist that overpopulate his film.

The simple sentence "It's me" takes on many meanings over the course of this journey; it transforms from a casual greeting or a way to scam cash, to a desperate plea, and finally to an assertive declaration of one's worth as a unique, non-replicable individual.