Miki Satoshi on IT'S ME, IT'S ME, Directing 33 Kamenashi Kazuyas, And His Weird New TV Drama 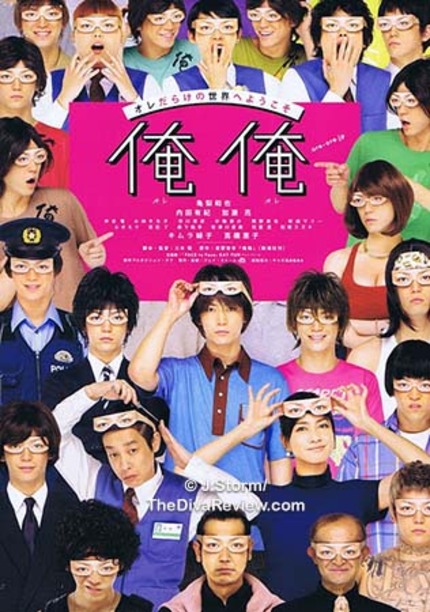 I had the chance to speak with one of the brightest directors in Japan; Miki Satoshi moved to features after finding fame as a television comedy writer. Miki blends his wonderfully weird humour with the question of identity in the festival hit, It's Me It's Me (Ore, Ore).
The Lady Miz Diva: I see a lot of other artistic references not only in IT'S ME, IT'S ME, but in your other works. Is art, in particular, surrealism, an influence on you?

Miki Satoshi: I had a lot of those influences from the beginning because before I started making movies, I was a comedy writer for a TV variety show, so I've had influence from surrealism. I think it's super-realism. Do you know that that image from Salvador Dali's Un Chien Andalou with the ants coming out of the hand? I always liked that art, so it comes out in my films. I once went to Dali's house to research in Spain.

I'm curious about the scene toward the end between the two main copies, where Daiki says, "We are both me," and Hitoshi responds, "That's wrong, we are different people." Is that scene meant to say that he is taking ownership of himself and who he really is?

To them, for both Hitoshi and Daiki, it's a very big meaning of those lines. It's very important for yourself to be convinced that you are you. So it is the main theme, the bottom line of the It's Me, It's Me issue here in the film. It's like when you look at others through your eyes, it's only you.

The female character, Sayaka, seems to genuinely like Hitoshi and yet when she finally confirms that and says "accept someone who accepts you," she undergoes a tragic transformation. What did she represent?

He needs Sayaka. His mother doesn't recognise Hitoshi as "Ore," as "Me." Hitoshi thinks he's comfortable with his relationship with his mother because she doesn't recognise "Me." Then Hitoshi finally meets this muse. She's the only person to understand when it's you (Hitoshi), but then Hitoshi loses her at the very oddest stage of the film and that was the setting I was thinking of from the first place when I started writing the script.

To play multiple roles in a film is a challenge for any actor. Was Kamenashi Kazuya hesitant to try or was he up for the challenge of 33 different character copies? How were you able to differentiate them?

Kamenashi was very confused as to why the producer offered him this role. (Laughs) He's a very popular and well-known pop idol in Japan and he's a newscaster on TV and he reports for the baseball games. He's a singer, he's an actor on TV dramas, a movie actor and a pop idol, so he has different faces in his daily life before this movie. I was very confident as a director in the first place, because this main actor is not only an actor, so he can switch the different roles that he was expected to play.
So, on the set, he really needed to have timing or the cues to switch the personalities. For instance, it was the wigs they'd have, or the styles they'd wear, or the make-up. We knew it was a different person in the different clothes. And then it was a cue again to become a different person, then we started from there, "Okay, this kind of person moves like this or walks like this." That was the way I directed him.

It sounds very challenging on both sides.

It had a very big meaning for me as a director if we both could challenge that art.

Do you prefer it when an actor has their own ideas about a character, or do you have a more strict interpretation of how you want your cast to interpret your script?

I had two different ways to direct Kamenashi because Kamenashi has a very good sense of acting. So I would say, "Look at this and turn your eyes this way. Move this way" very precisely on this scene; but on the other scene, maybe I will let Kamenashi have the freedom to act as he likes. But I don't let the actors do improvisation of the lines; I like them to do exactly what is written in the script.

It is interesting that you took someone from one of the most famous idol groups in Asia [KAT-TUN] to play a nobody, who is suddenly everywhere with all the eyes on the world suddenly on him. Even on the walls in the streets, there are literally eyes everywhere.

I really like that. Usually people don't find it - not everybody - but I'm really happy that you found out that everywhere there's eyes looking at you.

Not only Eri Fuse, but I have the same background players all the time like Ryo Iwamatsu and Yutaka Matsushige. So, for me, it's like a band, they're like the bass player, the trumpet; they're who makes the rhythm, who makes the best atmosphere for the films. They make my world, then I make the comedy so I have to set up the mood of the comedy movie with them first with all those players. Then I bring in the main saxophone player or guitar player, who is the star. That's how I orchestrate the films.

You've said that Japanese audiences didn't quite get IT'S ME, IT'S ME and what it was trying to say. How do you account for the great reception your films have gotten in the west?

The Japanese audience knows my background before I made movies; that I was a writer for TV and theatre, so they have more information than the audience outside of Japan. So when watching my movies, many Japanese audiences or press have a filter. The foreign audience is more natural towards my films. That's the biggest difference. I feel this very much because my film, Adrift in Tokyo played in the Udine Far East Film Festival, where nobody knew who I was, and I went there for the first time and watched the film with the western audience and it was so much fun how the foreign audience received the comedy I made.

The sensibilities in your films often seems western or even European in tone and humour. The laughs are very off-hand instead of the more formulaic, 'Okay, you're supposed to laugh here.' What are some of your comedy influences?

Considering the great response you get in the west and your many western influences, have you considered making a film with western actors?

This interview is cross-posted on my own site, The Diva Review. Please enjoy additional content, including exclusive photos there.
The film is now playing in select U.S. theaters, including New York City's Cinema Village. Visit Pictures Dept. for more information.
Tweet Post Submit