Fantasia 2013 Interview: Talking IT'S ME, IT'S ME With Miki Satoshi, Adrift in Montreal 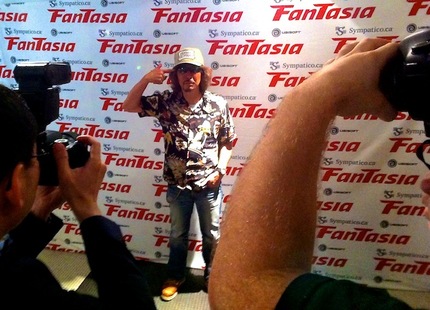 Director Miki Satoshi is perpetually seen around the festival wearing a button-down Hawaiian shirt, sunglasses (even at night), and a trucker cap featuring the spartan logo of 'Standard California.' He takes off the latter for an occasional adjustment and you can see his wild, bushy hear retain the exact shape from the mould of that hat, its personality very much defined by its environment. He is quiet and a bit reserved, opting for cranberry juice rather than lager at the pub on the evening prior to the screening of his latest film, It's Me, It's Me, but is quick to laugh and is charmingly accommodating.

There are many fans of the Japanese director's work in these parts (myself included), particularly of his previous indie hanging-out film, Adrift in Tokyo, wherein two people, very much at odds with each other, spend time wandering around the vast city talking and encountering surreal situations. His latest film tells the tale of a meek twenty-something, Hitoshi, who goofs off with his eccentric co-workers at a big-box electronics store. On an uncharacteristic impulse, Hitoshi steals a salaryman's cellphone and further uses it to grift some money from the man's relatives. The resulting guilt causes Hitoshi's world to take on far more than just a hint of the bizarre.

Almost immediately following its screening at the Imperial Cinema in Montreal, I had a chance to sit down with the director (with the translation assistance of Hidetaka Yoneyama) on a cozy terrace. Echoes of the booms and pops of fireworks from the Just For Laughs village provided an ominous ambience for a casual conversation in the brisk evening night breeze; it was just another night in another big city.

ScreenAnarchy: With your films, including ADRIFT IN TOKYO, you use the city, urban landscapes, and architecture to help tell the story of the characters. Could you talk about that about this film.

Miki Satoshi: At first I was interested in American photographer William Eggleston. His photos, along with how the Coen Brothers use Los Angeles and film noir style in Los Angeles in The Big Lebowski, and also how David Lynch uses smaller towns in America, are big influences on me. Currently, in Tokyo, people are leaving the cities and going to the suburbs. People are living in the suburbs with big box stores to live their shopping lives and go to the cinema, all in the same place. That was the starting point. The 'sameness' in the landscape, which is multiplying across the country. And people, everyone is getting closer to this 'sameness,' only being different with clothes or outfits. This is the idea behind It's Me, It's Me.

I think of you as an optimistic filmmaker. Hitoshi's strange journey is closer to self-discovery of Frank Capra than Franz Kafka or Edgar Poe. Do you see yourself as such?

I'm very glad you saw this. In Japan, there were few who saw the positive aspects of the film. You are very right! The guilty stares of the people (and the city signage) at Hitoshi are his conscience.

IT'S ME, IT'S ME asks the question of whether you can actually know yourself, or do you need other people, family, strangers, to act as mirrors to yourself. I feel that is a large element in the film.

This is the main theme of the film. You cannot find the personality of Hitoshi if he stays by himself. You can see the character and personality of Hitsoshi when he is with someone else, his mother or his co-workers. But it is less possible to see his personality when he is with Daiki and his other selves. When the actor, Kazuya Kamenashi, when he was playing three characters in a scene, he asked me how to play Hitoshi. I asked him to play that 'main' version of himself without much reaction or character. He had to reduce most aspects of himself in that particular performance to make the film work.

Kazuya Kamenashi is a very famous J-Pop singer in Japan and in real life he has a lot of faces, as a singer, an actor and a presenter, and this involves a lot of personas in his actual and media life, the same way people go on Facebook and Twitter and make blogs and create their own personalities. He is, of course, capable of something bigger, like Eddie Murphy or Jim Carey, but I didn't want him to do that. Not that those actors are not funny or diverse, but for the 'main' Hitoshi, that was not what i was looking for in this world.

How difficult was the technical process of getting so many Kazuya Kamenashi's into the frame at the same time with relatively small resources?

At first, we could not use the motion control camera. I didn't realize at first how hard it would be, especially all the times when there were three of them the timing was very difficult to get that down as we wanted. If you have a green screen it would be easier, but to do in daily life, in real rooms, backgrounds people are used to, there were challenges in getting that perfect. When the characters are in different planes of focus, it was also very complicated.

But, for an independent movie, it has become easier with everything digital. When various painters could go anywhere after paint was available in tubes (instead of having to make their own paint), it becomes easier to paint wherever you want. This is how I feel newer technology allows many filmmakers to leave film privileged studio kingdoms of money and position behind and make films in any location, deliver people there. Just like anyone can make a film anywhere now for YouTube. It is easier and it is better!

Hitoshi himself hides behind technology. He is a wannabe photographer, not the subject of the photographs, he uses cellphones to tell lies. He steals money with Daiki's cellphone.

I wanted to put this trap for Hitoshi, like falling down the hole in Alice in Wonderland, that he uses technology to create a parody of reality.

In a way, IT'S ME, IT'S ME is also like a very funny version of Edgar Allen Poe's A TELLTALE HEART or WILLIAM WILSON. Do you read Poe?

Can you talk about the gags, then. There is a lot of physical humour, particularly at the beginning of the film, to ease you into Hitoshi's world.

In this story, you can see the people, when there is special effects, they do not touch each other. It's very rare for them to directly touch. Sometimes, I cheat and show they are touching, but mainly, the three shouldn't be physically touching. As there is a lack of touching, I wanted to start in the beginning to have him kicked, kissed and otherwise physically touched with the other characters.

The femme fatale is the last person to touch Hitoshi, and this causes her to become a "Me." I did aim for a moment of tragedy in the film when this happens. Maybe, if you see the film a second time and look at who is touching who, you might see the film in a different way, one not easily seen on first viewing. See it again. [Laughs.]

I look forward to doing that. Thank you for taking the time to talk about your film with me. Are you working on anything at the moment you can talk about?

Yes, I am working on a show for Japanese TV, a procedural show involving two girls found dead, strangely with their stockings pulled up over their heads. It involves a serial killer, and the police, and an eccentric, ugly reporter investigating. I cannot say more at the moment, but if I make another film and bring it to Montreal, I hope we can talk again. 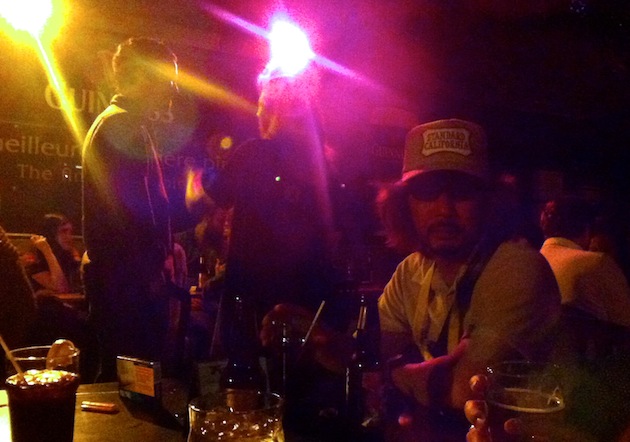