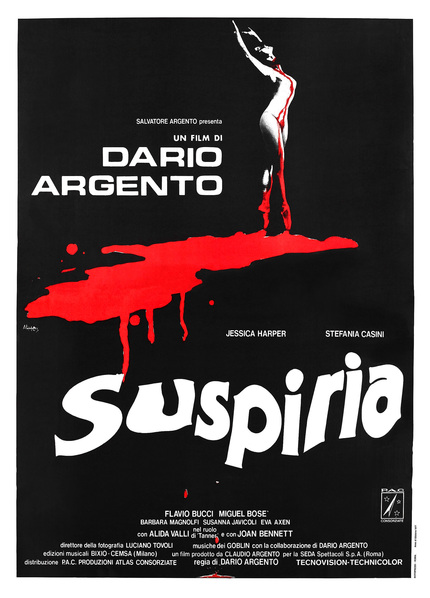 This announcement kind of speaks for itself, but it is the news horror fans didn't know they were waiting for!

Synapse Films, one of the premier cult video distributors in the world, has licensed Dario Argento's masterpiece Suspiria for release on home video in the USA. Suspiria has been subjected to substandard Blu-ray releases in the UK and Japan, and I have been waiting for a company with a solid track record to take hold of this property and do it right. I couldn't have asked for a better result than Synapse. From their releases of classic Hammer films to sparkling HD restorations of '80s trash grime like Street Trash, Synapse has a spotless record when it comes to quality.

No details have emerged regarding release dates or extras, however, I'm sure we can expect greatness. If all goes well I'm hoping for the extras from the old Anchor Bay/Blue Underground special editions to get ported over in addition to whatever new material is unearthed.

This is most definitely good news.

"I've been involved in the restoration and release of many films in my career, but SUSPIRIA has always eluded me, until now," says Donald May, Jr., President of Synapse Films. "It's one of my favorite horror films and I'm ecstatic that my business partner, Jerry Chandler, was able to negotiate with the rights holders to release this film. This is going to be an amazing project
for us."

Synapse Films, Inc. will work closely with Technicolor Rome and Technicolor Los Angeles to create an all-new high-definition 2K scan from the original negative for a possible 2014-15 video release. "It's important to spend as much time as possible to create the definitive high-definition home video version for the fans," May explains. "We're going to take our time with this one."

Synapse Films, Inc. is currently planning the extensive work on SUSPIRIA in conjunction with Technicolor, utilizing both their Rome and Hollywood facilities. The film scanning will be coordinated and supervised by Technicolor Hollywood's Director of Restoration Services, Tom Burton, whose film restoration credits include Ridley Scott's BLADE RUNNER, Georges Méliès' A TRIP TO THE MOON, and Blake Edwards' BREAKFAST AT TIFFANY'S.

Final specifications, retail pricing, and extras for the Synapse Films release of SUSPIRIA will be announced closer to the as yet to be determined release date.

Do you feel this content is inappropriate or infringes upon your rights? Click here to report it, or see our DMCA policy.
Dario ArgentoHome Videohorror moviesSuspiria