Now on Blu-ray: A Trio Of Terrors From Synapse Films, SUSPIRIA, PATH OF BLOOD, and UNEARTHED & UNTOLD

There are very few companies with as sterling a reputation as Synapse Films when it comes to high quality home video releases. Going back over twenty years, this Michigan based distributor may not have the largest catalogue of releases on the market (though they do just fine in that regard as well), but they have a pretty much perfect track record when it comes to releasing definitive editions of the films they choose.

Synpase has recently released three films on Blu-ray, one clamored over for years by cult movie fans and a pair of lesser known little gems. Dario Argento's 1997 ballet nightmare Suspiria is the obvious high profile release that Synapse have famously been restoring for several years (we first reported on it in 2013) has finally seen the light of day, and it's worth the wait. The two smaller films are Eric Power's fascinating little animated gem Path of Blood, and Unearthed & Untold, a feature length documentary on the making of Pet Sematary.

We took a look at all three and you can see our thoughts in the gallery below.


Christopher Webster contributed to this story. 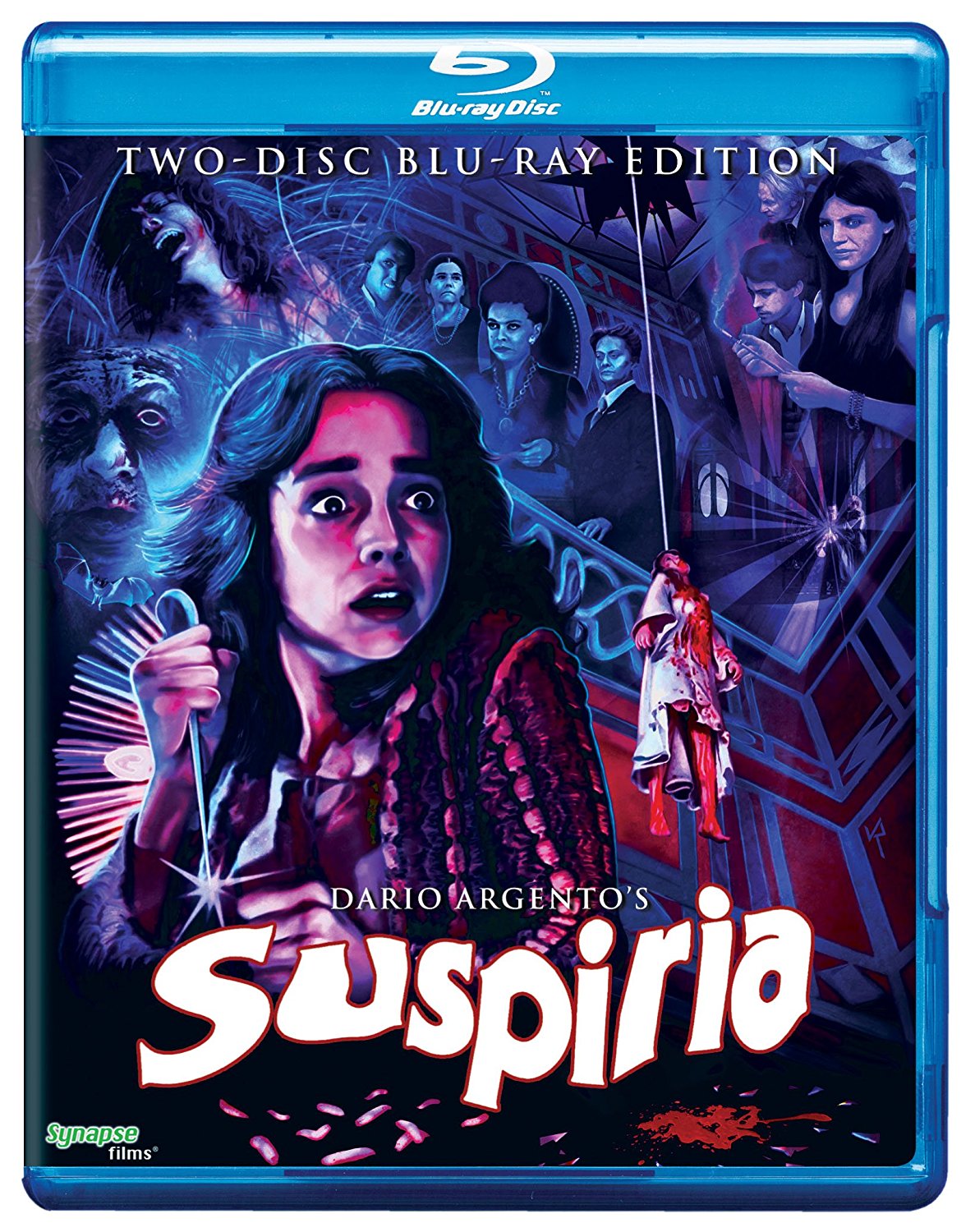 Rather than reinventing the wheel when it comes to Suspiria, a film I know I have written about a few times here, I'm going to drop a bit of my previous review, written at the time of the UK and Australian Blu-ray releases:

For those of you who may have heard of the film, but not necessarily seen it, Suspiria is the story of a young girl named Suzy (played by a young Jessica Harper, fresh off of Brian DePalma's rock 'n roll nightmare, Phantom of the Paradise), who arrives at a prestigious ballet school in the German forest just in time for a murder. Strange goings-on have always been a part of the dance academy, but they seem to be ramping up lately, and their origins are looking more and more odd by the minute. The film moves from tense moment to tenser moment over the course of 98 excruciatingly art-directed minutes as the truth, confusing and nonsensical as it may be, slowly becomes apparent to Suzy.

A masterpiece of style becoming substance, Suspiria remains one of the most invigorating horror experiences of the '70s. Written by Daria Nicolodi, star of several Argento films, the film deals with not only witchcraft and the supernatural, but also the fears of growing up and growing old. As the adolescent students in the academy begin to come into their own sexually, so does their world begin to fracture. It is worth noting that almost all of the primary cast in the film is female, with Harper in the lead and Hollywood star Joan Bennett holding down the fort as the school's headmistress among a deep pool of talented performers only occasionally intruded upon by either effeminate working men or baffled police inspectors attempting to rationalize the fantastic.

Now, on to the goods.

As expected, Synapse's treatment of Suspiria is considerably different from both the UK and AUS releases in terms of appearance and audio. All three releases stem from the same source material, but Synapse did their own restoration and color correction in conjunction with the film's original cinematographer, Luciano Tovoli (the other releases were signed off on by Argento). The resulting image is largely the same in terms of clean-up and detail, but the color correction is where this edition diverges from the others. Whereas the previous editions did restore a bit of the famously lurid color palette, Synapse and Tovoli's version is even bolder in its treatment of the films lighting. Often these kinds of differences are only visible in screencaps, but nobody watches films one frame at a time, so they are typically the kind of thing that don't affect perception of the release. In this case, the difference in startling. The overall image is brighter, giving the appearance of more fine detail, blood is bright red, the shadow detail is insane, and the overall experience is far more surreal by the psychedelic nature of the color palette. As a film that is known for its wacky color scheme, I find that Synapse's treatment of that element of the image is more in line with the experience Argento intended, even if he isn't the one who signed off on this restoration.

In terms of the audio, Synapse is the first and only company to restore the original 4-track stereo surround audio that likely hasn't been heard since the film's original cinema release forty years ago. This new audio track is punishing in the way it presents Goblin's score to an almost overbearing degree. Fans of the film will recognize that the score was always an important part of the atmosphere of the film, but with this new audio option, it feels even more like its own character, helping to tell the story and push the narrative along. Truly the only way to watch.

Another aspect in which Synapse distinguishes itself from the other releases is a completely different set of bonus materials, all presented on a separate Blu-ray disc to ensure max attention to the feature on the main disc. While the UK and AUS versions shared a lot of material, Synapse's edition is almost completely different, presenting a conundrum to fans - like me - who want the most complete edition possible. Here we get two commentaries, featuring Troy Howarth, and horror historians Derek Botelho and David Del Valle both of which are worth listening to for their depths and mix of historical and anecdotal tidbits. There are featurettes on the locations used in the film, a 30 minute visual essay from Michael McKenzie (Do You Know Anything about Witches?), a new retrospective documentary (A Sigh From the Depths) exploring the legacy of the film, and interview with star Barbara Magnolfi, trailers, TV spots, and radio ads as well as alternate opening credits sequence from the US release version and more.

In terms of the A/V presentation, Synapse is the clear winner in my eyes. However, there are enough difference among the extra materials presented on all three recent editions to recommend each. If budget doesn't allow, definitely get the Synapse two-disc edition, it's the overall champ. 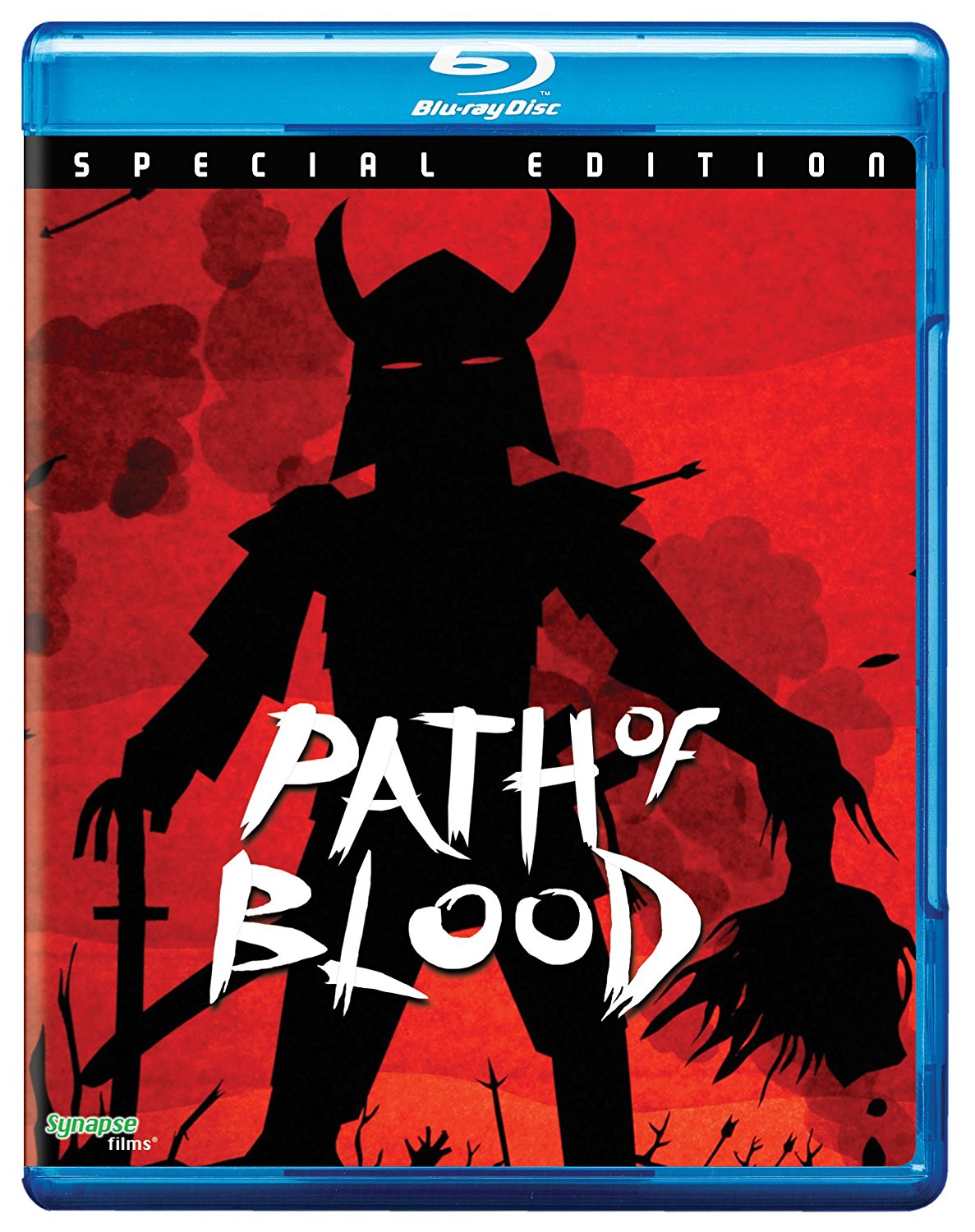 Eric Power's animated feature Path of Blood is an unusual little film that should definitely be interesting to fans of samurai cinema, experimental animation, and South Park. The film was made using the same paper cut style that South Park brought into the public consciousness over twenty years ago, but this time it's being used for dramatic effect and the results are really entertaining. Hovering somewhere between the style of the more serious Samurai Trilogy and the gloriously gory Lone Wolf and Cub series, Path of Blood is an utterly unique experience that adventurous film fans won't want to miss.

When this release was first announced, our Christopher Webster had this to say:

They say everyone now has access to the tools to make a film and Path of Blood is something of a testament to the romantic idea that anyone can make anything if they just put their mind and talent to good use.

A blood-spraying, sword-clanging, mind-blowing samurai epic, Path of Blood was made entirely inside the confines of one man's kitchen and resonates with the kind of singular artistry that only the rarest of DIY projects can offer.

Agreed across the board, the film is a lot of fun and at 60 minutes doesn't wear out its welcome.  Path of Blood is an easy recommendation.

Synapse Films Blu-ray release of Path of Blood is the kind of stacked edition that filmmakers on the lowest budget spectrum dream about. Not only is it beautiful to look at, Synapse and Power have worked to fill the release with great bonus material that helps to contextualize the film and the journey taken by its creator toward completion. In the making-of featurette Power not only explains his journey, he treats it as a journal, chronicling the entire film from conception to completion and all of the lessons he learned along the way. It's an entertaining and informative look at a unique film that budding filmmakers and fans alike will enjoy. The original short is also included alongside a couple of trailers and an image gallery.

This was a total left field release for me and I'm super glad I got a chance to check it out. I hope Power has more chances to showcase his talent, because making this film took a lot of balls and I'd hate for it to be his only legacy when there is clearly a ton of potential here. Definitely check out Path of Blood. 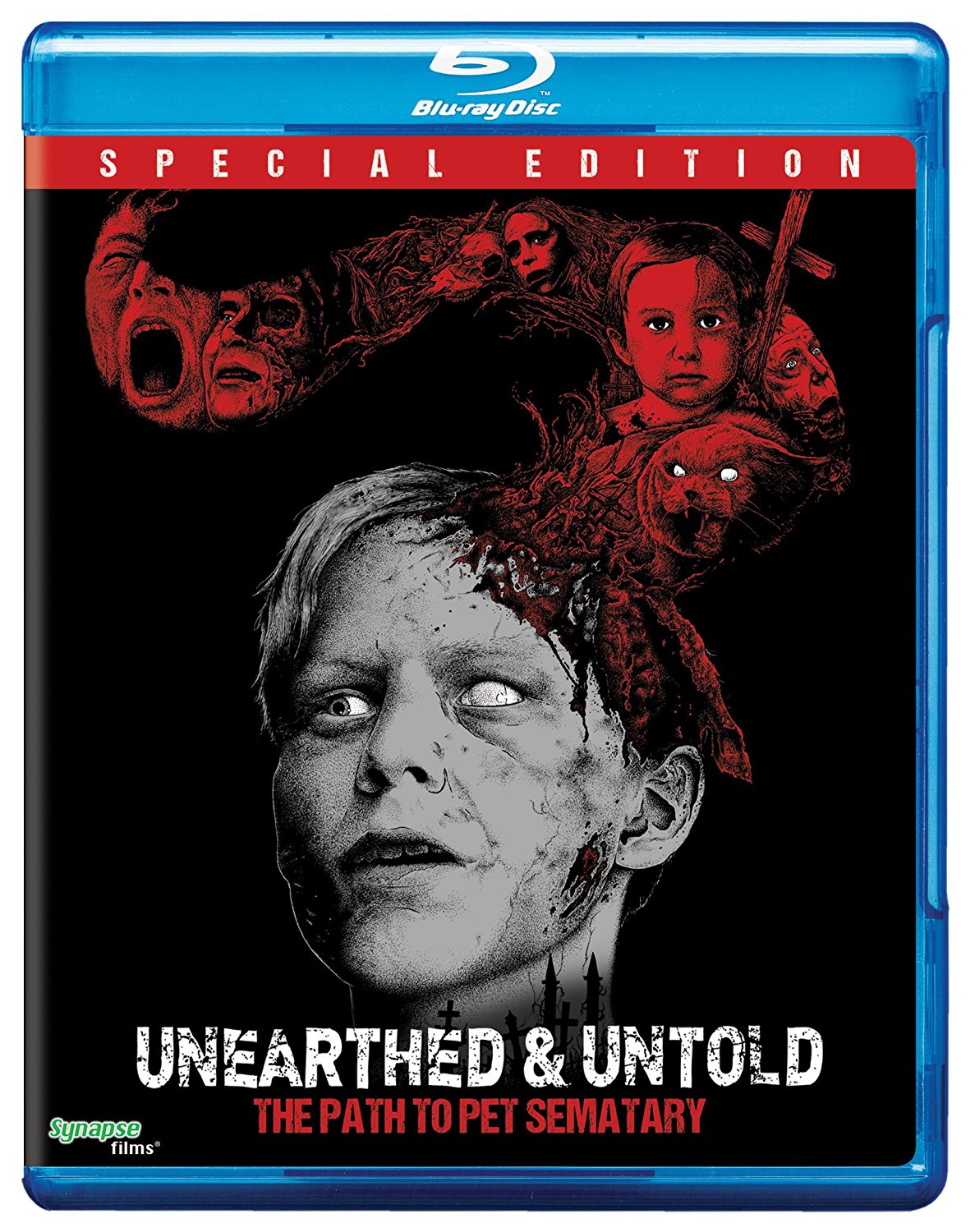 Unearthed & Untold is a feature length documentary on the making of Mary Lambert's Pet Sematary, a film that remains among the scariest Stephen King adaptations ever made. Made completely as a passion project without any real commission by John Campopiano and Justin White, the result is a very solid look at the film, its production, and legacy that fans will definitely appreciate.

The documentary covers a lot of ground, interviewing plenty of the surviving cast and crew along with a lot of locals who remember and were occasionally even involved with the production back in the late '80s. As a film made by fans, the documentary does veer into hagiography from time to time, but as a fan myself, I didn't mind a bit. It's an interesting look at a film that - like most films - had its fair share of challenges on teh road to cinema screens. Director Mary Lambert, at that time an unknown quantity after having been known primarily for making music videos, shares her own challenges stepping into the making of a horror film, a world she knew very little about. The story is a fascinating one and well worth watching, if it feels a bit like a glorified DVD extra, it kind of is, but few get teh chance to breathe like this one does and Synapse is to be commended for acquiring it and giving it a great release. It works well alongside their releases of the Just Desserts Creepshow doc by Mike Felsher and Document of the Dead by Roy Frumkes.

Making-of documentaries being what they are, the A/V presentation of this feature is as good as can be expected with lots of archival material built in and plenty of talking head interviews. Nothing to complain about, nothing to write home about. It gets the job done.

Synapse and the filmmakers do provide a ton of bonus material on this release ranging from unused interview footage with the filmmakers to a pair of audio commentaries, to alternate takes and deleted scenes, and plenty of location photos, alternate art mock-ups, and archival on-set footage. It's a stacked release that is definitely worth checking out for fans of the film. Unearthed & Untold is highly recommended.

More about Path of Blood