Review: INSIDIOUS: CHAPTER 2 Teeters On The Edge Of Horror Hokum 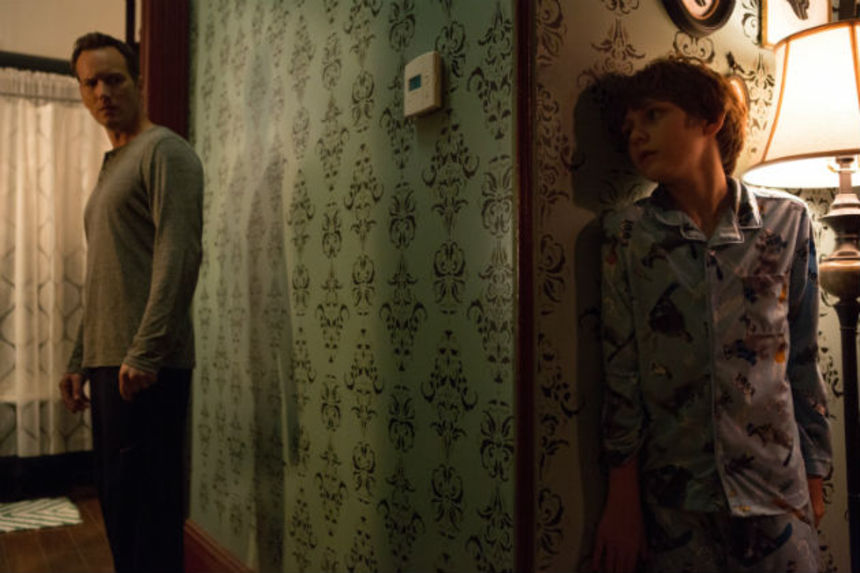 Less nerve-jangling than nerve-nudging, Insidious: Chapter 2 nontheless tweaks horror conventions with verve and surety of craft, taking the sequel into the realm of confrontational thrillers with a supernatural twist.

It is a very bizarre realm, indeed.

James Wan has directed a string of genre movies since Saw in 2004, including 2010's Insidious, and has clearly learned a thing or two. 'Chapter 1' set up a wild premise in which a child falls into a long coma, only for his parents to learn that he has actually traveled through astral projection to a sinister realm referred to as The Further that coexists with the known world.

The main action of the sequel begins immediately after the apparent resolution of that situation. Josh and Renai Lambert (Patrick Wilson and Rose Byrne) and their three children have temporarily moved out of their home of Josh's departed mother Elise (Lin Shaye) *. Renai is still shaken to the core by horrific recent events, while Josh and the kids all seem fine. (Maybe a little too fine, if you take my meaning.) Renai's Josh's * mother Lorraine (Barbara Hershey) still senses sinister forces afoot, however, and she comes for a visit along with Elise's * paranormal investigation partners Specs (Leigh Whannell) and Tucker (Angus Sampson). It quickly becomes apparent that someone -- or some thing -- has traveled from The Further into the realm of mortal humans, posing a grave danger to the Lambert family.

The first Insidious gave standard haunted house tropes a good shake by positing that supernatural forces were inhabiting individuals rather than structures. (Thus, the family initially fled one home after another, only for the hauntings to continue.) And then it became truly metaphysical, cutting all tethers to reality. That was both a strength and a weakness; a strength in that it tried something different, and a weakness in that it didn't entirely succeed.

Wan and actor/writer Whannell, who first collaborated on the torturously grim Saw before moving on to the Hammer-style horror of Dead Silence, are not looking to repeat themselves, which is potentially a very good thing. In its atmosphere and tone, Insidious: Chapter 2 reminds of cheap 60s horror pictures. with a dose of 90s-style 'gotcha' sound and music cues. (Of course, those were closer to a poor man's version of Bernard Herrmann's score for 1960's Psycho.) The new film is replete with stark lighting and Dutch angles -- perhaps a tip of the hat to German expressionism? -- and the performances are anything but subtle, to the point that when one character's 'true nature' is revealed, it's surprising only to the inattentive and the easily spooked.

The arch self-awareness constantly threatens to push the film into self-parody and lessens any possible impact; needed tension never builds and the focus is constantly shifting. So the film as a whole teeters on the edge: not quite full-blown horror, not quite post-modern plaything. Insidious: Chapter 2 is altogether a lesser film than its predecessor, which, despite its faults, delivered good, strong jolts to the nervous system, in large part because the characters elicited empathy for their plight. (It's also a fascinating compare-and-contrast with Wan's The Conjuring, a more traditional, and much more effective, atmospheric, and tense period horror movie that, by a quirk of distribution strategy, hit North American theaters about two months ago.)

Yet, for all the well-intentioned efforts of the filmmakers to do something different, not to mention Patrick Wilson giving one of his juicier performances, this chapter simply doesn't read as well as the first one.

*: Updated 09/13 to correct relationships between characters. Thanks to commenter Warner Brown.