Review: THE CONJURING Will Scare You, Not Scar You 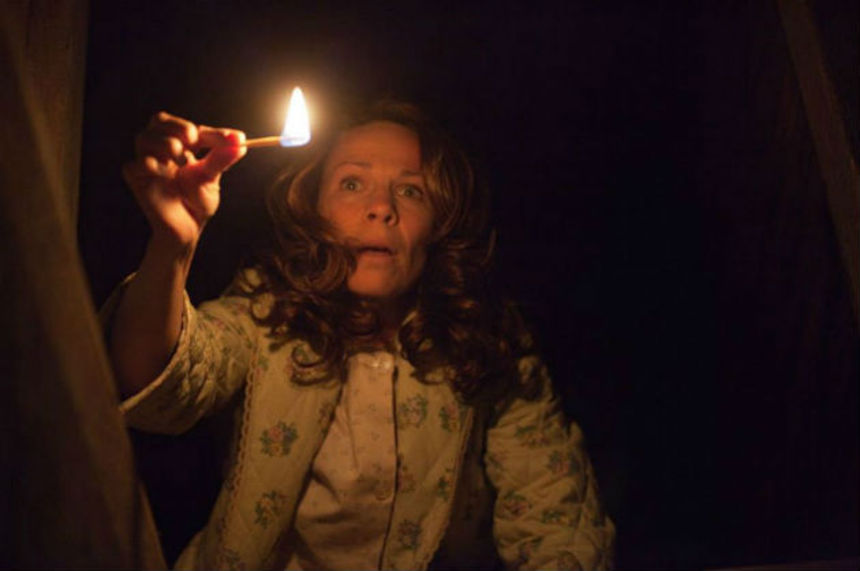 Let's be blunt: most wide-release horror films are bad. They tend to be either watered-down, teen-friendly PG-13 mediocrities that aren't scary; or gruesome, R-rated endurance tests that aren't scary either. It almost feels miraculous when something genuinely scary finds its way onto 2,000 screens, like the first Paranormal Activity (2009), Insidious (2010), and Sinister (2012).

This year's pants-wetter is The Conjuring, a deviously creepy tale directed with smooth, fun-loving confidence by James Wan (who, not coincidentally, also made Insidious). Set in 1971, the story comes from the files of Ed and Lorraine Warren, the real-life husband-and-wife paranormal investigators who would later become known for their examination of a certain house in Amityville, N.Y. The Conjuring is thus "based on a true story," in the sense that the Warrens really did have a case like this one, though the veracity of the supernatural stuff remains, shall we say, an open question.

Played here by Vera Farmiga and Patrick Wilson, the Warrens are contacted by Carolyn Perron (Lili Taylor), who has just moved with her husband (Ron Livingston) and their five daughters into -- stop me if you've heard this one before -- a huge, rural, 150-year-old New England house with no neighbors but a lot of spooky activity. Five kids is more than the story really needs, but it gives Wan and his writers, twin brothers Chad and Carey Hayes (The Reaping, House of Wax), multiple vehicles for mysterious events. One girl sleepwalks, another makes an imaginary friend, another feels something pulling her foot while she sleeps. Might as well share the wealth, give everyone a chance to feel haunted!

It will not shock you to learn that something terrible happened in this house years ago. In fact, very few of the details, either in plot or atmosphere, will shock anyone who's seen a horror movie set in a menacing house before. The filmmakers throw everything at the screen: ghosts, demons, possession, scary dolls, eerie music boxes, stopped clocks, dark basements, secret rooms, creepy kids, weird animal behavior, and so on.

But guess what? It works. No one will accuse The Conjuring of being overly original, but it doesn't feel derivative, either, any more than a chef is derivative for using ingredients you've eaten before. It's the way the ingredients are used that matters, and Wan knows what he's doing, avoiding (for the most part) cheap jump-scares and other gimmicks in favor of escalating tension that periodically erupts into good old-fashioned terror. We could do without the red herrings connected to the Warrens' own family life -- the story's one narrative misstep -- but they don't detract much, and they do help flesh out the loving couple as sympathetic characters who earnestly believe in their work.

It's actually not the Warrens but the two women, Lorraine and Carolyn, who are the most crucial figures in the story, and Vera Farmiga and Lili Taylor both perform with a level of commitment you don't always see in horror films. The characters are empathetic, motherly types, and the actresses give them realistic edges. There's authenticity in Wilson, Livingston, and the young actresses who play the daughters as well.

Perhaps most surprising is that Wan does it all without gore or cruelty. (The R rating it carries in the U.S. is strictly for tone. That's right: it's rated R for being scary.) Everyone has a different threshold for this, but some movies are so brutal and unsettling that while you wouldn't hesitate to call them "good," you'd stop short of calling them "fun." The Conjuring is fun -- intense, yes, but in a way that conjures chills, not revulsion. Wan is serious about scaring us, not interested in traumatizing us. He delivers a steady stream of fist-clenching suspense and well-choreographed surprises.

The film opens in theaters across North America on Friday, July 19. Check local listings for showtimes -- if you dare.