Interview: Nicolas Winding Refn On Sci-Fi And The Genius Of JODOROWSKY'S DUNE 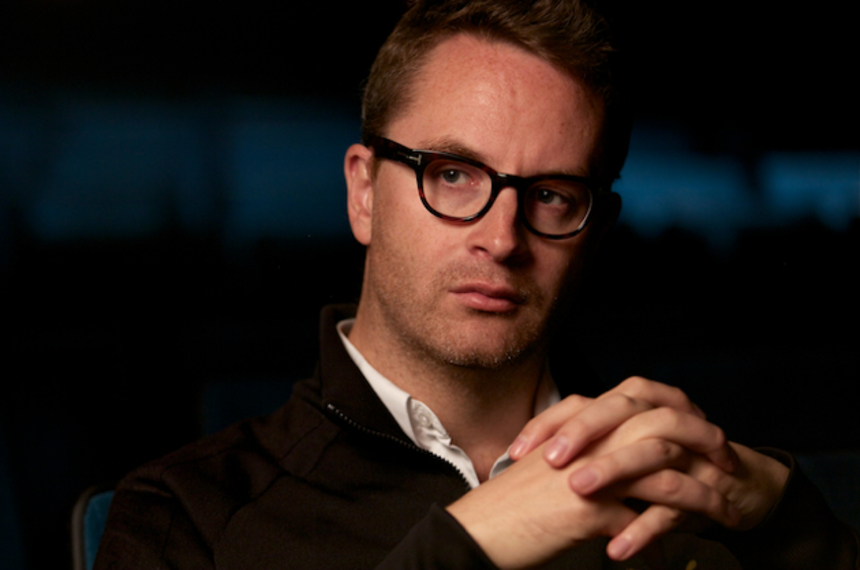 A few months ago I was lucky enough to spend a couple of hours talking with Danish filmmaker Nicolas Winding Refn. While the bulk of that interview was about his latest directorial effort, Only God Forgives, for another publication (which you can read online here), we also spent a few minutes discussing his involvement in Frank Pavich's incredible documentary, Jodorowsky's Dune. With that film's double win at Fantastic Fest last week, where it won both the Audience Award and the Best Documentary prize, now seemed the perfect opportunity to share this brief discussion, which covers Refn's relationship with Jodorowsky, his involvement in the film and his future science fiction projects.
ScreenAnarchy - I recently saw JODOROWSKY'S DUNE, which of course you're in, and I wanted to talk to you a little bit about Alejandro Jodorowsky and his work. ONLY GOD FORGIVES is dedicated to him. Can you talk a little bit about what he means to you as a filmmaker?
Well, there's a personal friendship between us, which is very strong. On a professional level, I think his influence in pop cinema is still very unappreciated. You can say that without El Topo there would be no modern pop cinema. In the same way his inspiration for science fiction movies leads back to an unproduced film called Dune.
The imagery, conceptual art and ideas that were coming out of that project were fantastic. I was fascinated to see how much of it was carried over and seaped into subsequent films, most obviously Ridley Scott's ALIEN.
Oh yeah, but the same thing for El Topo. If it wasn't for El Topo a lot of people wouldn't be around. It was the first midnight movie phenomenon that wasn't a revival. It was a new film that caught on with the future of cinema and created this phenomenon that later led to many magnificent films. But it's also that the extremeness of El Topo in a way influenced all us making films from El Topo on.
It really stays with you, it's incredibly surreal and profound, anarchic and even silly at times. I think to get away with being all those things simultaneously is nye impossible today.
It's very hard, because of course it's very hard to capitalise on that financially, because it's some unsecured territory. But at the same time, the need for it is more enormous than ever. 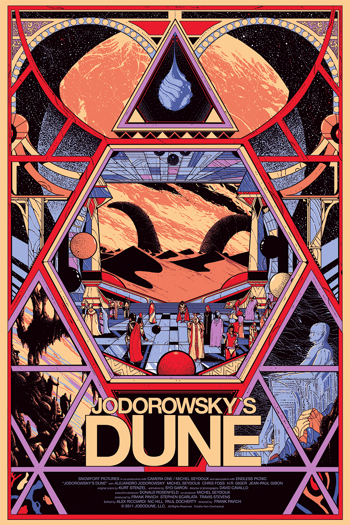 You claimed in JODOROWSKY'S DUNE that you were one of the few people to have "seen" DUNE because of the way he talked you through his vision and that huge book of ideas and concept art. If the stars ever aligned and someone offered you the opportunity to pick up the reins and adapt Jodorowsky's vision of DUNE, would you do it?
I would make - with the inspiration of that night - my own interpretation. I would do something different with it. Because the thing is that they made Dune, David Lynch made his version, SyFy channel made their version, they've been trying to make a new version for ages, so it's almost like Dune is too easy now. Too many examples exist. I happen to really love the David Lynch version. I love all the surrealist filmmakers: Lynch, Bunuel, Jodorowsky. I would put Gaspar Noe in that category.
I read that when you were making DRIVE you consulted Gaspar Noe on how to cave a head in on-screen.
That is true. I was very intrigued in how Gaspar had done the head-smashing in Irreversible for my head smash in Drive. I really love his films and showed them to Tom Sigel, the cinematographer on Drive, to show him some of the madness I would like to capture in our movie. I think he was a little horrified! I still think Gaspar's head smash is better, but I was able to get them kissing before he smashes the head, so my scene goes in different directions.
I understand that ONLY GOD FORGIVES is part of a two-picture deal you have?
Yes, I have another film in the works, but right now I'm really concentrating on my TV show, Barbarella, to see if I can get that off the ground.
Well I can't wait for you to embrace science fiction to see what you do with BARBARELLA.
It's interesting when you say that because in a way science fiction has always been my favourite genre, or horror films, but horror have more to do with the fantastique.
Do you think that's why you are reluctant to do a science fiction film yourself? You're afraid of tainting the genre or not living up to your favourites?
No, it's just I have to find the right idea. I have to find "it". And I've learned that if I stop seeking it, it will reveal itself.
How's it coming along?
Very well, I'm very happy. We're still writing it. I would love to do it for a number of seasons, at least, I have a number of ideas that would see it through a number of seasons. But however you plan for something, I can tell you one thing - it's not going to happen. There's a great story that basically goes like this: How do you make God laugh? You tell him your plans. 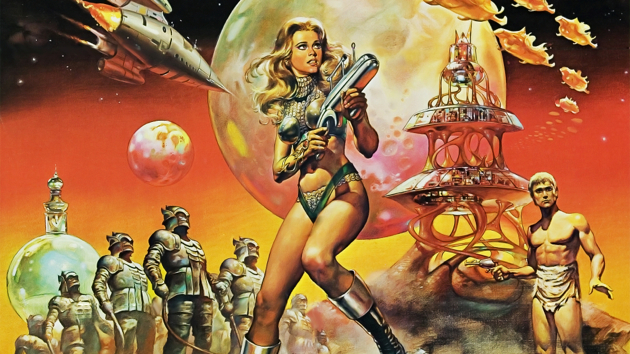 That's funny because one question I have written down here is: Do you consider yourself an optimist?
I think you have to. When you have children you have to be an optimist, you have to hope that you are bringing your children into a good place. Artistically, having been around to witness the birth of the digital revolution I have nothing but admiration and optimism for the future of creativity and I wish I would live another 100 years just to see where things are going. The speed of how it's all changing is fantastic. Who would have thought 20 years ago primal information would basically change every dictatorial rule in the world? It wasn't going to be a gun, or a war or an invasion, it was going to be the Internet that changed our society.
Ironically, something that connects everybody together.
Yeah, and only for the better. I think that would have been a pretty mind-blowing discussion...if you had it 20 years ago. But it's that fear of failure we live in that we shouldn't be afraid of. But we need to try it to understand it, because in the end it is so important. Movies like El Topo, nobody makes movies like those anymore. Gaspar Noe does, but he's one in a billion, and I think Cinema has a much higher purpose than just entertaining us, it should inspire us as well. Making those kinds of films it's not about what to do, you almost have to figure out what not to do. So it's like important that you erase the recipe of success every time you have it, like you erase the residue of disaster every time.
LOGAN'S RUN is dead, right?
It's dead as dead can be. It's a great shame but I realised a couple of things. I was so in love with the original that I think I was disillusioned by the fact that if I made a remake I would be closer to the original, I would be part of the original more than any other, and I realised that that was a lie. That was illusion. It wouldn't be like that. And also if I was going to make a $100 or $200 million movie, and trade off my creative freedom for that price, it needed to be something that was going to outweigh that loss. Because at the same time I'm very lucky to be able to make the films I make, and to exchange that for a larger canvas really needs to feel like the right swap. Logan's Run just wasn't it at the end. But I was able to take one of my ideas and put them into Barbarella, like Dune, I stole a little bit from what didn't happen and put it into something else. That way the trade-off wasn't so significant. But I think that maybe those kind of things only work if you stumble and fall.
Whenever I meet younger filmmakers, and I hate to say this now because it makes me feel so old, I say "You know what? Stumble and fall as much as you can as fast as you can, make all the mistakes in your first couple of movies because when that's when you're going to learn what not to do." That is gonna make you understand what I didn't understand. I was 25, Pusher was out and it had worked, and I was told by a more experienced filmmaker "Do it your way", which I completely misinterpreted. I thought he meant keep your control, you're the man, stick with everything and fuck everyone else. It wasn't until much later n my life that I understood he was saying something else to me. And that's why I always say stumble and fall and thank god if you ca do it as fast as possible, do it when you're young, not when you're old. Because it's harder to come back from. And then steal everything you can. Make it your own, that's what everyone else does. Just don't be afraid to admit it.
Sign-In to Vote
Tweet 0 Submit

NWR always lifts my spirits with his interviews and I can't say that for a lot of filmmakers. I really do think he's got a great down-to-earth approach while still keeping the romantic side of things alive. Every interview of his inspires me to keep writing and keep trying to make something despite it all.

maybe because he isn't from the US and so he isn't full of it? it is a possibility..

Well, he has lived here since he was 8.

No. He lived (past tense) in New York for several years when young but has spent his entire adult life in Copenhagen.