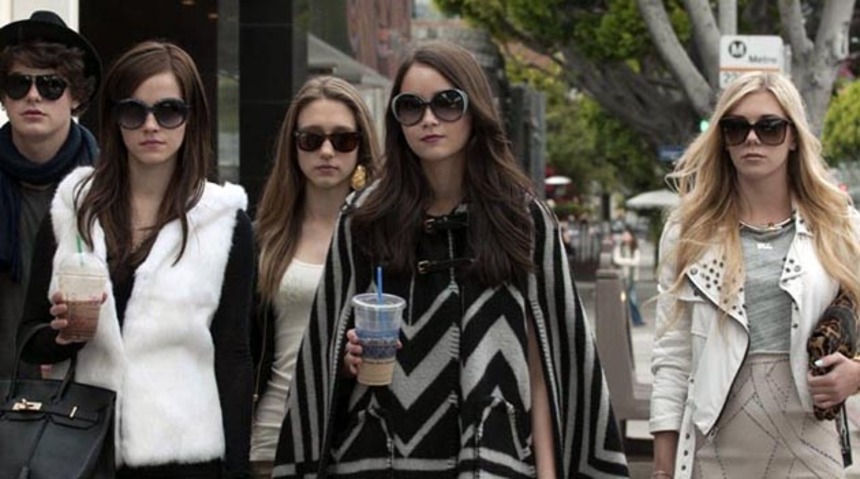 It's difficult to talk much about Sofia Coppola's latest The Bling Ring without addressing this year's other cute-teens-as-criminals film Spring Breakers -- so let's just get the comparisons out of the way right off the bat. While both films can be accused of glorifying crime by taking voyeuristic trips into the lives of good kids gone bad, Harmony Korines's film does it with scathing sensationalist satire that simultaneously disarms the audience and inserts a distance from the acts portrayed. By contrast, Coppola's take on her true-story subject matter is a totally straightforward telling that goes so far to include documentary elements. The result is a glorification of the kids' lifestyle that relies on the true conclusion's punishment to deliver her message. It's the opposite of satire and therefore a somewhat alarming portrayal in a rather unassuming guise. Oh and Spring Breakers is just way more fun.

"Ripped from the headlines," The Bling Ring is a group of high schoolers who track celebrities via online gossip media, breaking into their homes to check out all their cool stuff and swiping whatever strikes their fancies. While we see the teens selling some of their loot on a couple throw away occasions, it isn't very clear how organized the actual for-profit side of the operation is. Instead it seems the band of mostly girls and one guy are primarily motivated by their fashionable swag and the cool factor of what they're up to.

While there is no true protagonist, Coppola focuses slightly more on the relationship between ringleader Becca (Katie Chang) and her new pal Marc. Israel Broussard gives the most competent performance of the film with Marc, yet he's given shamefully little to work with. Questions about his sexuality, his slight reluctance to the crimes, and his talent with fashion are all mentioned without being developed to full blown plotlines. Any chances of turning this into a character driven story about potentially fascinatingly conflicted Marc and his relationship with the dangerously likeable sociopath Becca are eschewed for more fun trips into celebrities' closets -- the consequences always lurking safely in the third act.

And that really gets to the heart of the problem with The Bling Ring. Instead of using character development to teach the audience what went wrong with these kids (or, say, generation), Coppola just takes us on a 90-minute vacation into their fun-filled lives of coke-fueled clubbing and slo-mo selfies. Where is the conflict? Marc receives new-kid-at-school scorn so soft it would make Disney execs request a rewrite. The teens all seem to get along well and the detective investigating the crime doesn't even show up until ten minutes to go. Even a dramatic brush with death is laughed away by the teens joking about how drunk they were driving.

What's left is a straight forward dramatization of events that glorifies the results of the crimes while barely touching on their ramifications. Without characters worth engaging with, the audience's only choice for entertainment is the pretty cool shit the kids are up to. But it's rather clear where everything is headed from the start. That pretty cool shit eventually gets repetitive and The Bling Ring falters on its Louboutin heels and falls flat.

A24 will release the film in the States on June 14.

Do you feel this content is inappropriate or infringes upon your rights? Click here to report it, or see our DMCA policy.
CannesCannes 2013Cannes Film FestivalSofia Coppola