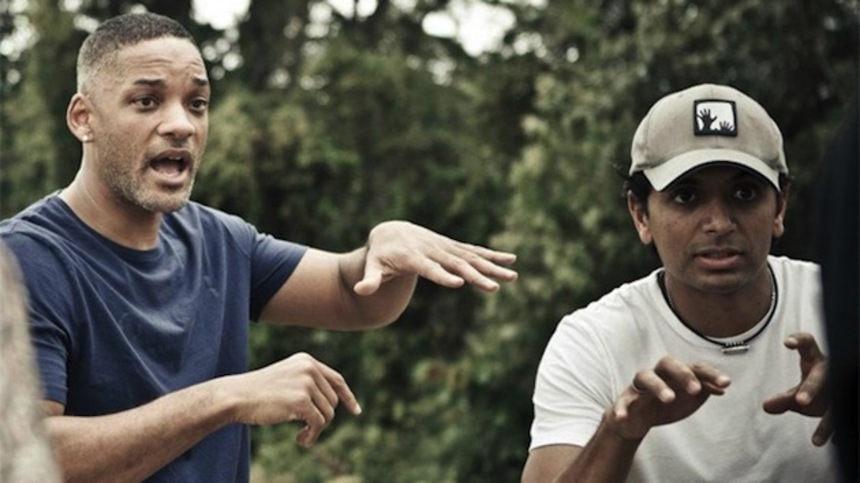 Something entertaining happened on Thursday as the reviews of After Earth began to hit. Right here on our site, Jason Gorber's review (very negative, read it here) was lambasted all day long by the commenting community - deemed "unprofessional," "fannish," (and, to be fair, also the "best. review. ever."). Meanwhile, over on HitFix, Drew McWeeny's review (generally favourable, while still containing an impassioned plea for the reassertion of a "middle" in critical thought) was torn apart in the comments for the opposite reason, with Mr. McWeeny accused of being in the pockets of the studios for daring to give an okay pass to an M. Night Shyamalan film.

Now, of course, "the internet" is not a homogenous blob or hive mind, singularly intent on doing its content creators ill, so this isn't a case of one hand not knowing what the other is talking about. But if the response to Mr. McWeeny's review was what I'd call internet-typical - We Hate Shyamalan, And You Should Too - the response to Jason's review is merely proof that everybody's got their asshole, and an opinion to go with it. M. Night Shyamalan has fans, and they come out on the internet every time one of his movies shows up, even if the director's output has achieved a rare zenith of empirical badness in the more general popular consciousness.

To an extent, though, any critics being ragged on by Shyamalan's fan base this week probably deserve it. I have been hard-pressed, since Thursday, to find reviews of After Earth that are not first and foremost reviews of the film's director. It seems weirdly important for everyone writing about the film to first log a screed about how much the critic in question has disliked (at least) the last four of Shyamalan's films, and maybe all of them.

Well, granted. And providing the context of a filmmaker's body of work around the response to a single film is certainly valid from a critical standpoint. But the trouble with admitting bias - and to call the vast critical hate-on for Shyamalan "bias" is like calling the malevolent tornadoes in Twister "a bit of weather" - is that it comes dangerously close to constructing the appearance of an impossibility of the critic engaging with the work. While no one should be labouring under the delusion that film criticism is an exercise in objective impartiality, it's also hard to respect a review that seems to admit up front that there was no way the film could possibly have received a favourable grade.

Shyamalan, of course, opens himself up for this onslaught of critical fervour, with wide-open arms that seem to be screaming "Come at me, bro!" More accurately, the sweetheart deal that Shyamalan received after The Sixth Sense allowed his evidently impressive ego to run riot without check - and if there's one thing the cultists in the Cult of Celebrity cannot effing stand, it is ego. As many of the reviews of After Earth have reminded us (because the reviews of The Happening and The Last Airbender apparently did not firmly enough reinforce this fact in all of our minds), this is the director who cast himself as a writer with the ability to change the world in The Lady in the Water. As each successive M. Night Shyamalan film emerged into the cosmos with his name stamped stubbornly above the title - "An M. Night Shyamalan Film, M. Night Shyamalan's M. Night Shyamalan Movie" - the writer/producer/director might just as well have been pinning "kick me" signs all over his back and front.

But in addressing Shyamalan on After Earth, the critics (and, even, his fans) are a step behind. After Earth marks the second movement in what is essentially a headlong retreat from the forefront by the director; he is no longer making movies of his own self-satisfied authorship. The Last Airbender saw the director of several critical and box office misfires in a row step behind the armour of an internationally recognizeable brand with a built-in fan base; After Earth sees Shyamalan in as close to hired-gun status as he's ever had on a film. Even the studio has cottoned to the toxic nature of the Shyamalan brand, concealing the director's involvement with the film in every poster and trailer. (Can a film be labeled an Alan Smithee project without the director's consent?)

M. Night Shyamalan is not, then, the droid you're looking for when laying the blame for whatever isn't working on After Earth. Anyone attacking Shyamalan for After Earth without addressing Will Smith first is like the gang of us who chose to pile on George Lucas when Indiana Jones and the Crystal Skull was released. That was another film where there was a key creative participant that nobody likes any more, so we all went out to beat him with tire-irons instead of actually interrogating the work. But it was Spielberg, not Lucas, who gave Indy a son; it was Spielberg, not Lucas, who cast Shia LeBeouf; Spielberg, not Lucas, who took a perfectly serviceable MacGuffin and retrofitted it into interdimensional beings from the space between spaces or whateverthefuck. Who's the bad daddy now?

In the case of After Earth, Will Smith drove the project from soup to nuts, and hired Shyamalan, which isn't actually a bad choice. Shyamalan might be a lost cause when it comes to writing his own pictures (his one-trick pony routine worked fine for two whole tricks, but that's it), but he retains a quantifiable directorial skill set that has nothing to do with his abilities as a writer. Unbreakable is the closest thing to a masterpiece as came out of Hollywood in the year 2000, and the technical craftsmanship of The Village is second to none, regardless of what you think of the third act reveal. If nearly every one of his other films has ranged from problematic to outright disastrous, so be it. The director got paid either way.

There's a whiff of playground bullying about all of this... or perhaps more appropriately to Shyamalan's mien, good, old-fashioned The Lottery-ish scapegoatism. In addition to relieving us of the burden of independent critical thinking, a consensually-agreed-upon single target for a community-wide rage fit is as cathartic as slipping into a warm bath. But I'll tell you what else the critical response to After Earth is: it's old. It's tired. It's a story that's been told about five or six times already. We get it: people don't like M. Night Shyamalan. What else do you have to say?