Review: AFTER EARTH Is Apocalyptically Bad 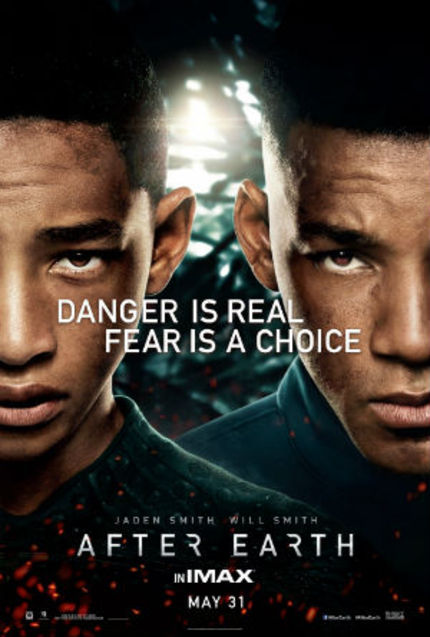 Once upon a time, there was a director who made a film about a kid who saw dead people.
I kind of despised this film at the time, and figured that nobody would fall for the silly farce. Alas, The Sixth Sense became something of a phenomenon, and established its auteur, one M. Night Shyamalan, as a maker of large scale, big event Hollywood films. His next work, Unbreakable, broke me, and I figured I'd never see another of his films again.

I purposely missed out on Signs, and The Village, and The Lady in the Water, each film with progressively lower IMDb ratings, films that are almost farcically bad in terms of poor reputation. Still, each was advertised with the director's name emblazoned on the poster. Like some great author, these weren't just movies, these were films "from writer / director M. Night Shyamalan." And that, it seems, was supposed to mean something.

It's probably no coincidence that as each film decreased in terms of audience appreciation, the prominence of the director's attribution on advertising materials has slipped into nothingness - in what I believe to be a first since Sixth, M. Night's name doesn't appear at all in much of the advertising for this film. Check out the poster; it's as if the studio is well aware that this guy is aesthetic poison, a two-bit hack who  made a bit of cash with a few clichés and has been milking it ever since.

No, instead we have in giant presentation the other sad element of this film. I don't begrudge Will Smith his success, but for years now he's been the worst part of the films he's been a part of (see MIB:3 for proof). This is the guy who turned down QT's Django Unchained because, to quote from an EW interview,  "Django wasn't the lead, so it was like, I need to be the lead. The other character was the lead! I was like, 'No, Quentin, please, I need to kill the bad guy!' "

Instead, what's up Mr. Smith's alley is a vanity project for him and his child, pure and simple. He's even credited with coming up with the story. And for that, dear readers, the star of this show is to be made fun of.

Smith is joined on the poster by his scion, young Jaden. I'm not jaded about this kid, yet, for I've managed somehow to skip the other films, the likes of Karate Kid, or the other project he did with daddy, The Pursuit of Happyness. A (former?) Hollywood A-lister wants to get his kid all famous and stuff, and helps draft a big sci-fi project for him, who's to begrudge him that?

Well, me, I guess. For Jaden is, in a word, terrible in this film. He's all gangly and awkward, looking somewhat like a lunatic while running Tom Cruise style, fingers pointed straight out, cutting the wind like scythes. Determined scenes of running aside, this is a kid who simply can't shoulder a film like this, even if there's so little plot to burden him with. It'd be laughable if it didn't come off as kind of sad, like watching someone flounder at a school production.

The story, if you still care, involves a spaceship that seems to be built out of spare insect parts that crash lands on an abandoned planet (one with apes, no less), and the injured father must send out his son to help recover a rescue beacon. Oh, and the key to battle the bad creature (which they happened to have been transporting) is to have no fear. Thus, we have a lead actor in Will Smith, talking in fleeting, mid-Atlantic accent, trying over Gopro footage and patchy Skype-like teleconferencing to tell his son what to do. All this while not emoting any sense of concern or fear.

Yes, it's as bad as it sounds. In fact, this film makes Oblivion (a movie I didn't hate) look like an unabashed masterpiece.

I'm guessing there are more heavy-handed uses of the Moby Dick metaphor on film, but I'm not sure I've seen any. Trading blowholes for CGI beasts, and making the harpoon a fancy form of lightsaber-like weapon, you half expect some sort of lecture about the nature of Cetacea, and, for our sins, we get that. We even get to see humpbacks in abundance in the human-free planet, reminding us that, hey, everything else would be just fine on terra firma without those damn meddling homo sapiens. Melville would be mortified.

And yet it's even more odd than that. It's as if Smith watched Lord of the Rings and thought, "hey, my kid could be Frodo!" We've got a giant eagle that does the deus ex machina thing in ways that'd make Tolkien blush. There's a Mordor-like quest as well, including a volcano, but this one naturally has hidden hydro-techtonic elements, meaning that there can be swimming inside an active volcano as well!

Oh, and the kid needs to use asthma-like inhalers or else he'll die, and he's got a magic suit that serves all kinds of purposes except keeping him warm when it gets cold.

So, yes, the film is as bad as you may have feared it to be. After Earth is so humourless, so devoid of any kind of creativity, that it's almost kind of sad to watch. It's a film that reminds you of sitting in a waiting room, a dull, non-kitschy kind of boredom. This isn't cool bad, or funny bad, or kitschy bad. No, this is just bad bad, and that's really not so much fun.

While this may not bring to an end Shyamalan's sorry career, and we're sure to see more of Mr. and Mr. Smith, what is likely is that this film will be lost to the sands of time, another blip in the summer schedule that will be quickly forgotten.

With this film, you'll spend much of your time waiting for it to be after After Earth, waiting for that respite brought about by the damn thing finally getting to its silly, telegraphed point.
After Earth opens wide in theaters across North America and other territories on Friday, May 31. Check local listings for more information, if you must.

Do you feel this content is inappropriate or infringes upon your rights? Click here to report it, or see our DMCA policy.
After EarthJaden SmithM. Night ShyamalanWill SmithGary WhittaSophie OkonedoZoë KravitzActionAdventureSci-Fi