Jason Gorber's Cineruminations: On Shyamalan, SHE'S ALL THAT and a Preponderance for Pigeonholing

Part of the (heated) discussion about my take on After Earth surrounded the dicey proposition, popularized by the "Cahiers du Cinema" crowd in the 50s, that a director's work is to be considered part of a continuous process of development, an oeuvre with authorial consistency.

Frank Zappa called it "conceptual continuity", and he applied it to everything - his music, his films, even his interviews were part of an aesthetic whole. This notion that each disparate piece gets added up to form some sort of aesthetic/biographic lump, a project/object, is made murky by the other factors at play in artistic expression. Foremost, of course, is the need for the average artist just to have food on the table (or, in the case of much of the history of Hollywood, copious amounts of cocaine piled on a mirror).

As such, it should come as no surprise that even the most pigeonholed of writer/directors sometimes have been associated with projects that may surprise. Francis Ford Coppola's stepping in to take over the truly egregious Supernova - in that context, he's doing something outside our usual comfort zone for FFC. Yet when the young filmmaker was bombing with Finian's Rainbow, who would have tasked him to craft the script for Patton?

As part of the conversation of cinema™, we lump these filmmakers in with what we're comfortable doing, while even more often the filmmakers themselves do much of that heavy lifting for us. Things stop being part of some authorial schema and simply become part of a string of redundancy.

There are of course exceptions -- some may claim that Wes Anderson's twee visions are variations on a theme, yet I'd argue they're of an aesthetic superiority to the usual grist that it's hard not to fall for the gems that he produces. The Coens often have a particular shtick, yet for every Fargo or Miller's Crossing, they do an O Brother Where Art Thou? or The Man Who Wasn't There to keep you guessing. That said, many were irritated with their take on the romcom in (the delightful) Intolerable Cruelty or their ambitious take on Ladykillers, pining for a more straightforwardly "Coeny" work to latch onto.

Think of films that Cronenberg has done that equally pushed at the boundaries of expectation with the likes of A Dangerous Method, or even Hitchock's foray into macabre comedy with The Trouble With Harry. Heck, while I can't claim to have read more than a spattering of works, the most enjoyment I ever had from a Stephen King novel was in the form of his fantasy work, The Eyes of the Dragon.

Debate shall continue to rage whether Mr. "Next Spielberg" Shyamalan deserves to be even talked about in the same way, but let's for now put aside charges of premature bestowing of auteur status. I already explained how I'd be at pains to find "signature" MNS elements in After Earth, but our Jim Tudor did a fine job in teasing out those elements that tie to a general sense of continuity. Without re-arguing the case, what remains for me remarkable about After Earth is how very unremarkable it is, and I for one would be hard-pressed to have pegged MNS over some made-for-TV director having assembled the dreary mess.

Which brings us to the revelation that Mr. Shyamalan has certain projects under his belt that do not conform nicely to the career arc that many have ascribed upon him. In an interview with Movies.com, a couple of weeks ago, the director admitted the following when asked about a "certain something" that audiences expected since his breakout hit:

"You're saying the audience's relationship started with me with The Sixth Sense. That same year I wrote Stuart Little. ... By the way, I ghost-wrote a movie that same year that would even add to the breadth of it all. ... I ghost-wrote the movie She's All That." 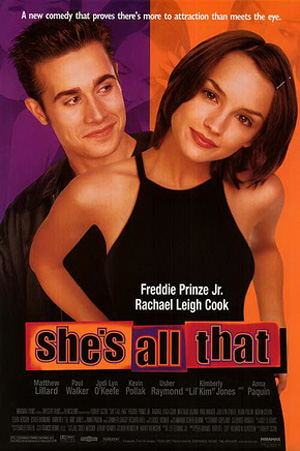 This revelation was recently quoted by Brit magazine NME, which has sparked the conversation anew, and it still strikes me as kind of awesome. It helps completely rewrite the skill-set of this filmmaker, and shows that he too can take the Pygmalion tale and set it a pre-millennium milieu, complete with a prancing Freddie Prinze Jr. and a precocious Rachael Leigh Cook. More importantly, it shows that when he was hungry, he'd write the films that people asked him to, and did so with a level of competency.

It should be noted that nobody has been clambering to make She's All That's director, Robert Iscove, into something he is not, not even here in his native Toronto (I think programming an Iscove retrospective at the Lightbox would be an interesting take, but I'll leave that to the professionals). We don't see "A Robert Iscove Film" emblazoned above the title on the poster, we don't rush to see Firestarter 2 or From Justin to Kelly because Iscove was on the director's chair. They're films, often forgettable ones, or at least films that fit a particular niche at a particular time, and may even make up their production budget.

Of course, the film has a screenwriter of record, one R. Lee Fleming, Jr. His only other theatrical credit seems to be 2001's Get Over It, a Midsummer Night's Dream-y teen musical starring Kirsten "I'd some day work with Von Trier" Dunst and Ben "I'd someday work with James Mangold" Foster. We have no indication that this film was doctored by Stanley Kubrick before he passed, but stranger things have happened.

So, while we may kind of scoff at the idea of MNS having done a bit of doctoring of a slight film from the 90s, it should be noted that that film was a box office giant. Costing around $10m, it went on to break $100m, not including video and other revenue streams. Given that After Earth will suck Sony to the tune of double that gross, maybe we should look to Shyamalan to not be looking to become the next Spielberg, but instead look to becoming the next Robert Iscove, making projects that make money for the studio without worrying so much about such things as "legacy".

Maybe this is a new start for Shyamalan, maybe it's not. As his own caché has lessened, maybe that will make him a more in demand screenwriter, polishing the Glee feature film, or tackling Jaden's inevitable foray into teen comedy. The biggest twist in his career is that maybe he's heading back to where he started, and maybe instead of schadenfreude we can instead not put quite as much effort into creating conceptual continuity as this director led us to believe was there under the rubric of a "M. Night Shyamalan" film.

Until then, I'm going to hope that we find out what happened to Zach and Lane a decade on, as She's All That 2: The Reckoning picks up a decade on, Before Midnight-style.

According to TheMarysue.com, TheDailyDot and alleged links from Twitter, R. Lee Fleming is claimed to have said:

The tweet, linked to here, is supposed to have said:

It should be noted that all three accounts (@jxmitchell, @nicolarz and @QualitShorts) no longer have a record of this conversation. The headline from The Daily Dot, calling Shyamalan a "liar", still stands.

Regardless, this brings up a couple points still very much relevant to my article above

- Credited writers are often loathe to admit they've had their work altered. In fact, given the usual process of back-and-forth "notes" from producers or the director, it's entirely possible that Fleming saw versions of the script with revisions that were never officially credited to the then relatively unknown MNS.

- Twitter is great, but these now deleted tweets are hardly definitive proof one way or another. Given the usual Hollywood reticence to admit to such "slumming", admitting to writing that project is actually more daring than not saying anything at all. It's was meant by MNS to challenge preconceptions we have about what he's capable of writing. It would be odd to pull that film out of many to claim to have written if he hadn't helped with it - after all, why not claim to have taken a pass on 10 Things I Hate About You if he was looking for some 1999-era street cred?

- Regardless of the did he/didn't he, the point stands - the "brand" of M. Night Shyamalan that had been carefully cultivated since that fateful year of both The Sixth Sense and She's All That has faded quickly. MNS can't party any longer like it's 1999, but perhaps he can find a way to become relevant again in this changing cinema landscape.

Do you feel this content is inappropriate or infringes upon your rights? Click here to report it, or see our DMCA policy.
M. Night ShyamalanGary WhittaWill SmithJaden SmithSophie OkonedoZoë KravitzActionAdventureSci-Fi