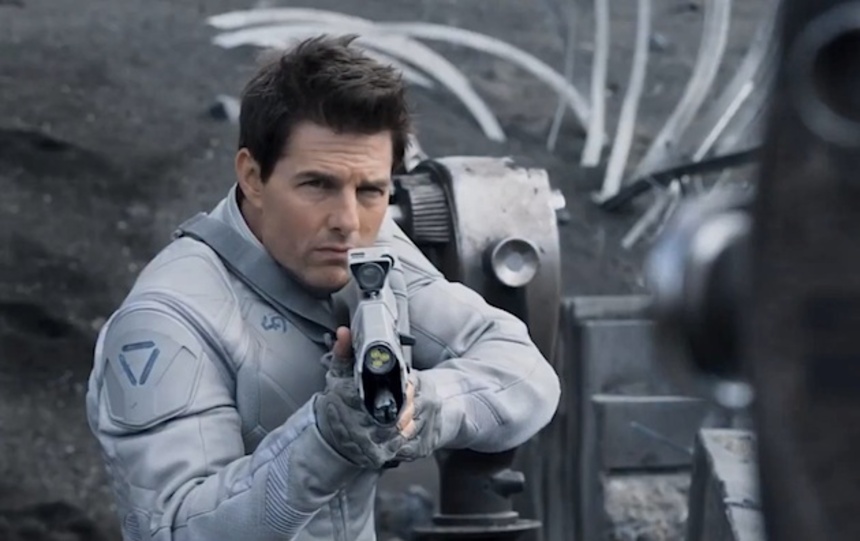 It was a close battle for first place this weekend but it one of the most world's reliable box office properties won out in the end. Admissions stayed flat with both last week and last year at 1.55 million. Despite two Hollywood blockbusters in the top 4, the local market still dominated with 55% of all sales.

Tom Cruise demonstrated his box office clout yet again by opening first with 530,042 tickets sold, despite going against a major new local film with a similar demographic. Though Cruise's star has weakened slightly at the US box office, his international drawing power is seeing no signs of slowing down as the sci-fi Oblivion opened to big numbers in an array of markets a week ahead of its US bow. However, word of mouth may be a bit muted on the pic and it may fall about 60% next weekend, much like Cruise's Jack Reacher did earlier this year.
Underwhelming in its debut was Fists of Legend, which only managed to draw in 478,858 spectators. Kang Woo-suk's male-oriented MMA flick is based on a popular webcomic and stars Hwang Jeong-min (New World), Yu Jun-sang (In Another Country) and Yoon Je-moon (Dangerously Excited). Director Kang has been a reliable hitmaker since Two Cops in the early nineties, but his most recent films have been exhibiting increasingly diminishing returns.
Dropping to number 3 was the Shin Ha-gyun (Save the Green Planet) action vehicle Running Man, notable for being the first Korean film entirely bankrolled by a Hollywood outfit, in this case 20th Century Fox. After a decent start, poor word of mouth has kicked in, halving the film's returns, as it could muster only 252,122 admissions in it sophomore frame. It has crossed 1 million but additional milestones seem unlikely.
G.I. Joe: Retaliation, starring local hitmaker Lee Byung-hun (A Bittersweet Life), fell hard in its third weekend bringing in an additional 103,867 viewers. However, with almost 2 million admissions recorded so far, the film has performed within expectations.
The Kim Min-hee (Helpless) and Lee Min-ki (Quick) romantic drama Very Ordinary Couple also took a fall this weekend after collecting another 69,005 spectators as it shuffles out of theaters. The well-received film has made it close to the 2 million mark, a strong result.
Further down the chart, the popular indie Jiseul crossed the 100,000 mark on Friday, a rare feat for such a small film.
Next week will see the release of the controversial local film Norigae, which takes aim at sexual abuse within the industry. Though visibility is high, it is unclear how wide the film will open. Regardless, I am particularly curious to see how this performs. While I can't speak to its long-term chances, if it opens on a decent number of screens it should be in for a solid start, much like the similarly themed Silenced and Don't Cry Mommy, which have performed will recently. Azooma, another sex abuse film, will also be opening, though likely in limited release.
Tweet Post Submit

Do you feel this content is inappropriate or infringes upon your rights? Click here to report it, or see our DMCA policy.
Meul OMin-chul SungJung-won YangYoung-soon OhSuk-bum MoonDramaHistoryWar