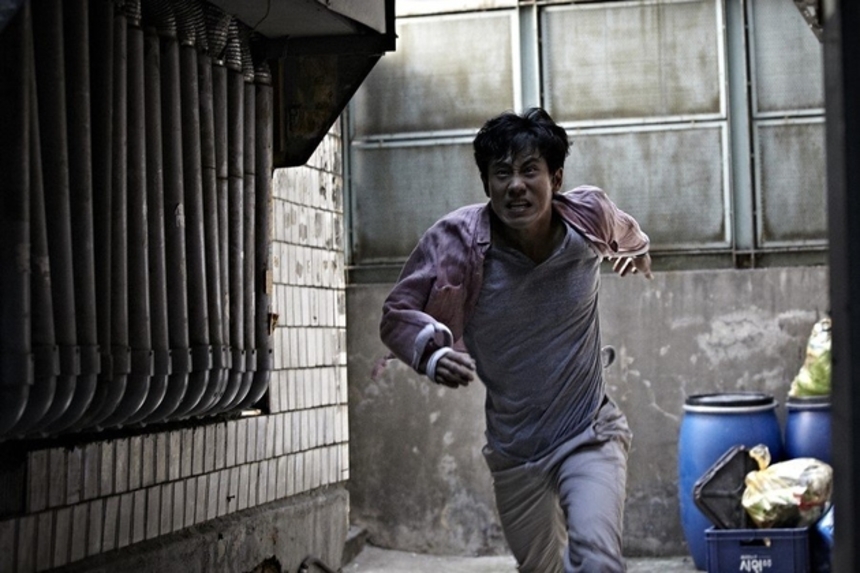 Business remained on par with last year in the slow spring season as theaters sold just over 1.6 million tickets. With only one significant foreign film making an impact at the Korean box office, the local market share stood at 60%, half of which came from the frame's big new release.

This week's no.1 is noteworthy due to it being the first Korean film fully financed by a Hollywood studio, further blurring the lines of national Cinema in a time when co-productions are quickly becoming the norm. Fox International Productions' Running Man, starring Shin Ha-gyun (Save the Green Planet) barely eked out a victory with 501,908 admissions, a solid if unremarkable start for a high profile action pic. As with most Korean films, word of mouth will be crucial to ensure success. Critics have not been kind, but the buzz from the public has been decent and may be enough to see the film through to a small profit. However, it faces direct local competition next week.
Following a strong start, G.I. Joe 2, featuring local megastar Lee Byung-hun (A Bittersweet Life), fell just 35% for 464,617. A soft slide for a foreign action film and all the more surprising given the competition that stole its top spot this week. It will probably see a sharper fall next weekend but it will easily make it over the 2 million mark.
The well-received romance Very Ordinary Couple, starring Kim Min-hee (Helpless) and Lee Min-ki (Quick), tumbled 42% to 206,164 and may have missed its chance at getting over the 2 million milestone, though it has still had a respectable run.
The Han Suk-kyu (The Berlin File) and Lee Je-hoon (The Front Line) dramatic vehicle My Paparotti took in 146,450 following a 38% decline and is also unlikely to reach a second milestone.
Gang pic New World, featuring a lot of star wattage in the form of Lee Jeon-jae (The Thieves), Choi Min-sik (Oldboy) and Hwang Jeong-min (The Unjust), brought in another 62,591 as it quietly finishes its run. With 4.6 million admissions and counting, it's one of 2013's biggest hits to date.
Opening at no.10 was Min Kyu-dong's In the End Is My Beginning, starring Uhm Jeong-hwa (Dancing Queen) and Hwang Jeong-min with a paltry 20,416. Granted the film is actually from 2009 and merely the feature-length version of a short that appeared in omnibus Five Senses of Eros.
Next week features yet another Hwang Jeong-min film in the form of testosterone-fueled Kwang Woo-suk MMA flick Fists of Legend. The CJ film will be looking for a big start. Also debuting will be the US sci-fi action thriller Oblivion, starring Tom Cruise.
Tweet Post Submit