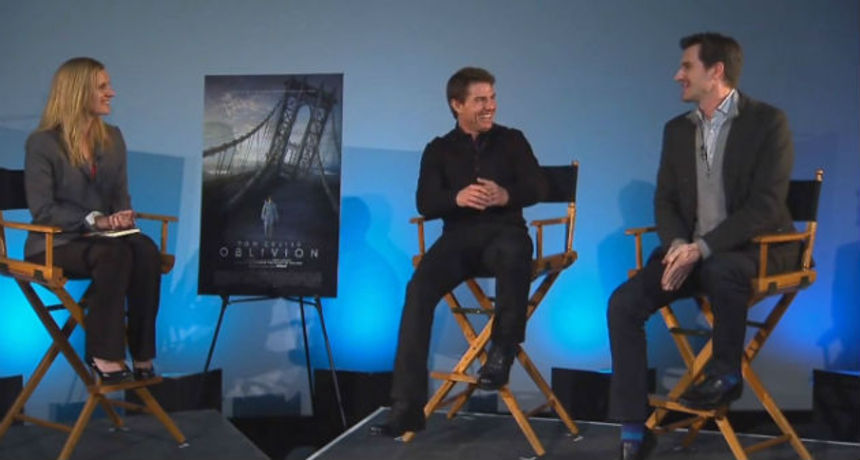 Cruise and director Joseph Kosinski participated in a question-and-answer session after a screening of Oblivion in New York last night that was broadcast live via satellite to nine other cities in the U.S. and was also available on the internet, as part of the Los Angeles Times Hero Complex screening series. Rebecca Keegan hosted, with the majority of the questions arriving via Twitter.

Oblivion looks and sounds spectacular in a giant-sized IMAX theater, and the packed auditorium 'oohed' and 'aahed' in all the right places. Whatever else its merits as a film, Oblivion satisfies as a visual and aural treat. The official statement for the screening included the following note:


The IMAX presentation of Oblivion has been specially formatted to feature a larger aspect ratio than the conventional release for the entirety of the film. Exclusively in IMAX, this aspect ratio has been optimized to take advantage of the IMAX screen, allowing audiences to see more of the image and result in a full panorama of the action - further immersing them into the vast scale and scope of the film.

The Dallas screening was held at the Cinemark 17 IMAX, one of the few giant-sized IMAX theaters, as opposed to the smaller-sized IMAX auditoriums. And while Oblivion was not shot with IMAX cameras, as were portions of The Dark Knight, Mission: Impossible - Ghost Protocol, and The Dark Knight Rises (as well as the upcoming Star Trek Into Darkness), the conversion process certainly looks splendid.

Since The Dark Knight in 2008, local press screenings for post-converted "IMAX" films have been held in smaller IMAX auditoriums, and I hadn't felt been compelled to lay out the cash to see those titles again, but Oblivion makes a good argument for doing so. At least, for those relatively few films that I really, really enjoy and want to see again in a theater, and am willing to pay up to $17.50 (?!) to buy a ticket. (The upcharge at AMC Theatres, which has smaller IMAX theatres, is $6.00, as opposed to $2.00 at the Cinemark giant-sized theatre. Go figure.)

Watching Cruise and Kosinski handle the Q&A was a reminder that they've been on the promotional circuit for a while; there are few questions they haven't heard, especially when the carefully-selected queries come from eager fans. (The film opened in 52 territories last weekend, and has already pulled in more than $60 million, according to The Hollywood Reporter.) 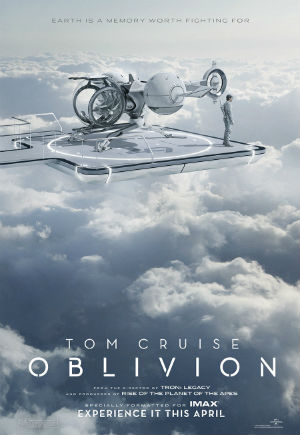 Responding to a question from Keegan, Cruise pushed the idea of seeing the film a second time in order to appreciate fully it. "You need a two-pass," he said, a term I don't remember hearing before. The Twitter questions asked about everything from Cruise's interest in the script -- he liked the "Rod Serling twists" -- to shooting on location during the summer in Iceland -- "It's a great place to go. If you ever get the chance to go to Iceland, I highly recommend it."

Cruise praised Kosinski's desire to bring realism to the film by traveling to Hawaii to shoot sunsets that would show in the background of the "mile high" sky tower that serves as home for Cruise's character. He also said he liked working with Kosinski because "he doesn't know how ambitious he is." Kosinski noted that he was listening to M83, among others, while first working on the script eight years ago.

As to why he's attracted to science fiction, Cruise said it's because of its capacity for taking people to another place; Oblivion, he felt, is "earthbound science fiction ... in the same vein as Minority Report." He repeated his contention that Minority Report influenced Steve Jobs to create the iPad, and expressed his wish that someone would be moved to create the swimming pool depicted in the film, which hangs below the sky tower.

Pressed to name his favorite science-fiction movies, Cruise hesitated before finally listing Star Wars, Ridley Scott's films such as Alien ("you could watch that for days") and "the one with Harrison Ford" (Kosinski helpfully supplied the title). Kosinski recounted the joys of Cruise's home theater set-up, where Cruise says he has "thousands" of films he can call up at the press of a button, and they could take a break and watch Mad Max for a couple of hours and then get back to work.

As to superhero films, Cruise says he has yet to find one he wants to do. Asked what it would take to get him to make one, he admitted. "I don't know!" and then added that he'd have to be able to fly and have "force fields."

Getting back to the most frightening moment on set, the one that scared him "shitless," Cruise recalled how actress Olga Kurylenko had assured him and Kosinski that she was a motorcyle rider, so it was assumed that the scenes in which Cruise would be gunning a bike across the Icelandic flats at high speeds with her as a passenger wouldn't be an issue.

On the day of shooting, however, with Cruise roaring at 70 miles per hour with Kosinski following closely behind in a helicopter filming the action, Kurylenko evidently got unnerved as they started hitting bumps in the flats.

Cruise had told her, "All you need to do is hang onto me. It may seem like we're going down as I make adjustments, but don't worry, I've got it." But she cried out, "go slower," even as Cruise was hearing "go faster" from Kosinski in his earpiece.

Cruise tried to go slower but he knew the scene -- the movie! -- needed him to go faster, so he did, and Kurylenko let go of him and began grabbing the handlebars of the motorcyle, as Cruise struggled to control the bike. She apologized: "I don't mean to do this!" but she couldn't help herself. Cruise says he was forced to keep hitting her hands away from the handlebars so he could control the motorcyle.

He says the scene "scared me to death." But his greater concern was that the audience might be able to see that he kept letting go of the handlebars and swatting her hands away, thus ruining the scene.

Which may help explain why he's still one of the most sought-after movie stars in the world.

Hollywood Beat is a column on the film and TV industry. Oblivion opens in IMAX and other theaters in North America and other territories on April 19.