TTTT: Cruise at Earth's End: Watch it Spin Round to a Beautiful Oblivion

Jim Tudor
Featured Critic; St. Louis, MO
Tweet Post Submit
Hey, it's another TTTT column, where I, Jim Tudor, take you along on one of Tudor's Twitchin' Travel Tours! For this one, we leave the planet via bubbleship, only to return to to find it an abandoned post-apocalyptic wreck. That's right, I saw Oblivion. Here are a few of my thoughts on it: 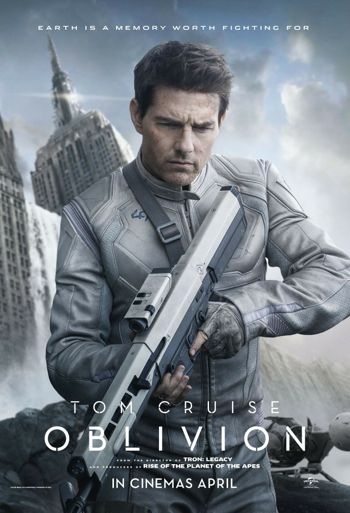 When the rock band Eve 6 sang of spinning "'round to a beautiful oblivion" in the late 1990s hit song "Inside Out," the reference was to a heart in a blender. As kinda grotesque as that imagery is, the emotional turmoil it's meant to evoke is entirely relatable to many of us in the past decade-plus. The intensity of darkness, dread and lament in popular culture has only been increasingly reflective of the world's self-mindset since that song hit airwaves. Downright apocalyptic tension has flavored everything, sparked by a deluge of frightening real-life global game changers such as the global wars on terror, the vast decline of national economies, and the recent "Arab spring" revolutions. Factor in a few major natural disasters, and the illusion of human control becomes even more of a façade, an oblivion getting less beautiful all the time.

Yet, amid all of this, we are fed repeated and varied messages of hope and perseverance, some bearing re-assuring gravity and meaning, but much of them not. In the meantime, technology ramps up and our own external lives and identities dwindle. Virtual life and actual memories blur, at best leading to questions of which images in our minds are real and which aren't. And then more dread, this time concerning our own ingrained cultural and familial promises of "specialness." "Was it all a lie? Do I really not matter after all?" The past decade was perhaps as close as Hollywood ever got to blatantly asking such troubling but vital questions.

But the dark-night-of-the-soul trend in cinema (from the oil-fueled greed in There Will Be Blood to the experience of doomsday in Melancholia) might be in the rear-view mirror. (The question is, should it be?) Somewhere between Hollywood's never ending need to dish up happy endings and positive spins, and the increasingly palpable perception that perhaps the worst of it is behind us for now, the method in which the silver screen currently reflects these tensions has shifted for the moment. The End of the World is still central to the conversation, but in films like Oblivion, the upcoming After Earth, and even the animated The Croods, its suddenly become past tense. It's as though the worst is behind us. So then... now what?

This is the jumping-off point for the new big budget effects-driven Tom Cruise film, Oblivion, directed by Joseph Kosinski, the former architect who debuted a few years ago with Tron: Legacy. That film (which Kosinski is said to have pre-planned using AutoCAD) pretty much feels like a movie that was directed by an architect. Oblivion, based on Kosinski's own graphic novel project, follows suit one hundred percent, but as an even better funded Cruise vehicle.

Cruise plays a character named Jack for the second movie in a row, third if you count Rock of Ages' Stacee Jaxx. Having risen to apparently irrevocable power in the "me decade" 1980s, the gifted Cruise has seized on a formula of infusing every role with a certain air of entitled specialness. For many, his trademark Cheshire cat self-assurance - always being the best at his character's job - has turned on him as of late, proven anathema to his public image since the mid 1990s. (Consequently, he spent a rash of movies in this period hiding his previously lusted-after face behind masks.) In the 80s, when everyone fancied himself a master of the universe, this self-confident can-do hotshot persona fit the culture to a tee, propelling Cruise to international superstardom. The fact that even in this very different day and age that Cruise remains a superstar capable of getting a project like this greenlit to the tune of hundreds of millions of dollars is a testament to his own proven natural abilities and his knack for selecting surefire powerhouse directors to work with. Like him or not, his movies do tend to be good. Oblivion, unfortunately, isn't one of those movies.

Oblivion takes place in a not-to0-distant future, when Earth has been abandoned by humanity following a deadly attack that destroyed the moon. (Its crumbling chunks hang in the night sky, all picturesque.) Jack's job takes him to the desolate surface on a regular basis, accompanied by flying armed mechanical drones. (Clearly, the future powers-that-be have become no less drone-happy than the present day ones.) He's haunted by images of a mystery woman, a lover, in modern day New York City. This is a time and place he has no right to remember, considering the disaster predates his birth. So how are these memories so real? And who is that woman, anyway? (Other than rising starlet Olga Kurylenko, currently also in Terrence Malick's To The Wonder.) 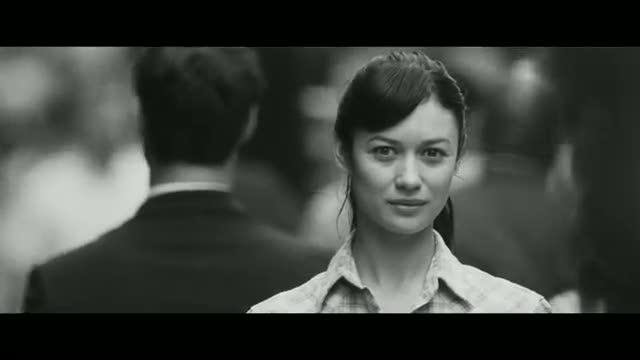 Oblivion uses every shorthand technique (betraying the serious themes on the table) to demonstrate that Jack is a good person: When he flies, he interacts with an Elvis bobble head on his dashboard. When he lands, he always puts on a trusty old New York Yankees ball cap. He's even secretly carved out a small niche of paradise to take solace in: A rustic cabin near a lake, housed in one of the last fields of green the planet has to offer. His music of choice is time-tested classic rock (and not the tired, worn out tripe): Led Zeppelin and Procol Harum (although no one apparently told him that "A Whiter Shade of Pale" will always be cinematically owned by Scorsese, who made unforgettable use of it in his short "Life Lessons"), played on vinyl, of course. He loves to go off the grid and lie in the grass and dream of days gone by. Of course, this sort of behavior can only instill panic in everyone else whose job it is to keep tabs on him, but as he might say, "screw them."

Oblivion sets out to be full of emotional longing, nostalgia, and regret (the heart in a blender) for the natural world we've somehow forsaken to technology. But that doesn't take. The only thing truly spinning 'round in the movie is Cruise's overly designed gyroscopic helo-pod flying vehicle. It's a prominent element that says more about the filmmakers scraping the bottom of the spaceship-design barrel than about the technology of the world within the film. To launch, the thing spring-bounds in a 180 degree flip off its floating landing platform; its spinning gyro-cockpit and rotating round engines indicating no clear top or bottom or front or back. It does in fact have those things, but nonetheless, there's an unintentional goofiness and a forced quality to this would-be sleek flier that informs the entire rest of the movie.

The sky platform headquarters in which Jack and his love interest/partner operate is like a cross between an Apple store and some sort of futuristic health spa. Andrea Riseborough is Victoria, Jack's red haired better half in a couple that is more of an "effective team" than soul mates. For the first half of the film, her character exists to love on Cruise, swim naked with him (but without "nudity," mind you; this is pure Bond-movie style female body admiration), and then spend tons of time thanklessly tethered alone to a communications control panel (the most boring scenes for an actor to shoot) while he's off having his numerous adventures on the blown up surface of Earth. We're only supposed to have so much sympathy for Victoria, who refuses to visit the planet with him and even fears it, but their dynamic is more of an unintentional commentary on the contemporary household professional hierarchy: Man gets a career in the exciting world, woman is stuck inside with the mundane tasks.

The late 1990s are of course a memory, and Tom Cruise is no longer wearing masks in every film. He is still very interested in exploiting his stardom and the formula that forged it to make interesting and worthwhile films, and kudos to him for once again attempting something resembling heady sci-fi. But Oblivion is a missed opportunity, failing to spin our emotions or put our hearts in the blender. We're supposed to be engaged by this film, to come away talking about it and looking to download the M83 soundtrack. But it's Oblivion itself that's already becoming a hazy memory of eye candy for this reviewer (ala so many movies). To quote the song one more time, "Rendezvous, then I'm through with you."
Tweet Post Submit