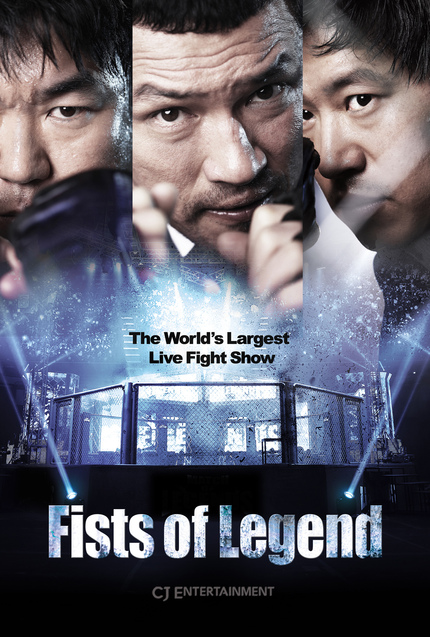 UPDATED: The people at CJ have kindly sent us an exclusive english-subbed teaser trailer and poster. Check out the embed below!

The upcoming Korean MMA flick Fists of Legend is set to get in the ring with US audiences April 12, according to distributor CJ entertainment. That's only two days after its domestic Korean bow, though it will be a limited run with bookings currently confirmed for New York (AMC Empire, AMC Bay Terrace), New Jersey (AMC Ridgefield Park), Philadelphia (AMC Plymouth Meeting), Atlanta, Dallas, Houston, Los Angeles, Las Vegas, and Seattle.

Fists of Legend is the new film from director Kang Woo-suk (Two Cops, Public Enemy, Moss), perhaps the most virile and masculine of Korean filmmakers who has been delivering testosterone-fueled fare since the early 1990s. Though never subtle and frequently light on story, Kang's films are among Korea's best commercial works. The most exciting things about his new feature are the casting of the excellent Hwang Jeong-min (The Unjust, New World) and the choreography from Korea's stunt legend Jung Doo-hong (A Bittersweet Life, The Berlin File, G.I. Joe: Retaliation).

Here's the official synopsis from CJ:

Based on the Korean web comic Legendary Fist, FISTS OF LEGEND features three old friends and rivals from high school days who get their invitation to the big fight for the chance to win $200,000 and much more. 25 years later. Deok-kyu, whose Olympic dreams were dashed, now runs a struggling noodle shop. Jae-seok who always wanted to be number one but still finds himself in a third-rate gang. And Sang-hoon, a thug turned corporate executive who must go back and find his bloodlust one last time.