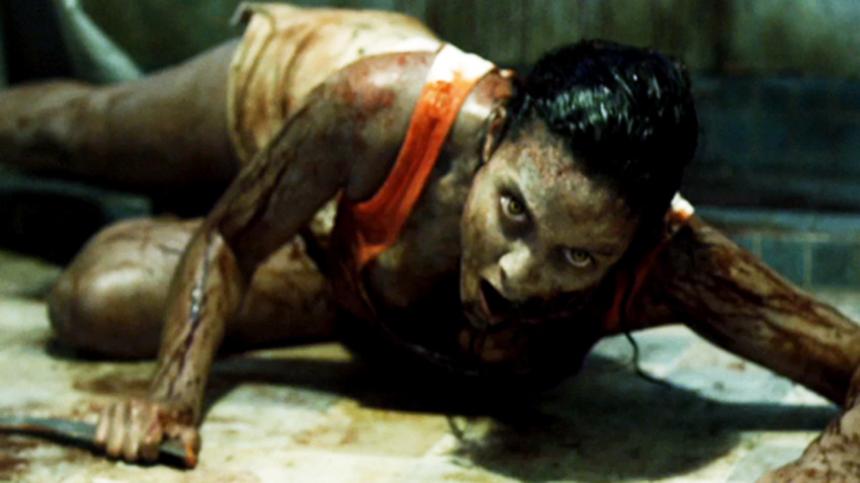 There is a moment in Fede Alvarez's article-less remake of The Evil Dead that offers a hint of the condescension to come; an utter lack of faith in the audience or a confidence crisis in storytelling.  After a mishandled prologue involving the exorcism of a dead-ite girl in the basement filled with more cat corpses and mutant hillbillies than Sleepwalkers and The Hills Have Eyes combined, our younger, prettier, twentysomethings come to the cabin in the woods to become, as they say, "spam in a cabin."
As our own John Jarzemsky acknowledged in his review from SXSW last month, "the script is probably the weakest point of Evil Dead."

Writer/director [Fede] Alvarez's dialogue "is excessively utilitarian and on the nose," John wrote, "a problem exacerbated by mostly wooden performances from the film's cast, at least before things really get cooking. ... Alvarez tends to err on the side of too much information at various points in the movie, and the explanations that are proffered for the demonic goings-on are satisfactory, but a tad unnecessary."

From there our thoughts on the film diverge. The prologue thoroughly unnecessary because less than fifteen minutes after an interminable stretch of graceless character building and (forgive me) soul sucking serio-tragic exposition, the characters find themselves down in the burned out foundation, dead kitties still hanging from the charred joists.  The storytelling issue:  This is when the editing geniuses behind the film feel the need to flash back to said prologue with a purpose to remind us that, an 'evil dead' thing, not too long ago, was going on in this creepy woodland cottage.  Have a little faith in your audience, movie editors.
More seriously, as a point of difference, John observed:

Evil Dead, whatever its failings in the story department, delivers above and beyond expectations in the realm of the visceral. There is a dedication to unpleasantness present in this film that surpasses most horror flicks in recent memory, a firm commitment to brutality that is as impressive as it is disturbing.

What makes the remake half-a-movie at best, is that it is merely an engine for gore. Painful, quite realistic gore. A wet-dream for those who look for this type of thing, that somehow survived NC-17 censorship. Tree rape and limb-severings aplenty are done so with effects that slickly combine old-school practical and modern digital craft. So much time is spent getting rusty nails propelled into arms and faces that the filmmakers forgot to make it riveting (sorry) in any other way. If onscreen suffering floats your boat, and you've not tired of the Torture Porn cycle that I thought was well behind us at this point, then this is the horror film for you. Ultimately, Evil Dead is not scary, or even interesting.
While I do think that excess is the name of the game in these films, and that is not a problem per se. What was the original if not the combination of the Friday the 13th slasher mixed with the highlight reel of all The Exorcist pea-soup moments shaken and cooked into a high energy speedball of manic-camerawork? It worked as slapstick, it worked as frightening hallucination.  The reveal of the Necronomicon, the evil book that releases demons into the world, is a telling example of excess done wrong to the point of exaustion.  Here it is not only fully annotated in large, bloody english Cliff-Notes over the ancient text, but also, far more insultingly, the book has a handy-dandy series of pictures to explain things after each scene and to tell the audience what is going to happen next.  If Alvarez is aiming satire of the excesses of Raimi's original trilogy (Dead By Dawn is itself a parody-laced remake-slash-continuation of sorts - if you don't know, don't ask) the he is of the most subtlest sort.  (Hint:  This is not the case)
Alvarez and co-writers Rodo Sayagues, with script-polisher Diablo Cody, are utter slaves to burying references and Evil Easter Eggs from the original trilogy that things threaten to make this film more of a distracting dialogue with what came before, not to mention rather unsuccessful games of bait-and-switch in the screenplay.  "The Classic" Delta 88 Oldsmobile, the charming rustbucket of a vehicle which takes on an increasing significance in the original films, shows up here not as an old clunker, but more a piece of impostor art object to be used as pretty object for our pretty actress to sit upon.  I single out the remade car not as a miffed Raimi fanboy (of which I assure you, after a few too many Spiderman flicks and Disney Oz prequels, I am not) but rather that an ill executed homage such as this is indicative of the whole enterprise.  But wait, there is more.  At the other end of the pander-spectrum are things of such pathological minutiae that I am kind of embarrassed to know of their existence at all,  such a necklace chain sculpted into the shape of skull (again don't ask - it is not really that important.)
There is a genuine intent here to make you care about the characters. It simply fails. A fresh-faced school teacher and his friends help their junkie pal Mia in detox from a heroin addiction. They pull in Mia's long-absent brother (and his nursing student girlfriend) to help provide further emotional and medical support. Yes, this handily provides a reason why these callow young things might linger longer than is wise after our downy-bearded teacher reads the Shaitan-book and Mia starts coughing up blood. It provides a reason why they might be inclined to hurl super-strong and pupil-dilated Mia into the basement and let her rot in her own juices.
But the addiction thread is completely dropped after so much agonizing set-up. A better movie might have found a way to tie in the drugs and the noble intentions with the demonic proceeds happening in the dark forest. Hell, with a remake in a sub-genre that saw two significantly ambitious entries last year, let's agree it is kind of necessary. I was not a fan of Cabin in the Woods for dropping any pretense of actual horror in order to comically deconstruct horror films. Joss Whedon, Drew Goddard and company at least had an idea for their film for which they committed to fully. They did not drop the storytelling or semblance of character at the first opportunity to break out the Karo syrup. Justin Benson and Aaron Moorhead's Resolution, which somehow was even more meta, takes the notion of narrative (and found footage) and seamlessly blends it with a detox-in-the-woods story that makes anything (outside the torture) in Evil Dead  feel embarrassingly amateur hour.

In his review, my colleague John concluded:

Evil Dead succeeds as a horror film because of its unwavering dedication to the hopeless and devastating violence of its own world. There are moments of sly (and not so sly) fan service that will have devotees of Raimi's original film cheering in the seats, but Alvarez takes great care to never break character, and his film refuses to wink or otherwise draw the audience into a safe place where they are free to distance themselves from the horror unfolding onscreen. Evil Dead is a cruel, nasty, and horrifying piece of cinema, and is as good a horror remake as has existed in the past decade.

To the contrary, any semblance of nihilism that one might be inclined to award some credit to, the 'horror should be soul crushingly horrific' idea, is disingenuous here because it is catering to a bloodthirsty crowd who are fine with a polished slaughter. And, if I may hazard a guess, probably don't get much 'horror' out of it, only simple entertainment.
All the slick lighting, framing and meticulous craft in the destruction of the human body is enough to swallow your horror-loving soul in the same way junk food offers instant gratification, only to be followed by a sore teeth and an empty stomach: It's a trick, get some snacks.