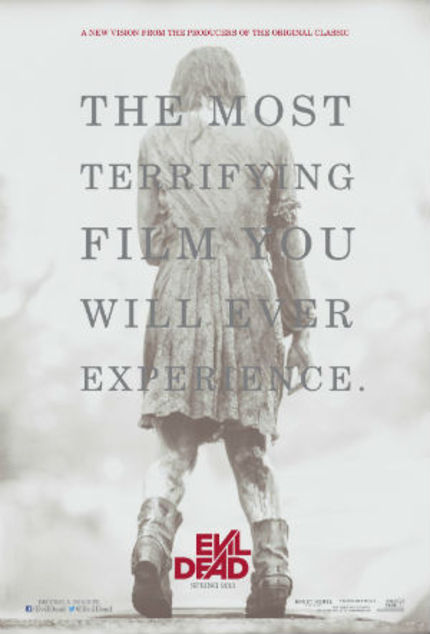 This is not a review of an old movie. Yes, Fede Alvarez clearly owes a great deal to horror maestro Sam Raimi, who penned and directed the original The Evil Dead back in 1981, and yes, Alvarez's film is a loving and studious homage. Nonetheless, the Evil Dead of 2013 is a horse of a different stripe, if not necessarily a different color.

After one of the more cleverly executed pre-credits sequences I've seen in years, the proper meat of the story begins as a motley crew of young people gathers in a remote cabin out in the wilderness, as Mia (Jane Levy) throws her stash of drugs down an old well, beginning a cold turkey stint with the aid of her brother David (Shiloh Fernandez), his girlfriend Natalie (Elizabeth Blackmore), and their friends Olivia (Jessica Lucas) and Eric (Lou Taylor Pucci).

Through some rather clunky expository dialogue, we're informed that Mia has done this song and dance before, and that David hasn't always been this ready to support her. As predicted, Mia begins to freak out, complaining of a smell that is eventually traced to a secret chamber underneath the cabin's floorboards...one that houses a multitude of dead animal carcasses and a mysterious tome wrapped in barbed wire. Eric, the resident brain, takes it upon himself to open the book and begin exploring its contents, which, as anyone familiar with the series knows, only spells disaster for those poor souls out in the woods.

Without delving too deeply into spoiler territory, the script is probably the weakest point of Evil Dead. Alvarez's dialogue is excessively utilitarian and on the nose, a problem exacerbated by mostly wooden performances from the film's cast, at least before things really get cooking. Framing the entire experience of Evil Dead with Mia's addiction is an interesting touch, but it's never quite mined to its full potential. Alvarez tends to err on the side of too much information at various points in the movie, and the explanations that are prorfered for the demonic goings-on are satisfactory, but a tad unnecessary. The greatest strength of Evil Dead, and perhaps of the horror genre in general, is its exploitation of man's inherent fear of the unexplainable, and when characters stop playing detective and begin playing victim, the pleasure of the experience increases markedly.

"Pleasure" may be an odd word to describe what's going on in this film, but true horror, and in particular, gore aficionados will find a lot to love in Evil Dead. The poster tagline promises "the most terrifying film you will ever experience," and while the marketing department may have been acceptably hyperbolic in this particular instance, Alvarez's ability to cajole, shock, and play with expectations yields remarkable results. Modern horror films, and especially high-profile remakes of beloved franchises, tend to falter without a firm commitment to the fear they are attempting to instill. Evil Dead, whatever its failings in the story department, delivers above and beyond expectations in the realm of the visceral. There is a dedication to unpleasantness present in this film that surpasses most horror flicks in recent memory, a firm commitment to brutality that is as impressive as it is disturbing.

The stark contrast between performances before and after the initial possession occurs is enough to make me wonder if Alvarez intentionally directed his actors to a more bland route during expository downtime in order to make the naked, animal fear on display during the action all the more compelling. The increasing escalation and tension is aided by some superb visual effects and near flawless sound design that drives home every bump, scream, and splatter with pinpoint accuracy. The visual style is also an intriguing departure from the standard fare of modern re-imaginings. Evil Dead drops the drab monotones of its peers and embraces a variety of palettes, equally as comfortable in near-total darkness as a torrential downpour of blood, lit by demonic flames.

Ultimately, Evil Dead succeeds as a horror film because of its unwavering dedication to the hopeless and devastating violence of its own world. There are moments of sly (and not so sly) fan service that will have devotees of Raimi's original film cheering in the seats, but Alvarez takes great care to never break character, and his film refuses to wink or otherwise draw the audience into a safe place where they are free to distance themselves from the horror unfolding onscreen. Evil Dead is a cruel, nasty, and horrifying piece of cinema, and is as good a horror remake as has existed in the past decade.

The film enjoyed its world premiere at SXSW last night. It opens in wide release across North America on April 5, 2013.

Do you feel this content is inappropriate or infringes upon your rights? Click here to report it, or see our DMCA policy.
Fede AlvarezJane LevySam RaimiRodo SayaguesSam Raimi (based on the motion picture "The Evil Dead" written by)Shiloh FernandezLou Taylor PucciJessica LucasHorror