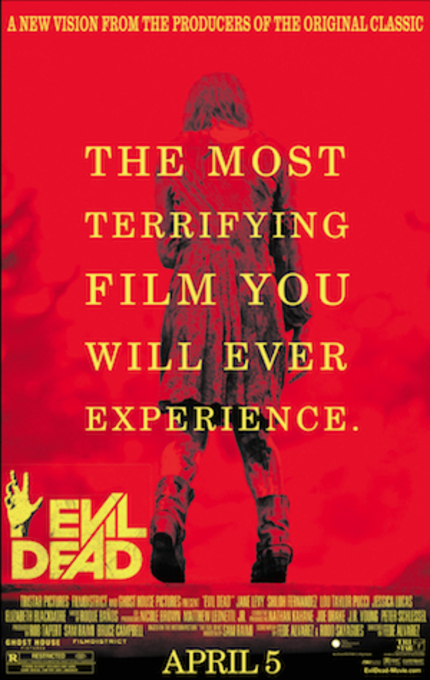 Hey Friends in the Five Burroughs, ScreenAnarchy has got 25 passes to giveaway to an advance screening of Fede Alvarez's (but Sam Raimi produced ad approved) new take on Evil Dead, this coming Tuesday April 2nd at a NYC area theater. You in? Then head on over to Gofobo.com and in the RSVP field enter the following code:

You'll be prompted to leave your name and contact info. Do this by Saturday, the 30th, and on Sunday, the 31st, 25 winners will be randomly selected by some new fangled digital algorithm or some such trick of infernal machinery and then notified. So, that's it. Easy for us, easy for you, with a bitchin' time at the movies is in store. Oh, and by the way, for those winners who want to go the extra step, if you come dressed to the screening as your favorite Evil Dead character, you'll have a chance to win a special prize -- so show off your boomsticks with pride, compadres. In the meanwhile, get acquainted with the trailer and mosey on over to the film's site below.

In the much anticipated remake of the 1981 cult-hit horror film, five twenty-something friends become holed up in a remote cabin.  When they discover a Book of the Dead, they unwittingly summon up dormant demons living in the nearby woods, which possess the youngsters in succession until only one is left intact to fight for survival.

Do you feel this content is inappropriate or infringes upon your rights? Click here to report it, or see our DMCA policy.
evil deadFede AlvarezHorrorJane Levysam raimiRodo SayaguesSam Raimi (based on the motion picture "The Evil Dead" written by)Shiloh FernandezLou Taylor PucciJessica Lucas