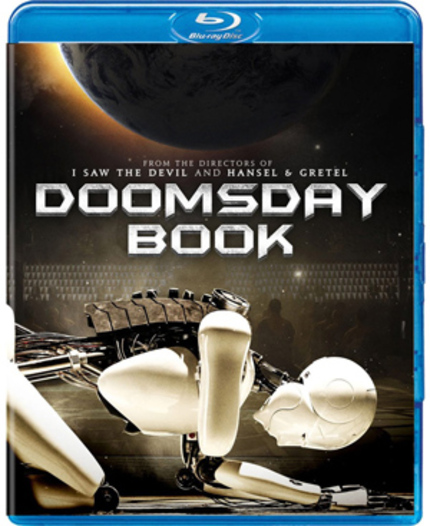 You'll be seeing several of these cram sessions from me as I catch up from a particularly eventful winter during which I was unable to maintain my preferred review schedule. Hopefully these wrap-ups will be useful as I can help you decide what is worth your money and what isn't.

Well Go USA is one of the more prolific labels with whom I deal on a regular basis. In the last two months, they've dropped some major releases on us, including their theatrical/Blu-ray release of Stephen Fung's steampunk kung-fu epic, Tai Chi Zero; and Korean box office explosion, The Thieves, among others. Here are a few words about each of their recent releases from our archival reviews:

Doomsday Book:
This apocalyptic triptych is the joint work of Korean directors Im Pil-sung (Antarctic Journal, Hansel & Gretel) and Kim Jee-woon (I Saw the Devil, A Tale of Two Sisters, The Last Stand). The three pieces share little more than the theme of the end of the world, however, the individual pieces still work somehow. The film is thematically uneven, and tonally atonal, but seen as a series of unconnected shorts, it works alright. I think that was my biggest issue; while I enjoyed each director's work, it just didn't feel as though they worked together at all. Joshua Chaplinsky saw and reviewed the film at NYAFF 2012 and had this to say:

Although not anything mindblowing, Doomsday Book is a fine anthology for fans of Korean cinema. I'll admit to expecting more WOW! from [Kim] Jee-woon's segment, but that could be due to expectations built up by The Good, The Bad and The Weird and I Saw The Devil. He was on such a genre roll with those two, the prospect of him making a sci-fi film had too much potential to deliver, especially in the short form. Still, a nice package overall, and a nice apertif for [Kim]'s upcoming Arnold-Schwarzenegger-starring-American-debut-that-can't-possibly-be-good-can-it?

This being Well Go USA, I'm going to repeat the following praise over and over: Perfect picture, fantastic audio. This company is probably the most consistent in terms of A/V quality on the market today. Prepare to be blown away. The only deficiency is the lack of extras, which, in this case, consist only of a trailer, bummer. 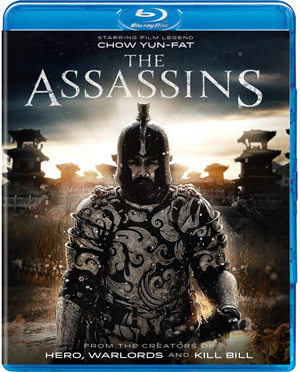 The Assassins:
This Chow Yun-Fat starring fictionalized exploration of the later years of military legend Cao Cao was less that well-received in its homeland. Not that it was bad, by any stretch, it's just lackluster for a film of such massive scale. The Assassins works as something of a follow up to John Woo's epic and successful Red Cliff films, following a lead character beyond the years of that film into his twilight. Chow is fantastic, as usual, and the film is gorgeous, but it just lacks that special something to make it really stand out.

The Assassins hasn't been reviewed for ScreenAnarchy as of yet, but I think my summation above will give you a pretty good idea of what you're looking at. The Assassins is a gorgeous piece of work with little substance to keep you interested beyond Chow Yun Fat's excellent performance. As I mentioned above, Well Go are among the best in the biz, and this disc looks and sounds incredible, as we've come to expect. Crank up the sub and turn down the lights and you've got a big booming experience ahead of you. The only extras included are a 14 minute behind the scenes segment and a trailer. Not much in the way of substance, but at its current bargain price of $13, it's well worth a shot. 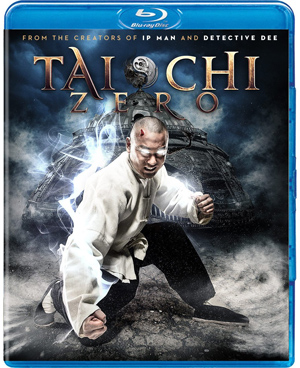 Tai Chi Zero:
I caught Tai Chi Zero at Fantastic Fest last year, and I think I was among the few who really dug what it was doing. The film is stylistically very diverse, with scenes ranging from traditional kung-fu/wu xia, to steampunk madness, to Scott Pilgrim style meta-narrative. It would be very easy to hate this odd mix, but I just couldn't. Director Stephen Fung took a big risk with a lot of the Huayi Brothers money and I really loved it. Thankfully for me, so did Todd Brown, so here's a bit of his positive review from TIFF 2012:

Director Stephen Fung delivers a deliriously over the top reimagining of the life of martial artist Yang Luchuan - founder of the Yang school of tai chi - in the first part of his ambitious blockbuster franchise. Tai Chi 0 balances a respect for the golden age of Hong Kong martial arts comedies with an obvious love for comic books, video games and steampunk influences to deliver high octane entertainment. ...

Playful, exciting and hugely entertaining the biggest down side to Tai Chi 0 is the inevitable wait for the sequel, a wait that Fung makes all the harder by embedding an absolutely gonzo trailer for the follow up in the closing credits.

Again, the disc is impeccable, both beautiful to look at and a joyous experience aurally. Tai Chi Zero is one you'll want to experience on the best system possible. Again, Well Go is a little light on the extras, as seems to be their modus operandi lately, but the behind the scenes stuff and the ludicrous US trailer are all worth checking out just because there is so much going on in the film that it is really interesting to get any kind of glimpse behind the curtain. 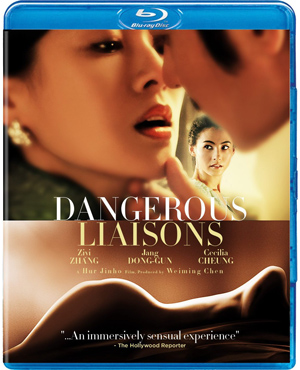 Dangerous Liaisons:
Well Go is releasing a pair of very different, very sexy films today. The first of the pair is this Chinese adaptation of the French novel, Les liaisons dangereuses, or, Dangerous Liaisons, directed by Hur Jinho. This is another film that slipped through our critical mitts during 2012, but I understand, after having spot checked the disc for A/V and read notes elsewhere, that it is a competent, if not overly impressive piece of work. The closest I could find to a ScreenAnarchy-sanctioned opinion on the film was in the comments of one of our announcements, in which ScreenAnarchy writer Niels Matthijs wrote:

It's not a bad film, but far from the classic it could have been. It's a little too poppy and carefree for all its intents to be a stylish thriller/romance. Sometimes there's a fine line between stylish and kitschy and Dangerous Liaisons end up on the wrong side a few times too often.

That sounds about right considering what I saw of the film. Speaking of what I saw of Dangerous Liaisons, Well Go's disc is, again, amazing, Zhang Ziyi has never looked more radiant than on this Blu-ray. This isn't one to write home about in terms of audio, but it's not the action epic we're used to from Well Go. The disc, again, sports a minimum of extras, topping out around 25 minutes total, but I guess that's the new trend. Perhaps those two disc special editions that Well Go were releasing a while back just didn't pay off. In any case, it's all about the feature, isn't it? This one looks and sounds great, even if the film is a bit soft. 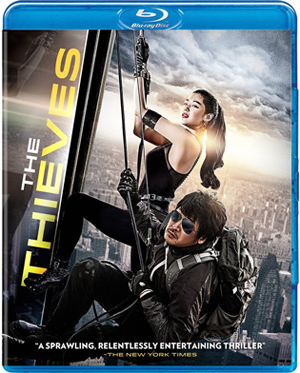 The Thieves:
Rounding out this batch of catch up reviews is Korean box office record-breaker The Thieves. This caper film owes more than a little to the Oceans 11 style, and it really works for this international production. We see major Korean stars and major Hong Kong stars rubbing elbows, and everybody seems to be having a lot of fun. As one comes to expect from Korean films, The Thieves is probably at least 15 minutes too long, but those 15 minutes are pretty fun, anyway. I particularly loved a small romantic sideplot involving Simon Yam that I wish had more screen time, but there is plenty to love about The Thieves, as our Pierce Conran observed in his review earlier this year:

The most anticipated Korean film of the year, with its dazzling cast and international locations, opened late last month and has since become the biggest domestic box office behemoth in years. The Thieves, Choi Dong-hoon's fourth feature, following The Big Swindle (2004), Tazza: The High Rollers (2006), and Woochi: The Taoist Wizard (2009), is his most ambitious yet. It is a vibrant and complex heist movie with one of the most high profile casts ever assembled for a local production. ...

An entertaining film that is at the same time cool, fun, clever and pulse-raising, it's exactly what audiences are looking for to beat the summer heat. It's packed with great dialogue, teeming with edge-of-your-seat moments and looks fantastic to boot. With 11 million spectators and counting, it seems that The Thieves knew exactly how to break into Korea's imagination, let's see if it can do so elsewhere as well.

Again, Well Go's presentation is spot on with an incredible picture and fantastic sound worthy of pissing off the neighbors. Go balls out on this one and you should have some fun. The extras are, again, pretty thin (less than ten minutes), but after a little over two hours of movie, that might not be such a bad thing. The Thieves is currently selling for $13 at Amazon, and it is well worth that minor investment.

That's it for Well Go right now. I hope to get back on the horse with more regular reviews very soon, but I hope this steers you toward a couple of gems you might enjoy.

More about The Assassins