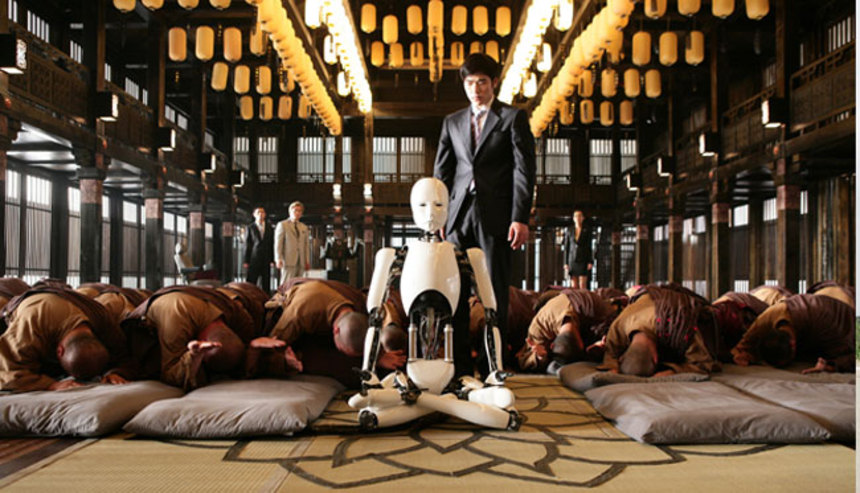 I ain't gonna explain the backstory any better than the fine folks over at Subway Cinema:

Originally planned to be a three-parter directed by Kim Jee-woon, Yim Pil-Sung (director of Hansel & Gretel and Antarctic Journal), and Han Jae-Rim (The Show Must Go On), production started in 2006, and then fell apart when Han's film (a retelling of an O. Henry short story) proved to be unworkable. With only two-thirds of the movie completed, it was shelved. Then, after a new influx of cash in 2010, Kim and Yim collaborated on the movie's third segment, and now their three-parter about the end of the world is ready for the big screen.

In his intro to the film, the festival programmer said a Korean zombie movie was a rarity because as far as he knew most Asians burned their dead. He himself was Asian, which helps his credibility, but he also had a French accent, so I'd take what he said with a pinch of salt. Plus, there's THIS.

Regardless, Korea is overrun by the undead in Yim Pil-Sung's "Brave New World." The cause of this particular zombie apocalypse is a rotten apple, an allusion to the assumed fruit of the Tree of Knowledge of Good and Evil in the Bible. The dating scene of modern day Korea stands in for Eden and science is (possibly?) God, as it is pollution and corporate greed that contribute to man's downfall, robbing him of the sweet release of death. There is no tree of Life to undo the damage in this scenario (or, more appropriately, tree of undeadening). The zombie thing has been done to death, but this is a humorous little romp that gets things started nicely.

Next up is the centerpiece of this NYAFF centerpiece film, Kim Jee-woon's existential robot yarn, "The Heavenly Creature." More serious in tone, and technically not about the end of the world, this segment focuses on a laborer robot at a Buddhist temple that achieves enlightenment. This does not please the evil manufacturer, who dispatches a team to replace the "defective" product. Thought provoking discussion about the meaning of life ensues (although I felt it fell on the philosophy 101 side of things). Skillfully filmed and directed as always, Kim Jee-woon's first foray into sci-fi would make for a great expanded feature, methinks. I can't take credit for this, because I'm pretty sure I read it elsewhere, but the "The Heavenly Creature" is like a mix of Blade Runner, Batteries Not Included, and iRobot, starring the Svedka vodka robot with a Joker smile.

The final segment is supposed to be a collaboration between Kim Jee-woon and Yim Pil-Sung, but tonally it feels more like Pil-Sung's film. It is about a little girl who orders a replacement 8 ball for her father's pool table on the internet, but may have accidentally sent it through a black hole in space instead. Something to do with her conspiracy theorist uncle's computer and wish fulfillment. Consequently, it is now rocketing towards Earth and the end of humanity is imminent.

"Happy Birthday" showcases more originality in its thinking than "A Brave New World," and is therefore the superior segment. It doesn't necessarily make a whole lot of sense, but it is fun and funny and is a whole lot cooler than Armageddon or Deep Impact. It makes for a good finale, bookending Jee-woon's contribution nicely with "A Brave New World."

Although not anything mindblowing, Doomsday Book is a fine anthology for fans of Korean cinema. I'll admit to expecting more WOW! from Jee-woon's segment, but that could be due to expectations built up by The Good, The Bad and The Weird and I Saw The Devil. He was on such a genre roll with those two, the prospect of him making a sci-fi film had too much potential to deliver, especially in the short form. Still, a nice package overall, and a nice apertif for Jee-woon's upcoming Arnold-Schwarzenegger-starring-American-debut-that-can't-possibly-be-good-can-it?

Joshua Chaplinsky is the senior editor for LitReactor.com. He also writes for ChuckPalahniuk.net. He was a guitarist in the band SpeedSpeedSpeed, and is the poison pen behind thejamminjabber, although he's not so sure he should admit it.