Watch Chow Yun Fat In US Trailer For THE ASSASSINS 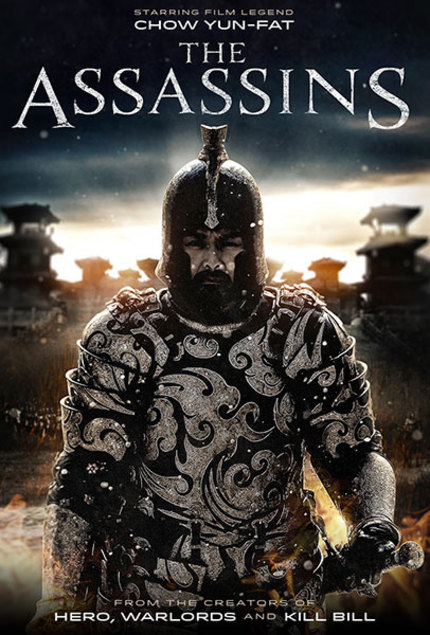 In the year 198 BC, Cao Cao (CHOW YUN FAT), Prime Minister of the Han Dynasty, ventured to the east and defeated China's greatest warrior Lu Bu, terrifying every ambitious warlord across the country. Several years later, after taking the Han Emperor under his wing, Cao crowns himself King of Wei. He built a magnificent Bronze Sparrow Island to symbolize his power and rumors spread that he would replace the Emperor.

Meanwhile, young lovers Mu Shun (TAMAKI HIROSHI) and Ling Ju (CRYSTAL LIU YI FEI) are taken from a prison camp to a hidden tomb, where they spend five cruel years together, training as assassins for a secret mission. In the year 220 BC astronomical signs predict dramatic change. As a result, Cao's son Cao Pi (QIU XIN ZHI) and Cao's followers urge Cao to become the new Emperor - but unknown and opposing forces plot against him.

Starring international film legend Chow Yun-Fat, and created by the team behind gripping action dramas such as HERO, HOUSE OF FLYING DAGGERS, CURSE OF THE GOLDEN FLOWER and KILL BILL, THE ASSASSINS is a gripping, lush historical epic that mixes tragic romance with taut political drama.

A new US trailer for the film has arrived in advance of the local release. Check it out below.

Do you feel this content is inappropriate or infringes upon your rights? Click here to report it, or see our DMCA policy.
actionchinachow yun fatepicmartial artsperiodthe assassins

More about The Assassins