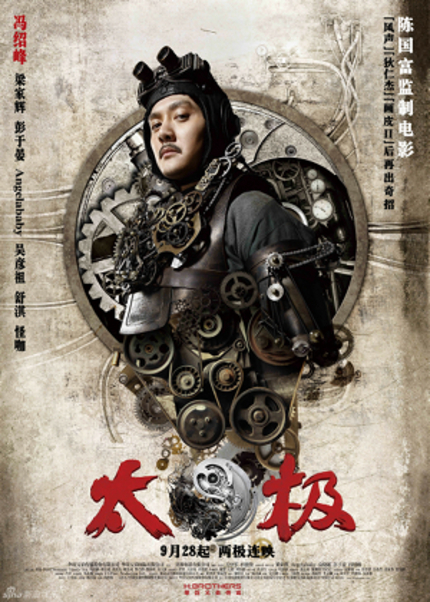 Stephen Fung was on top of the world in 2005. The popular actor had made a successful transition to directing with both his debut feature, Enter The Phoenix, and sophomore effort, House Of Fury, embraced by fans and critics alike. Fung appeared poised to be one of the leaders of a new wave of Hong Kong directors, popular figures who embraced and engaged the young audience in a way that the old guard no longer could.

And then Edison Chen happened.

In the midst of production on Fung's third feature, Jump, his leading man was caught up in the midst of the biggest sex scandal in Hong Kong entertainment history. Through no fault of his own, Fung's third effort was a catastrophe and the talented young director simply dropped off the map.

But no more. Fung arrived to great fanfare at both the Venice and Toronto film festivals with his latest effort, Tai Chi Zero. The first of a two part film - with a third being prepared as well - Tai Chi Zero aims to do nothing less than to reinvigorate the Chinese martial arts movie with a fresh style, fresh energy and a new star. I had the chance to speak with Fung about the film in Toronto and present that conversation now, prior to the film's US debut at Fantastic Fest.

ScreenAnarchy: I'd like to ask you about the process of setting this film up. It's so much larger than your previous movies and there were so many problems on JUMP - which had nothing to do with you, obviously - plus making the transition to working in the mainland. What was the process of getting something like this started up?

Fung: I think it really helps to have a big studio behind you, like Huayi Brothers. They're obviously a mainland China studio and it is their intention to invest in big projects like TAI CHI because they believe that audiences want to see something new out of kung fu movies. Our producer Chen Kuo-fu, who also wrote the script, also believed in this and wanted to do something that could break new ground. And they knew that to break new ground the budget had to be bigger, because they're testing out new waters. We didn't want to do an experimental tai chi movie, where you just try out a little bit. It's better to at least try to go all the way.

There's a certain irreverence to the humor in your earlier films. Were there any concerns at all about whether you would have to modify you style and approach when working in the mainland? The censorship rules are just different there.

For TAI CHI ZERO it wasn't an issue because we weren't touching on any sensitive material. It's also never been my style to ... I guess in my first movie, ENTER THE PHOENIX, I dealt with gangsters and homosexuals which may be sensitive to censorship in China, but in this particular case it worked fine. I didn't have to deliberately try to shy away from a certain kind of humor because that humor just wasn't there in the first place.

One thing that I really loved about the movie is how well I think you balance a sense of respect for the Golden Era, the 1980s kung fu comedies, while really pushing into a new era. Particularly how you brought in the old stars and made a really deliberate point of making sure everyone knew who they were and then let them do their thing. When you started doing that were there particular people you had in mind? Stars you had particular connections to or fondness for from your youth?

Yes. The reasoning behind having descriptions behind them, putting their resumes on screen, that started when we thought we should do it to the main character, Jayden Yuan. He's a newcomer, had never done anything on screen before. So we thought we'd give him a description - he's an Olympic wushu gold medalist - that people would focus less on acting. [laughs] Managing expectations! He's a kung fu guy, he's never done any film before!

Yes, I think he does! But it was down the road a bit where we could really see that and be really comfortable. So we thought at the beginning that maybe we should ease audiences into their acting. And then we just thought, "That was actually quite fun, how about we put descriptions for EVERYBODY?!" Except the ones you know very well, like Shu Qi. We didn't need to do anything for them. There are a lot ... I just wouldn't call a lot of the cast professional actors or actresses. Like Mandy, she's a top model in Hong Kong. So we put that description on.

When you were choosing the 70s and 80s stars, were there reasons you chose those particular people? Were they stars you followed growing up?

Some of them are. I actually got an interesting question before from a reporter who asked whether I was trying to make a sort of EXPENDABLES movie with all these 70s stars in it. And no, it wasn't that, I just thought these particular guys would suit the roles really well. That was it.

It almost feels like you're passing the torch. You have these people from the previous generation who laid the groundwork for all of this playing against all of these new faces. The problem with Chinese speaking kung fu movies in the past ten years or more is that there just haven't been any new stars. But now in this cast you have the older guys, who laid down the groundwork, then you skip the current generation and you obviously went out of your way to find a whole lot of new people. Here's the past, here's the future, let's go.

Yes, yes. That's also why we wanted to cast a newcomer, since this whole project is based on trying to break new ground. There just hasn't been a new martial artist who has really broken out and we were trying to find one. And Jayden seems to be right for this character. He's a very shy guy and he seems to fit right in.

In terms of some of your style choices, what I heard people talking about after the screening were films like SCOTT PILGRIM VERSUS THE WORLD. Both SCOTT and TAI CHI ZERO really approach the material like a graphic novel, in the framing and editing and all the captioning you do. And the captioning is really funny, by the way, it works even in translation.

I think that comes out of just what I'm used to, what my hobbies were as a kid. And I studied graphic design when I was attending school in Michigan. Yeah, I guess all of the above ... the mix of genres became a mixed bag of inspiration for me.

Were there particular films out of China that you looked at? Other directors who you think of as the young generation who are going to change things?

I think Pang Ho-cheung. He is a director who I really like. He sticks to his own style, his snappy dialogue. His new movie VULGARIA he shot for just twelve days and it's having huge success in Hong Kong. I like him a lot. I like Wilson Yip a lot. He's still pretty young, too. I think it's interesting that there are different kinds of directors and films, from Pang doing a film in twelve days to us doing this massive project in three hundred days. It's an interesting time.

I know the second film is definitely coming very soon but there is talk of a third one as well. Is that happening?

Yes! We are working on the script right now. I hope the first two do so well that we can increase the budget for the third one.

Have there been press screenings in China yet? Any idea how the local audience will respond?

No, just Venice and Toronto. I anticipate that some will like it and some will hate it, but they're going to talk about it.

Now, I was in Hong Kong right around when the Edison Chen thing happened and I had been following JUMP really closely because I had really enjoyed HOUSE OF FURY and wanted to see what would happen for you next. And what happened was Edison. I can only imagine that when that happened it must have felt like your career blowing up.

Yes, though at first I didn't realize just to what magnitude the scandal would be. I saw the photos and at first I was still in disbelief, that things could have been photoshopped. That was my first reaction. And then I learned that they're real and the magnitude of the incident was just unbelievable. For two weeks in a row, every day in the newspapers it was the A1 cover story. That's unheard of. They were just talking about the same thing every day for two weeks. And it became a real issue because that film was shot in China and we were expecting a good response from the mainland Chinese market.

The worst part of that whole thing for me was that if the producers had decided not to release in China then we could have just kept Edison in and not had to reshoot it. It just would not have been shown in mainland China but could make some money in other territories. But they still wanted the Chinese market so we had to change a lot of things so that we could reshoot his part within the budget we had. And now it's the way it is. And it didn't do well in China anyway. It didn't do well anywhere.

Does it feel like a certain amount of vindication for you now that you're clear of that and you've done this and been embraced by two of the largest film festivals in the world? Does it feel good to be done?

Yes, absolutely. While I was shooting this movie I was really able to let go of the whole incident with JUMP.