Review: TAI CHI ZERO Respects The Past While Racing To The Future 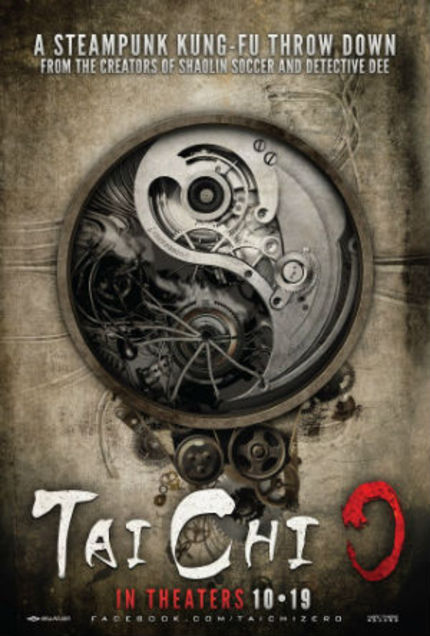 Director Stephen Fung delivers a deliriously over the top reimagining of the life of martial artist Yang Luchuan - founder of the Yang school of tai chi - in the first part of his ambitious blockbuster franchise. Tai Chi 0 balances a respect for the golden age of Hong Kong martial arts comedies with an obvious love for comic books, video games and steampunk influences to deliver high octane entertainment.

Yuan Xiaochao - a gifted martial artist in real life and gold medal winner at the 2006 Asian Games - plays Yang Luchuan, a young man born a little bit different. A boy with what looks to be a single demon horn sprouting from his forehead. It's not, as it turns out, but it is a sign that he may very well be a once in a century prodigy for martial arts. A fact that unscrupulous military leaders are more than happy to use to their own advantage.

Luckily for Yang a military doctor also recognizes his horn for what it is and gives him a dire warning. The kung fu he is being trained in will ultimately drain down his life force and leave him dead. His horn will darken as he fights and when it turns black his days are numbered. The only option is to travel to the Chen Village and beg the Grandmaster there to train him in their unique and powerful style of 'internal' martial arts to replenish his chi.

Yang travels only to be rebuffed at the gates. The Chen's, it seems, will not share their kung fu with outsiders. But Yang refuses to admit defeat. His triumph may come in the form of an external threat to the village - a Western backed consortium wants to run a railway through the village and is willing to destroy the entire valley to do so. If Yang can stop their progress he may win enough favor that the village will agree to train him.

The martial arts comedy is a tried and true genre in Hong Kong and Chinese film, and it is a genre that Fung clearly knows and loves well. The production design and structure of the story stay close to the tried and true, touching on all of the most beloved elements of the type. Fung also shows his respect for the past by enlisting a number of classic old school martial artists - among them a founder of the Jackie Chan Stunt Team and Xiong Xin Xin (Clubfoot from the Once Upon A Time In China series) and giving them all their moments to shine. The old guys still have skills.

But Fung is also not one to get lost in the past. He knows full well that the kung fu comedies of old fell out of favor because they refused to change with the times and many elements just became tired and cliché. No risk of that here. Fung delights in messing with the form, scattering elements of animation and a heavy debt to comic book styles throughout. That second bit is not just in the style of framing and editing employed throughout - though it's obvious there - but in the most over the top and frequently hilarious use of on screen captioning that I have seen in some time. Captions are used to deliver visual gags as well as written, oftentimes feeding useful information to the audience while doing so. Hell, I'd have missed the Andrew Lau cameo if Fung didn't insist on giving a partial on-screen resume for all of his notable cameos. Comparisons to Edgar Wright's Scott Pilgrim Versus The World are already circulating regarding Fung's effort here and those comparisons are absolutely fair and apt.

Fung also embraces the future by going out of his way to find a new generation of martial arts talents and putting them on screen. While some are clearly being held back for the upcoming sequel Tai Chi Hero - due to release in China a month behind this one - Fung has stacked his cast with actual martial artists, most of whom are making their first on screen appearances. Yuan is far from the only Olympic grade athlete to be featured in the film.

Playful, exciting and hugely entertaining the biggest down side to Tai Chi 0 is the inevitable wait for the sequel, a wait that Fung makes all the harder by embedding an absolutely gonzo trailer for the follow up in the closing credits.