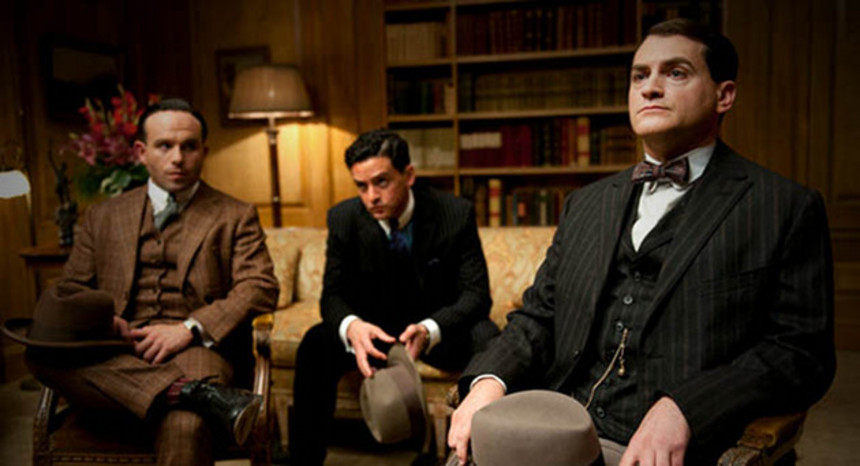 The entire world may not have turned against Nucky Thompson - his plan to bring down George Remus and, by extension, the Attorney General gets off to a lovely start, for one - but it certainly feels like it has throughout the run time of The Milkmaid's Lot. Badly concussed, confused and bed ridden following the explosion at Babette's Nucky stumbles his way through the episode trying to rally the troops and generally distracting from the fact that, at its core, this episode really belongs to Margaret.

But first, a role call of those present ...

First, Gyp Rosetti quickly gets things well in hand in Tabor Heights, rolling in with a virtual army of heavily armed men and paying off the entire town to keep their mouths shut as he re-routes all of Nucky's inbound shipments of liquor to his own waiting trucks. He's a man on the rise and very much still looking for the opportunity to finish off Thompson and Rothstein.

Harrow's plotline continues down a generally pleasant path, a date with the lovely Julia met with encouragement from his fellow war veterans and - much more importantly - even more encouragement from Julia herself. We also get a touching moment between Harrow and his young ward Tommy - "Oh, the rhinoceros is waiting for the train," he says casually, as though this is something rhinos do all the time - before it ends up that Harrow's going out and leaving Tommy unsupervised leaves the youngster free to walk into one of the brothel rooms in mid-coitus. Gillian's pissed and Tommy says simply that he wants to go home. I can't imagine Harrow will allow this to go on a whole lot longer.

Remus - as mentioned earlier - is arrested by forces led by Esther Randolph. What wasn't mentioned earlier was that Remus has a massive peacock cage in the middle of his massive marble living room. 'Tasteful' is not a word that applies to the decor.

A planning meeting between Nucky and the inner circle provides a bit of character insight into the constantly shifting power structure - Owen, Eli and Chalky White are all in, Mickey Doyle is out - but little of substance, though this hopefully marks the return of Chalky into a more significant part of the story.

But, like I said at the outset, while the plot here revolves purely around Nucky and his attempt - which fails, incidentally - at rallying old / former allies for a return assault on Rosetti, the meat of the episode lies entirely with Margaret, the episode delivering some of the best character work of the show. Overrun and frustrated by her children, Margaret plays the role of the good wife trying to support her husband and, as a result, witnesses the most flagrant example of impending violence and bloodlust to ever pass through Nucky's lips throughout the run of the show. If she ever had any illusions as to the true nature of her husband, those are gone now. Running parallel to this is the simmering tension between Margaret and Owen, the pair stealing moments with one another when they can and Owen offering to take Margaret away. Will they have the chance? Nucky's appeals for help rejected the entire Thompson clan - children included - are now in peril and Margaret has proven herself a master schemer in the past.

What lies in the future of Boardwalk Empire? It's hard to say for sure but Margaret - a rich and complex character who has been largely shunted to the wings this year - looks to be taking a more prominent role again, partly by default as Nucky's world collapses back down to his family and closest allies and partly by her own hand as she is either going to have to move to protect her husband or lay plans to abandon him. Either way should be interesting ...