Review: BOARDWALK EMPIRE S3E10, A MAN A PLAN (Or, My Head Hurts Just Thinking About It) 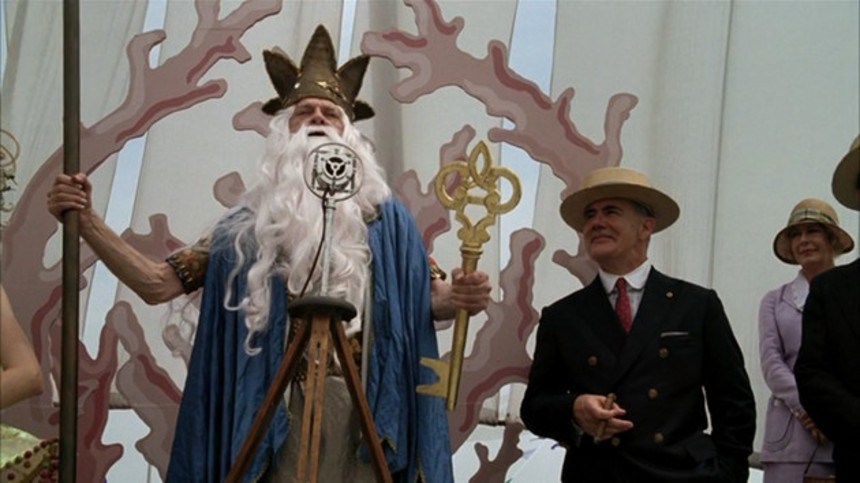 It begins with whiskey, it ends with whiskey, and in between the Jeremy Podeswa directed A Man, A Plan neatly balances strong character work with extreme head trauma. In other words it's all you could hope for from an episode of Boardwalk Empire. A Man, A Plan stands as one of the season's strongest episodes not only for the way it cinches tight so many seemingly disparate threads into a compelling and convincing tapestry of violence but for the way it manages to explore a simple theme within each of the lines contributing to the overall picture: Namely who, if anyone, is actually trustworthy in this whole sordid world. It's a short list.

Gaston Means sits neatly on top of the list of people who cannot be trusted in this episode, the slippery attorney continuing to pit everyone against everyone for his own advantage. Having convinced Nucky Thompson that arresting Remus was the way to bring down the Attorney General, Means now gives a call to point out that the Attorney General's assistant Jess Smith is an unpredictable liability who Means himself can remove for a very healthy price. Means then promptly orchestrates a situation in the Attorney General's office to convince him of the same thing, charging the same price to provide the same service he is offering to Thompson. Which is not a bad move, if you can pull it off. And, yes, he makes good, in incredibly memorable fashion.

Let me say this right now, to get it out of the way: Stephen Root has done an absolutely incredible job of bringing Means to the screen this season, bringing depth and complexity to what - on the page - could very easily be seen as a gimmicky character. Root's performance is a consistent highlight, the way he brings sheer delight to the moral murkiness of his character an absolute delight and if Root fails to be nominated for an Emmy for the role it will be a crime. He is spectacular and he deserves recognition.

But enough of the fawning ...

Who else makes the list of untrustworthy folk? Owen Slater is on there for sure, proposing to his lover, Katie, as a means of covering up his ongoing affair with Margaret Thompson. He's a likeable fellow, that Slater, which means he is forgiven a lot but he was also a paid IRA killer whose prime positive characteristic appeared to be loyalty until he began sleeping with his boss' wife. Oh, yes, and put Margaret on that list as well, of course.

Also untrustworthy? Hello Lucky Luciano and Meyer Landsky, as one of the season's seemingly minor storylines comes home to roost big time. Why have the writers been looking in from time to time on Luciano and Landsky's foray into heroin? Because today is the day that they're prepared to push into the big time and all they need is a wealthy backer. They start with old friend Arnold Rothstein, of course, but Rothstein slams the door shut. So where do they go next? To Italian mob boss Masseria, of course, enemy to both Thompson and Rothstein. And how to prove their friendship? By spilling the details of Thompson's plan to move on Masseria's life.

It's old news at this point that Gyp Rossetti is untrustworthy, of course, and he proves so once again in typically wince inducing fashion. It makes you wonder how this show ever got along without Bobby Cannavale. Michael who?

The prime failure, however, lies with Nucky Thompson's judgement. Once a master schemer who understood the value of friendships and alliances as the key to power Thompson's grip continues to crumble as he neglects his core power base and underestimates the strength of his opponents. Even without the advance warning received by Masseria it's hard to imagine Nucky's move against his life had any chance of succeeding, the warning perhaps making the end result more spectacular than it otherwise would have been though it never really could have gone any other way. Note to Thompson and the writers, however: Why the hell are you opening unlabelled boxes delivered to your door by strange men in the middle of the night so soon after someone tried to blow you up? Are you trying to die, perhaps? More telling than Thompson's failure against Masseria, however, is his casual brush off of Chalky White, a loyal ally who has done nothing but right for Thompson. White's a proud man who demands and deserves better than this given the pair's mutual history and I can't imagine this isn't going to come back on Thompson somehow unless he makes things right immediately.

Really, the only good man in this increasingly sordid mess is proving to be Richard Harrow, who - it should be pointed out - at one point in this episode beats an old drunk to the ground and chokes him to force an apology to his daughter and was - and remains, I presume, if there is sufficient cause - more than willing to kill a great number of people at Jimmy Darmody's command. And when a guy like Harrow is clearly the best man around then things are clearly very, very ugly. Which is exactly how you want things in the Boardwalk Empire.