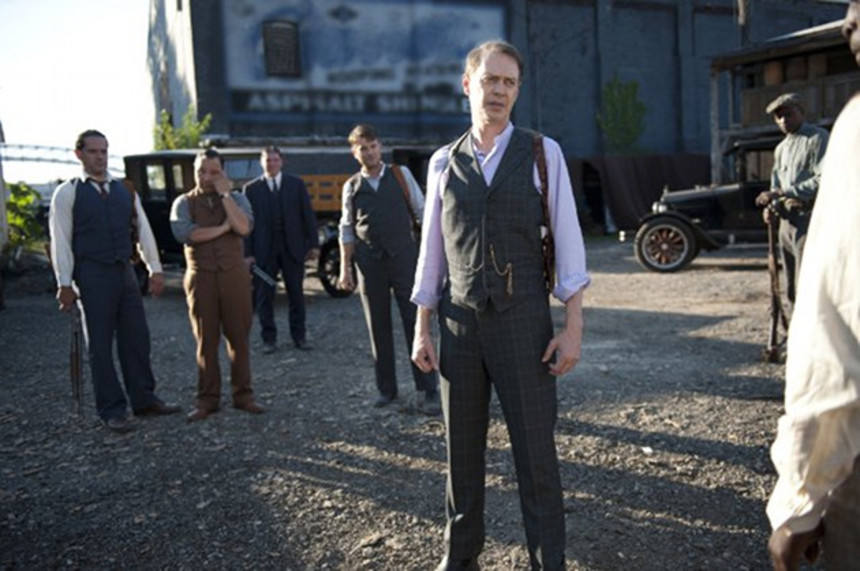 It should have been longer. Yes, it's a criticism that is also somewhat praise in that wanting more is always a good thing, but after a full season build up to the inevitable, bloody confrontation that caps the third season of Boardwalk Empire budget and time constraints left director Tim Van Patten resorting to montage and the briefest of nods directed at otherwise key characters. It works well enough, yes, and Van Patten spends his resources wisely - i.e. focusing tight on Nucky Thompson - but turning Al Capone loose with a full license to wreak whatever havoc he may care to and then reducing his screen time to little more than a couple insults slung at Chalky White ... well, let's just say that the time spent with the secondary players is a bit underwhelming and an extra hour to send everybody off right would have made a huge difference.

It's full on war between Thompson and Gyp Rossetti when things pick up, Thompson's forces now bolstered by the presence of Al Capone and Chalky's shotgun wielding men. Bodies are piling up on all sides and Thompson recognizes - correctly - that if things continue this way he's going to end up either dead or a pariah when things are over. The violence is necessary but it's not enough, and so the wheels begin turning. And his path out is brilliantly devious.

But Margate Sands does more than just close off this season's story line. While there is certainly nothing as shocking as the death of Jimmy Darmody last season - when it was not clear how the show would come back at all - there is a definite sense of overall tidying up to the end of season three with lingering elements from earlier seasons being wrapped up with finality and the show being pared back to basics to set up what will hopefully be a long running three way conflict between Atlantic City, New York and Chicago forces in seasons to come.

The Darmody story line is closed with finality, Gillian given a good death and Harrow making what appears to be an honorable and tragic exit from the story. His is a bittersweet exit in that while he is a fantastic, compelling character he really had no role left to play in the overall story. Also seemingly out is Margaret Thompson and the children - gone to New York with the children, refusing help from Nucky and adamant that she will not return. There are forseeable means to bring both Margaret and Harrow back, should the creators choose to do so - Harrow's history with Thompson coupled with Thompson's stated desire to only work with people they already trust could potentially see him replace Owen and / or Eddie in the strong man / fixer role - but the willingness to jettison the past to move forward is a necessary attribute if you have any hope of keeping things fresh.

A bigger question is whether Nelson Van Alden will return for series four. He's clearly still around and could easily turn up in the Capone focused parts of the story but is so thoroughly on the fringes right now that it is hard to imagine any impact the character may have possibly justifying Michael Shannon's salary unless he is pulled directly into the Capone gang. Andrew Mellon (James Cromwell) will clearly stick around and was that Stephen Root as Gaston Means whispering into his ear? I do believe it was.

Boardwalk Empire attempted one of the most difficult tasks you could ask of any show this season, continuing on after jettisoning a key actor and the central conflict that had defined the entire series up until that point. And it succeeded remarkably well. Season four is already greenlit and let's hope there are many more to follow behind.