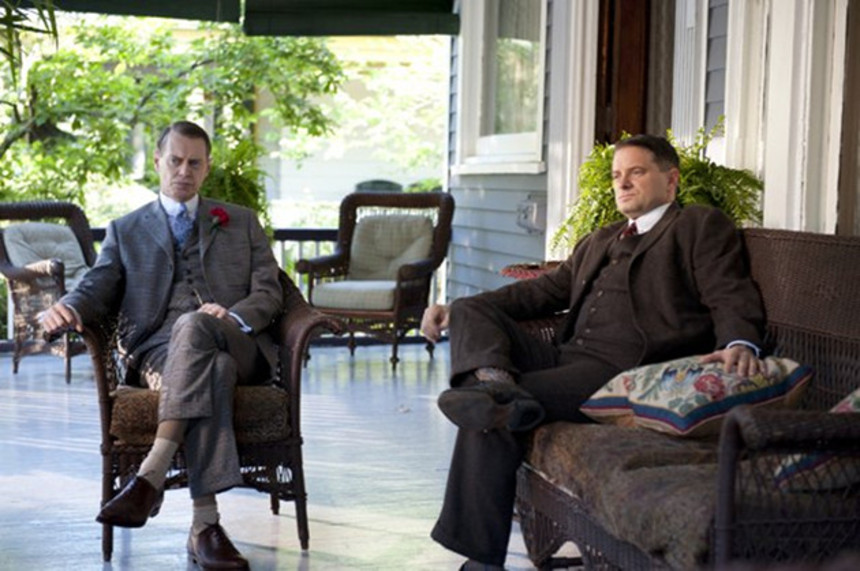 Though we're just coming up on Halloween in the real world, it's Easter in Atlantic City and, criminals or not, that means everybody in the Boardwalk Empire world is taking a day off to spend time with family. By the time the day is done some may wish they spent their day being shot at instead. Though there are some notable characters absent - no Chalky White, who is sadly becoming an afterthought this season; no Nelson Van Alden, either, who we've not seen since he turned to O'Banion for help disposing of a body back in episode five - director Allen Coulter has crafted an episode no less compelling for being one of the quieter efforts of the season.

There are four principal storylines running through the episode and, though it's not the first presented, we'll begin with Harrow. Harrow begins the day by being summoned to Gillian Darmody's room to find his employer draped across her bed wearing an eye mask to block out the light and complaining of being in immense pain from her period. Gillian has shut down the brothel for the day, sent all the girls home, and Harrow is to take Tommy out with him for the day. Which suits Harrow just fine as he's got himself a lunch date with the lovely Julia Sagorsky, who is hosting an Easter meal for the returned soldiers from the Legion Hall along with her supremely cranky father.

Things go about as well as you could expect in the Sagorsky home - which is not very, thanks to the perpetually angry man of the house - but Julia proves herself to be remarkably unfazed by Harrow's disfigurement as she takes great care to prepare him a separate meal and a private space to eat unobserved. And when the antisocial elder Sagorsky finally blows his stack, it's Harrow who intervenes and takes Julia for a walk along the boardwalk. Does it factor into the larger story? No, not in any foreseeable way, but it's a wonderfully human moment featuring one of the series most consistently intriguing characters and the simple fact that they're giving Harrow these moments now means that he will almost certainly factor large later in the season.

And then there's Harrow's employer, Gillian Darmody. Just when you think Gillian can't get any more twisted and disturbing she goes and does exactly that. Her 'illness' was all a ruse, of course, Gillian shutting down the house so that she can engage in a tryst with her new, youthful, and remarkably-like-Jimmy lover Roger. Which seems an extreme measure, of course, given that she lives in and operates a brothel and is therefore free to fuck whomever she pleases. Does Gillian, perhaps, want to keep the nature of her work hidden from Roger? It seems that way at first, at least until Roger asks how she ended up in this grand old house and Gillian responds with a story about her late husband. The moment that the coin drops and you realize that she is talking about Jimmy and not the Commodore is just deliciously icky, setting the skin to crawling as you realize that Roger is well and truly fucked in more ways than one. He's not just a substitute for her affections, you see, he's a stand in for Gillian to process her grief and the reality of Jimmy being dead. She needs a body to accept that fact, and Roger's it.

The bulk of the episode, however, belong to brothers Nucky and Eli Thompson, the whole clan gathering together at Eli's house for an Easter Egg hunt and dinner. It's an emotionally charged day, the first time the families have been together since their relationship soured and the first time wives Margaret and June have ever met. Coulter does a remarkable job of staging the encounter with multiple layers of meaning running throughout. There are the children, largely ignorant and just happy to see everyone. There is the simmering tension between Nucky and Eli. There is Margaret's broken reaching out to June, who retreats into simple politeness rather than acknowledging what Margaret has to say about her marriage. And then, somehow, there is a sweetness between Nucky and Margaret as each sees something new and unexpected in the other and realize that they did actually love one another once. The only real story element to progress her is Nucky's elevation of Eli to run the warehouse with Mickey Doyle - both an olive branch to his brother and a recognition that Eli was the only one who recognized the situation in Tabor Heights for what it was - but the character work is marvelous. And any move to bring Eli back closer to the heart of things is a good move.

And then, finally, we have the return of Gyp Rosetti. And while Gyp gets the least screen time of the lot he makes the most of what he's got. Gyp is besieged on all sides. While he was away taking over Tabor Heights his rivals in New York were whittling away at his territory there and the attempted hit by Rothstein's men has left Rosetti short handed and so weakened that there's nothing he can do about it. His enemies know this. And the bars he supplies know this, leading most to refuse to pay protection money, meaning Rosetti is now badly short on the amount he owes Joe Masseria.

This would be enough to make Rosetti's life a special kind of hell but then Rosetti's world widens out a bit and we meet his people, the mother and sisters - possibly a wife as well - that Rosetti lives with. 'Dominant' is a word for the women in Rosetti's life. 'Unimpressed' is another. And the look of sheer panic that Rosetti shoots at his underling to make him stay for dinner - a sort of "Please, God, don't make me stay here alone with these women." - is absolutely priceless.

But here's the upshot to the entire episode. Rosetti's panic is for good reason. He's on his way out and he knows it. And when Masseria delivers the word, his goons moving to remove Rosetti from the boss' presence, Rosetti spits out what are perhaps the truest and most dangerous words he has ever spoken. Thompson, Rothstein and Luciano have plans. Big plans that go beyond business as usual. And plans that very specifically do not include Masseria and his people. Let those plans move forward and Masseria's whole operation will be squeezed out. Sure, Tabor Heights didn't work but that's because Rosetti didn't have the manpower. Give him the resources, Gyp promises, and he'll kill them all. Thompson, Rothstein and Luciano, all dead. And Masseria likes the sounds of that.

Last week the worst Nucky had to worry about was criminal prosecution. After this week a war is coming. The final third of the season should be good.