Review: BOARDWALK EMPIRE S3E08, PONY (Or, That Gauntlet You Threw? Right Back Atcha.) 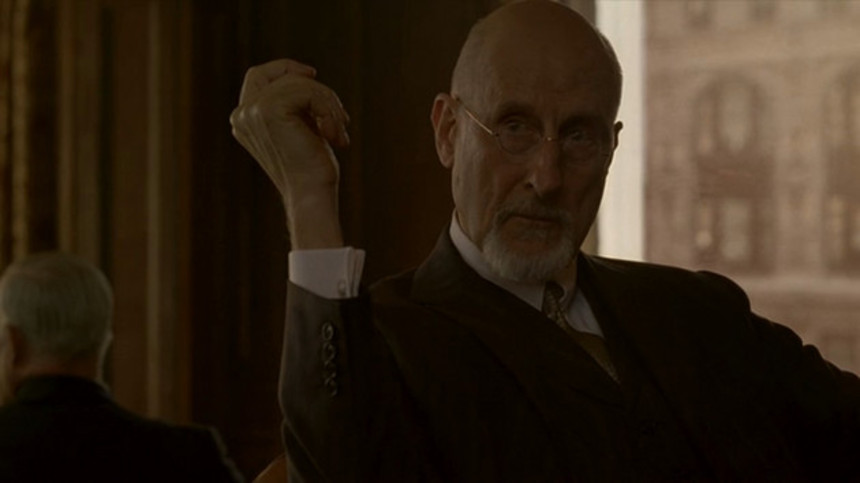 Been itching for the return of Nelson Van Alden? Wondering when and how a man as prone to excessive violence as Gyp Rosetti would strike back after the attempt on his life? Curious as to how a woman in the thirties would obtain a diaphragm? Well, step right up kids, because Tim Van Patten is serving up all of the above and a whole lot more in one doozy of an episode of Boardwalk Empire.

This week's episode - titled simply Pony - starts by returning to s string of relatively small scale story lines and weaving them into an ever more complex web of increasingly open conflict before things get literally explosive. Van Patten kicks things off with Gillian Darmody who keeps things interesting on multiple fronts. There's the cremation of her supposed son Jimmy - who we know full well is actually her young lover Roger - after is drug overdose, for one thing, the cremation capped by Harrow observing simply that "Jimmy deserved better." You can read that as a comment on Jimmy's death in general, I suppose, but given that Harrow knows full well how Jimmy really died and is not prone to taking kindly to anything that smirches the memory of his friend - such as saying that he died as a drug overdose - it seems more likely that Harrow's statement is a veiled threat, or at least statement of displeasure, directed at Gillian herself.

But Gillian pays no mind. Finally having accepted Jimmy's death she's too busy working up a righteous anger directed at Nucky Thompson. She buys Lucky Luciano out of her brothel, first of all, in no small part because of his business dealings with Thompson. And when Nucky turns up to offer his very much false condolences it ends with a drink thrown in his face and barely restrained anger. Beyond the creepy, incestuous cougar factor Gillian remains one of the most compelling characters on the show because she remains a true wild card. While everyone else remains focused ultimately on profit Gillian moves according to her own emotions and whims and there's never any way you can quite tell what she'll do.

Things are afoot in Chicago as well. Johnny Torio is back in town and waxing philosophical about the more relaxed life he enjoyed while in Naples. Is he thinking retirement? He's certainly willing to let Capone take an increasing role in things. And Capone brings us in a roundabout way to Nelson Van Alden.

Absent for a couple weeks, Van Alden is now in debt to Capone's rival O'Banion, after O'Banion helped him dispose of the body of the prohibition officer Van Alden killed with his wife. How to pay it off? A still in the kitchen, for one thing, and Van Alden's presence as muscle when O'Banion and Capone meet. It's a lot for the former lawman to take, which goes at least a small distance to explaining why he burns one of his co-worker's faces off with an iron. That and the fact that Van Alden is borderline psychotic and that border is drawing nearer all the time. So much for the day job.

Other than his love life - which is an utter fucking mess - Nucky feels like he's got things under control. Means has managed to find a route for Nucky to meet Secretary Mellon along with a sufficiently compelling angle whereby Nucky may be able to set Mellon on Attorney General Harry Daugherty. And, holy shit, it actually works. Mellon agrees to take down George Remus, which will lead investigators straight back to Daugherty, which means Nucky's problems should all be solved. A quick dinner with Rothstein and Luciano to sort out business matters in New York and Nucky should be free and clear. Hell, the mistress even seems to have forgiven him for beating the hell out of her soon-to-be co-star back in New York. Things are on the up and up until Rosetti rolls in and - spurred by the aforementioned Gillian Darmody - puts an end to one of the show's most lavish and well used sets.

Chalky White remains a forgotten man these days, which is a sad waste, but things are cinching up tight for what should be one hell of a run to the finish. Oh ... and that diaphragm? Margaret wants to keep banging Nucky's bodyguard and right hand man. Surely that can't end badly, right?