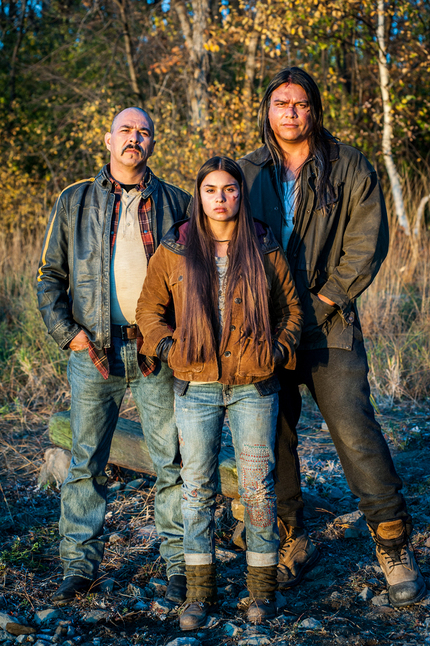 Let this be clear right from the outset: Jeff Barnaby is important. The multi-disciplinary artist - a visual artist, poet and writer of short stories as well as an award winning filmmaker - Barnaby is one of those artists with a shockingly distinct voice, one that takes a bitter cynicism, channels it in consistently surprising directions, and ends up in a position that is somehow both bleak and deeply human.

That Barnaby is Native Canadian raised on a Mi'gMaq reserve in Quebec is certainly a driving force in his work but it seems somehow dismissive to refer to Barnaby as a Native Filmmaker, as though that somehow implies his work belongs in some sort of cultural ghetto, which it most certainly does not. He's one of those artists that turns the specific into something universal and his short film work - the best known being The Colony and File Under Miscellaneous - clearly establishes him as one of the brightest young film talents in the world today regardless of ethnicity.

All of which makes it very exciting that Barnaby has now launched into production on his debut feature. Titled Rhymes For Young Ghouls the feature reunites Barnaby with frequent collaborator Glen Gould along with Kawennahere Devery Jacobs and Brandon Oakes (all pictured above) in a super dark revenge drama that recalls the general tone of The Colony. You can expect more coverage of this one as production continues and I recommend you take a look at the clip from The Colony below for a taste of Barnaby's style. The official press release also follows.

Montreal, October 23, 2012. - PROSPECTOR FILMS and the Canadian Film Centre (CFC) are pleased to announce that principal photography commenced this week on the feature drama RHYMES FOR YOUNG GHOULS. Filming will run from October 21 to November 22, 2012 in Montreal. Release is slated for Fall 2013.

RHYMES FOR YOUNG GHOULS is set on the Red Crow reservation in 1976. It tells the story of Aila (Devery Jacobs), a 14-year-old Mi'gMaq girl who has been rendered parentless by the suicide of her mother and imprisonment of her father Joseph (Gould). Aila's been left to the pathological parenting of her drug addled, dope-slinging uncle Burner (Oakes), who's raised her to become the weed princess of Red Crow. When her father, Joseph, is released from prison, he's determined to right past wrongs. But he faces a brother who doesn't want him upsetting the drug trade, a daughter who doesn't need him, and Popper, a psychotic Indian Agent who wants him back in prison or dead. What Joseph doesn't know is that Aila plans to leave the reserve upon his release. The only thing keeping her there is the drug money stolen from her by Popper and her affection for the lost boys of the local residential school, Saint Dymphna's. In a final bid to escape the reserve, she hatches a plot to rob Popper blind and get her revenge.

"I want to take the violence and sadness that exists on reserves, and create a human hero. I need to show Native people just how strong we are," said Barnaby.

RHYMES FOR YOUNG GHOULS was the only Canadian project selected to participate in the 2012 Tribeca All Access program, and the film's script won the Tribeca 2012 Creative Promise Award for Narrative.

RHYMES FOR YOUNG GHOULS is the 20th theatrical feature film to be developed and financed under CFC Features, and is supported by Astral's The Movie Network, Corus Entertainment's Movie Central, SODEC, Telefilm Canada, CFC and Astral's The Harold Greenberg Fund. Distribution is to be handled in Canada by Seville Pictures, with international sales handled by Entertainment One.

Do you feel this content is inappropriate or infringes upon your rights? Click here to report it, or see our DMCA policy.
Jeff BarnabyDevery JacobsGlen GouldBrandon OakesRoseanne SupernaultDrama